Today we're bringing you an excerpt from the latest issue of Jimmy Mengel's The Crow's Nest.

Jimmy was an expert on marijuana stocks before many dared to even evaluate them. As the sector matures, it is increasingly opening up massive potential for the non-intoxicating CBD in a host of products.

Read on for what I consider to be one of the best reads I've seen in an investment newsletter in a while, ranging from his personal experience, to America's long history with hemp, to its modern potential.

After a pullback this year, the marijuana sector is coiling up for another big push forward. Make sure you're positioned for the next wave of innovation and growth.

I spent the weekend in a secluded mountain cabin in Virginia — less than an hour from Thomas Jefferson’s famous mansion in Monticello. A dear old friend of mine needed some help with a new project he was working on, and when your friend needs free labor, you do your best to provide it.

When we pulled up to the cabin, it was nearing three in the morning; the air was crisp and cool, the stars were dancing, and the whole place stunk to high heaven.

I mean that in the best of ways.

You see, my buddy was recently awarded a hemp production license in the state. He bought an old plot of land from his uncle, whose family had owned 300-plus acres in these mountains for over a century. I took a moonlit walk to get a lay of the land and, high up on a rolling hill, I came across a family cemetery with some of their kinfolk who have been quietly resting since the early 1900s.

That wasn’t the only spot where you could feel the history: the entire mountainside is a throwback to a different time...

One of the neighbors is the town preacher.

Another spent an entire summer stripping his 1900s home down to the bones, sanding and staining each and every piece of wood, and placing them all back where they first stood.

Yet another spends his free time tracking the natural springs and making sure they are filling the mountains with potable water. I drank it right from the source, and it was as clean as clean can be. In fact, the fresh water streams also produced some of the best trout I’d ever had in my life.

The land is fed from those springs, which made the land and soil invaluable for farming. According to the locals I spoke with, they grew the finest potatoes and carrots in all of colonial America. 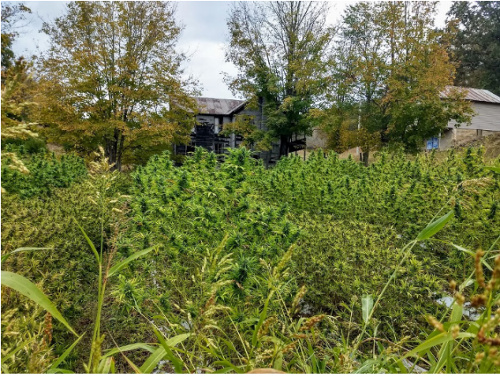 Here's a picture of me getting my hands dirty and working the fields: 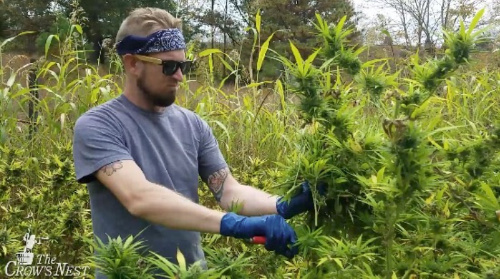 We spent the better part of three days trimming, drying, and labeling the several strands of hemp he had harvested. It was hard, honest work and I soaked in every moment of it.

After harvesting, we hung the plants up to dry in an old barn — with nothing more than a ball of twine strung from the ceiling, just like the founding fathers would have done. The hemp will sit and dry until the next round, where we will take seats around a large wooden table and carefully clip off all of the leaves, until just a fluffy bud remains. My friend will then sell the “premium flower” to some local shops around the area. He’ll fetch somewhere close to $500 a pound if he’s lucky.

But I’m getting a bit ahead of myself... Before we get into the money-making aspect of this process, no conversation about hemp is complete without a brief explanation of our country’s history with this versatile and valuable plant.

Our oldest navy ship, the USS Constitution, required 120,000 pounds of hemp fiber for the lines, rigging, and sails

In 1941, Henry Ford revealed a car that was made of hemp, soybeans, and plastics. It weighed 2,000 lbs., half the weight of a steel car. It also withstood ten times the impact... without denting.

Hemp was even used as a form of currency for some time in my home state of Maryland. In 1619, Virginia passed a law that required farmers to grow the plant, which could then be used as currency not only in Maryland, but Virginia and Pennsylvania as well.

It was once so important that citizens could even pay their taxes with hemp.

Hell, the U.S. government even released a propaganda video called Hemp For Victory in 1942 that pleaded for farmers to grow as much as possible. You can watch it here. (Spoiler alert, it is dreadfully boring)

Back to the founding fathers...

As I mentioned, Monticello was right around the corner. Thomas Jefferson himself was an early proponent of hemp, and grew it at Monticello and at his Poplar Forest plantation farther south in Bedford County.

He bred improved hemp varieties and even invented a special brake for crushing the plant’s stems during fiber processing.

He wrote in 1781 about the plant being “useful for fabrication.”

From The Thomas Jefferson Foundation:

“[H]emp. plough the ground for it early in the fall & very deep, if possible plough it again in Feb. before you sow it, which should be in March. a hand can tend 3. acres of hemp a year. tolerable ground yields 500. lb to the acre. you may generally count on 100 lb for every foot the hemp is over 4. f. high. a hand will break 60. or 70. lb a day, and even to 150. lb. if it is divided with an overseer, divide it as it is prepared. seed. to make hemp seed, make hills of the form & size of cucumber hills, from 4. to 6. f. apart, in proportion to the strength of the ground. prick about a dozen seeds into each hill, in different parts of it. when they come up thin them to two. as soon as the male plants have shed their farina, cut them up that the whole nourishment may go to the female plants. every plant thus ended will yield a quart of seed. a bushel of good brown seed is enough for an acre.”

The Virginia field I was working wasn’t quite that big or robust. While the soil is solid and the weather is decent, many Virginia hemp farmers in the old days took off for greener pastures in Kentucky…

Hemp crops quickly spread, and arrived in Kentucky with settlers from Virginia just prior to the Revolutionary War, according to a 1919 article in the Kentucky Agricultural Experiment Station Bulletin no. 22. These settlers set the stage for what would become one of the most important and long-standing hemp industries in America.

Kentucky farmers produced most American hemp until the late 1800s, when demand for sailcloth and cordage began to wane as steam ships dominated the seas. By the end of the Civil War, Kentucky was the only state with a significant hemp industry until World War I, and that state remained the nation’s leading producer of hemp seed.

Fast forward to today, and it’s no surprise that Kentucky’s most powerful politician — Senate Majority Leader Mitch McConnell — is a huge fan of hemp. In fact, McConnell has been touring the country, meeting with hemp farmers last month.

His message was clear: he wants his home state of Kentucky to become ground zero for U.S. hemp production. He helped push through legalization of hemp with last year’s Farm Bill — which federally legalized hemp production.

The Farm Bill has ushered in a massive new industry.

But despite the name, I don’t expect most of the money to be made in farming. While the hemp plant has over 50,000 uses, as seen in the below infographic, I don’t see too many investment opportunities in compost, animal bedding, or rope... 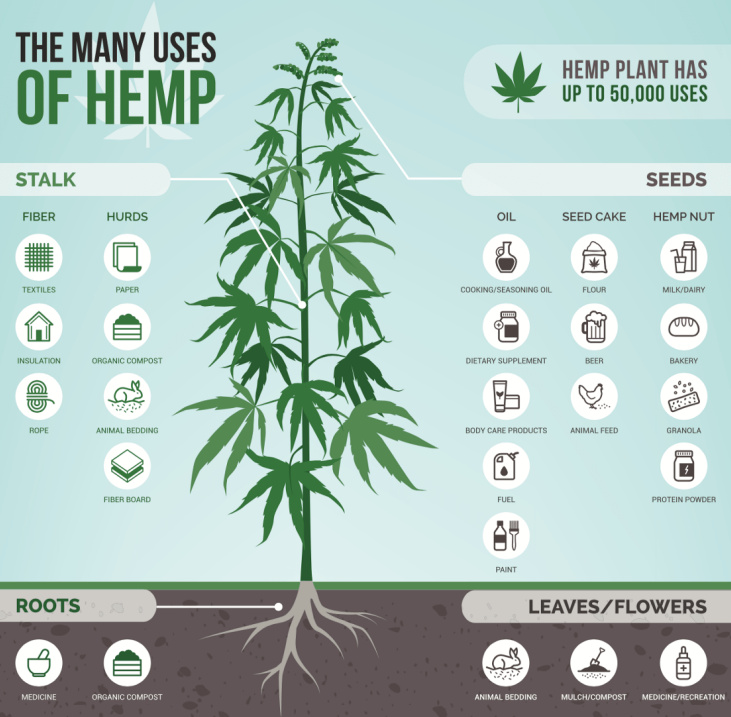 I mentioned that while my friend may pull in $500 a pound for “premium flower”, most of the hemp grown in places like Virginia and Kentucky will be used for cannabidiol — or CBD.

Contrary to popular belief, hemp is NOT marijuana. Hemp and marijuana are both cannabis plants, however, they are different varieties and have very different uses. Hemp doesn’t get people high.

But it does have copious amounts of CBD, which can be used in beverages, lotions, oils, and even pet food. It’s expected to be a multibillion-dollar business. Some projections have put CBD ABOVE marijuana in terms of sales. Cannabis analysts at the Brightfield Group have stated that “the hemp-CBD market alone could hit $22 billion by 2022.”