Sneak Peek: The Crow's Nest answers, "What kind of market is this?"

Today we're bringing you a sneak peek from Jimmy Mengel, editor of The Crow's Nest.

Jimmy and his readers are sitting on fantastic gains, with an open portfolio up over 48% and closed yearly portfolios totaling between 70% and 382% over the last five years.

Of course, the market has changed, and Jimmy and his readers are changing with it.

Read on for more from Jimmy about what this market is really like, and where he's looking for his next big gains.

That’s the newest catchall to describe a market that has been wildly volatile this year. Of course, a global pandemic will do that, however most of the movement in stocks has to do with the underlying fundamentals that have been lurking behind the curtain for a few years now.

I was as happy as anyone to ride what is now the biggest bull market in history. It couldn’t have been timed much better for me, to be honest. I started working here at Angel Publishing right after the housing meltdown and the beginning of the Great Recession.

It has been a great ride since then... Crow’s Nesters have scored yearly returns of 80%, 70%, 76%, and even 382% over the past four years. Runs like that don’t happen every day, as I’m sure any long-term investor knows all too well.

As for the market now, as Frankie Valli once sang, “You’re just too good to be true, can’t take my eyes off you.”

Over the last two years, I’ve warned that stocks seemed overvalued and the market was due for a correction. Yet every time I got wet feet, we’d see another record high.

However, with the coronavirus as the catalyst, it’s almost impossible to argue that the economy and stocks are looking good right now. It isn’t just me saying this. In a recent Bank of America survey, pretty much all of the experts agree that we’re looking at a long-term recession with huge implications for stock prices.

In fact, the vast majority of investors — 78% in fact — say the market is overpriced. That is the highest number since the survey began in 1998 and it even exceeds the levels during the dot-com bubble burst in 1999-2000.

Here are some other key findings from the survey, which was conducted with 212 mutual fund, hedge fund, and pension fund managers with $598 billion under management.

• 53% say the comeback from the March lows is a “bear market rally.”

• Only 18% expect a V-shaped economic recovery from the coronavirus. Most expect a U- or W-shaped recovery.

• The top “tail risk” investors fear is a second wave of coronavirus infections, with 49% citing that as a top concern, followed by permanent unemployment and a Democratic sweep in the election.

• 72% of investors say U.S. tech and growth stocks are the “most crowded trade.”

Not exactly a ringing endorsement of the latest “recovery”.

Personally, I wouldn’t call this a kangaroo market. I have a far more ominous moniker: an EKG market.

An EKG is an electrocardiogram, which is a machine that monitors electrical signals in the heart. It is used to determine heart rate, heart rhythm, and other information regarding the heart’s condition. 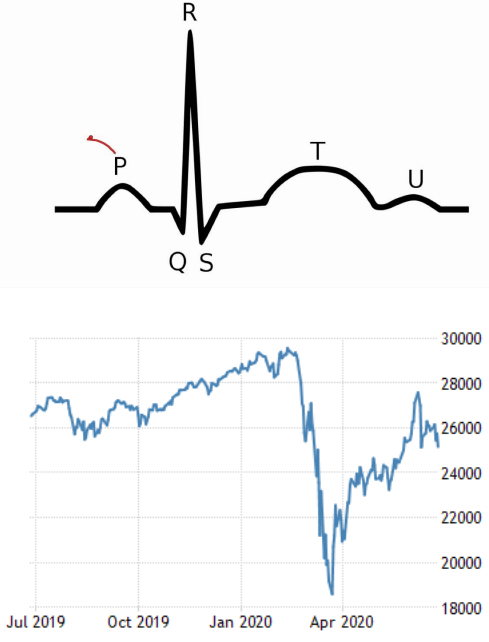 Once the heart reaches lows like seen in the charts above, one way to keep the patient alive is delivering an electrical charge to the heart with a defibrillator.

In this case, the Federal Reserve is the one manning the defibrillator paddles, and they’ve hit the market several times now.

Purchasing $80 billion of Treasuries and $40 billion of agency mortgage-backed securities each month?

These aggressive purchases have swelled the Fed’s balance sheet to $7.2 trillion. That’s almost 3 trillion more than they had at the end of 2019.

The total balance sheet is now eight times larger than before the Great Recession.

It is frighteningly stark in this chart from the St. Louis Fed: 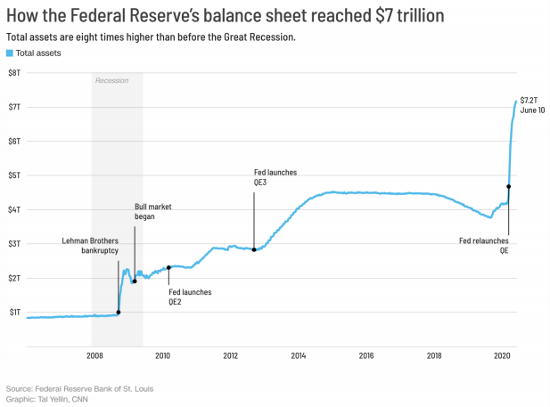 That number could conceivably hit $10 trillion by the end of the year.

They say that with a defibrillator, every shock they administer does permanent damage to the heart. You cannot just keep shocking the patient — their heart eventually stops.

Now, with a second wave of COVID-19 haunting the future of the country and the markets, it could be that the market’s heart will be too weak to withstand the Fed’s paddles, which by then could be almost out of juice.

That means they’ll have to resort to historical measures. It could mean that we’ll see negative interest rates and even the Fed buying stocks themselves.

Scott Minerd, global chief investment officer at Guggenheim Partners and an early predictor of the housing bubble, has warned that may be the only course of action the Fed has left.

“There’s a point where the Federal Reserve is going to have to pull out a bazooka,” Minerd said in an interview. “And I think the option of buying stocks on the part of the Fed is on the table.”

The mere idea of the Fed buying stocks is rife with controversy. Some straight-up argue that it is illegal based on the 1913 Federal Reserve Act signed into law by Woodrow Wilson.

It should be illegal if you ask me: when the Fed starts singling out specific companies and picking favorites, are we even living in a capitalistic society? What about the moral hazard of spending trillions of taxpayer dollars on stocks when you know you can just print more and more money to cover any losses?

Shouldn’t bad businesses have to fail in order for the system to truly work?

In any case, I expect the Fed to keep shocking the system until there is nothing left to shock. To continue on this morbid little rant, I’d be remiss if I didn’t mention that this EKG market has already claimed an actual life.

A 20-year-old college student committed suicide after racking up a massive debt using the trendy stock-trading app Robinhood. If you aren’t familiar, Robinhood makes it incredibly easy and fun to invest on your phone. It even pops confetti when you make trades.

It’s like a video game, but with actual money.

Alexander E. Kearns took his life after amassing what appeared to be a $730,165 loss on his trades. Like millions of other bored kids who were stuck at home, Kearns began day trading despite having no investment experience.

But instead of simply picking a hot stock and waiting for a big jump, it appears that Kearns went all-in with the much more complicated method of options, specifically a “bull put spread.”

A bull put spread consists of one short put with a higher strike price and one long put with a lower strike price. Both puts have the same underlying stock and the same expiration date. For an experienced options trader, this is actually a decent way to mitigate risk. But if you don’t know what you’re doing, it may appear that you are deep in the red until those options contracts actually expire.

Sadly, it appears that Kearns wasn’t as bad off as he thought...

"It’s not uncommon for cash and buying power to display negative after the first half of options are processed but before the second options are exercised—even if the portfolio remains positive,” according to Forbes.

I can’t blame people for wanting to speculate. When you see stocks jump hundreds of percent in just a couple of days, it looks awfully tempting to place a bet.

And a bet of risky stocks these days is exactly what it usually is: a coin flip for a big payday. Except now the odds are far from 50/ 50.

Speaking of betting, guess what one of the biggest Robinhood trading bets has been this year? Penn National Gaming (NASDAQ: PENN), an American operator of casinos and racetracks.

That bet paid off huge for a lot of people...

However, nobody buys at the lows and sells at the highs, and PENN is not at all a typical Robinhood trade. Take bankrupt car rental company Hertz for instance. Earlier this year, Hertz itself warned potential investors that they may lose all their money if they buy the company’s stock, and it would take a miracle for the company to avoid bankruptcy. The stock hit $0.55 in May — a 97% plunge in only four months.

But they didn’t get in at the bottom. According to Robinhood data, most stockholders got in when it jumped to $5.53. What’s it trading at now?

So you can see how inexperienced traders like Kearns can get easily swept up in the hype.

That’s why I don’t make wild, speculative short-term plays in The Crow’s Nest. I like to find great companies that we can buy and hold — even during “EKG Markets” like these. That’s why we invested actual video game companies that will continue to grow year over year — not crash and burn every other month based on the whims of a few million “video game” traders.

To get more insights and full issues from Jimmy, as well as see his #1 pick right now, check out this special presentation from The Crow's Nest.