Today we're bringing you a look at what Junior Mining Monthly's Gerardo Del Real sees as a great potential for profits in 2020. We should see a bottom in the lithium space followed by rapid gains in the best lithium and battery metal stocks.

Read on for an excerpt from the latest issue.

Our lone lithium holding, Advantage Lithium, has been a painful metaphor for the state of the lithium sector the last several years.

The good news is the trend — the electrification of everything — remains as strong and real as it was when I first mentioned it in 2016.

Volkswagen is ramping up production of electric cars to around 1 million vehicles by the end of 2022, according to manufacturing plans seen by Reuters.

Volkswagen is readying two Chinese factories to build electric cars next year. The Chinese plants will have a collective production capacity of 600,000 vehicles, according to company plans.

Tesla is still working towards its goal of making more than 500,000 cars a year by building a new factory in Shanghai, China.

I could go on, but you get the point.

The improved sentiment was an important takeaway from the “State of the Industry” speech recently given by Simon Moores of Benchmark Mineral Intelligence.

I encourage those of you interested in the space to watch the presentation. You can watch it here.

S&P Global Market Intelligence is forecasting substantial growth in lithium supply. Production of the battery metal is set to almost triple by 2025. 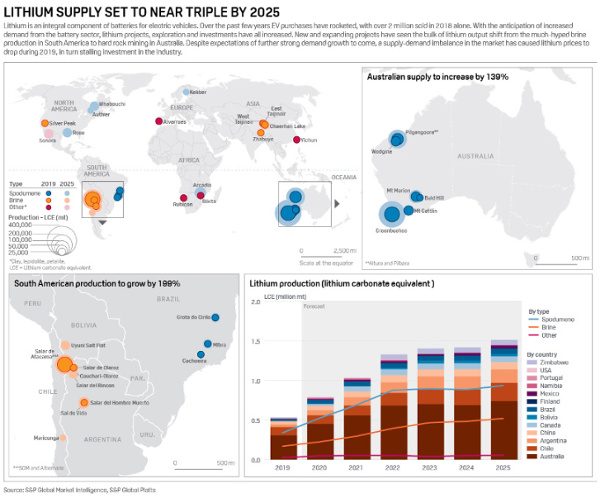 Joe Lowry, known as Mr. Lithium, spoke with INN recently and commented on the supply/demand factors impacting the sector and how he sees it playing out. You can watch that here.

“We are struggling to see how the demand is going to be there in battery quality by 2025, but the real question is if in the next three years there’s another million tonnes needed, where is that going to come from? Because we are not seeing the investment.

"Whether we are at the absolute bottom or whether that comes in Q1, what I believe is that once we get to a bottom it will stay there on the low end of the pricing until the excess inventory of spodumene and low-quality material are worked through.”

He added that he expects prices to start going up by the end of next year.

The problem Mr. Lowry sees potentially materializing is a simple one to understand.

Lower prices have put into question some of the supply that was due to come online.

Recent examples like Nemaska Lithium’s Whabouchi mine in Quebec, Canada, have faced management and financing hurdles.

China’s Tianqi Lithium’s plant in Western Australia began lithium hydroxide production in September and then announced the postponement of the second half of the 48,000 mt/year project, citing poor global lithium prices for the delay of the plant, which was initially expected to be commissioned in full by the end of 2019.

The main takeaway is the lack of investment for battery-grade lithium could cause another price spike if there is more demand than is currently forecast, a sentiment that was echoed recently by Simon Moores.

Moores also echoed my belief that not only will we see a rebound in battery-quality lithium prices but new real highs in the coming years.

That bodes well for the better projects in the space and is why I continue to hold lithium stocks in the portfolio.

As I’ve mentioned in the past, the electrification of everything extends beyond lithium. It includes copper, nickel, etc. The recent announcement by Pallinghurst and Traxys that they would invest up to $2 billion in mining projects for battery materials, including copper and nickel, was interesting not just for the dollar amount pledged but for where the two groups said they were looking... outside of South America.

The companies will not be targeting investments in continents such as resource-rich Africa and Latin America through the venture, only projects in North America, Europe, and Australasia.

“The electric vehicle and energy storage revolution is gaining pace. The future demand for the critical battery-grade materials is set for explosive growth,” said Arne Frandsen, co-founder of Pallinghurst.

Yes, I was early, but I firmly believe our positions have a very good chance at a substantial rebound. Take advantage of the current scenario to add to your speculative positions.

To get more insights and full issues from Gerardo, check out this special presentation from Junior Mining Monthly.