Silver Will Quickly Soar 15% or More

This summer, I did something that I am normally loath doing.

Now, 90% of the time, I think the only thing worse than the predictions of analysts working for institutional investors are the attempts by megabanks to create self-serving and self-fulfilling market predictions.

However, I had to agree with one from UBS back in early July — and I cited their predictions in this newsletter.

Here we are three months later, and I have to say they've done a pretty good job with their predictions...

Silver didn't bottom out at $17.50, but it did dip down to around $18.50. UBS also underestimated the price of silver in its prediction: The white metal is hovering around $22, instead of $20.50, three months after the report was published.

UBS was right about the trend — and there is a good chance that silver will end up near its 2013 average somewhere around $24 by year's end.

I don't think there's much time left to capitalize on a return to the average...

And if silver can break through resistance around $25, we'll see a much bigger gain.

So today let's take a look at some of the bullish trends in the news and technical indicators in a silver price chart. You don't want to miss out on what's to come.

Buying at a Fevered Pace

Sales of silver coins and bars continue to outstrip supply in the United States, Canada, and Australia.

Sales of the Austrian Philharmonic, Mexican Libertad, and Chinese silver panda coins are all consistently headed north. But this should come as no surprise to anyone following the news.

The real action, however, is in India.

According to the GFMS metals consultancy, India imported 4,073 tonnes of silver from January to August. In just two-thirds of the year, India had already more than doubled the 1,921 tonnes of silver imports in 2012. The country is on pace to hit roughly 6,100 tonnes, which would work out to a 217% year-to-year increase. It would also beat the record 5,048 imported in 2008 by 20%.

Of course, some external manipulation is at play here, which should make you wary...

Gold imports and sales are being curtailed in India through two measures: First, gold importers are required to sell at least 20% of their purchases through exports; and second, the import duty used to chill sales was raised from 6% to 10%.

Silver faces the same import duty. But with the massive difference in gold and silver prices, it is clear that gold is simply impractical with the current restrictions.

Indian gold imports, which averaged out to 60 tonnes per month from April to September 25, collapsed to a mere 10.5 tonnes in August and September combined.

The gold market would come roaring back if these external market forces were removed any time soon...

Trade imbalance would once again turn against the Indian economy. Inflation would go from bad to worse. Even now, the rampant inflation in the rupee has strongly reinforced this bias towards precious metals.

A lion's share of the imported silver is working its way out to rural areas, where a strong monsoon season boosted harvests and led to increased disposable income. Traditionally, this income and any long-term savings are stored in the form of gold. In the current climate, it is clear that silver is now favored.

Considering the value of silver imports into India were valued at $1.8 billion in 2012, while gold imports were valued at $52 billion, there is a whole lot of money that could pour into silver.

So join Outsider Club today for FREE. You'll learn how to take control of your finances, manage your own investments, and beat "the system" on your own terms. Become a member today, and get our latest free report: "Silver: A Better Bet Than Gold."

Trek across the Himalayas, and you'll find demand for silver is stealthily building up.

Chinese imports have declined this year, but this isn't due to silver losing its luster...

It is all about increased production.

China has been trying to reduce costs and reliance on imports by boosting production.

Silver is often recovered from base metal mines. Globally, 71% of mines sell silver as a byproduct of their operations. In China, that figure is closer to 95%.

In 2011, production at China's copper, lead, and zinc mines jumped an average of 57%. That pushed China's silver production up significantly, while direct mining operations were boosted 100 tonnes between 2011 and 2012.

The trend has continued, but that kind of growth rate is obviously unsustainable. We're seeing the fallout from the massive boost in import figures right now, but it will not persist for much longer.

While Chinese investors account for about 8% of global coin and bullion sales and rising, the size of the domestic silver market is dominated by industrial usage. China may boost production, but it will gladly import silver to manufacture electronics, solar panels, and other critical industrial materials and products.

The government is growing the number of solar power installations from 2.6 gigawatts in 2011 to 21 gigawatts by 2015. It has supported manufacturers through lean times during the recession, while aggressively building business ties around the world over the last five years.

As the global recession thaws, more exports are virtually guaranteed.

As miners shutter operations and restrict supply for the next several years, we're seeing a strong reason to get into silver right now.

Looking at the technical aspects of silver price charts, it is clear that depressed silver prices have finally leveled out and only have strong upside potential.

Take a look at the following chart. 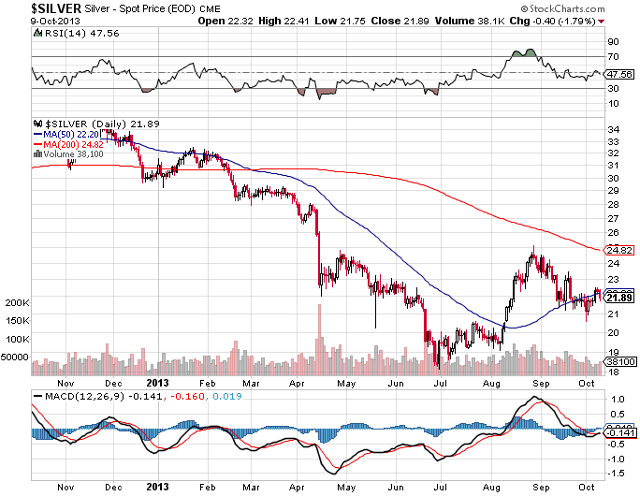 First up, we have a "head and shoulders bottom" forming in silver prices. This has taken half a year to form, suggesting it's a major bottom affecting the long-term trend — not an aberration or temporary factor.

Next, looking at the RSI indicator at the top, we see the spike through August has subsided. We're out of "overbought" territory. This is supported by declining spikes in volume in the mid-April and late June sell-offs. Volume during the September decline in prices didn't even budge.

The sellers are out, and balance with buyers has been restored.

Finally, we have the MACD line crossing the signal line and the divergence between the MACD and signal line is gone. This supports a change in trend. Add in the upward movement that is poised to cross the zero line, and we can determine that upward price momentum is building.

Bottom line: All of these factors point to an increase in silver prices.

At the very least, every indication points to a short-term bounce to $25, good for a potential 15% gain.

There will be resistance around $25 per ounce. If that breaks, silver prices could easily run past $30 and erase year-to-date losses.

We have a tight window to pad our portfolios with limited exposure to a stock market that has yet to price in massive downside potential of a government default...

Whether that happens next week or becomes a threat again in six weeks, if a temporary increase is negotiated, it won't matter to investors who capitalize on this great entry point.