Should I Stay or Should I Go?

I spent the last week in the beautiful colonial city of Antigua, Guatemala. It was founded by Spanish conquistadors in the 16th century and serves as a living monument to Catholicism. Antigua is flanked by three massive volcanoes hovering like gods over the city center. The cobblestone streets snake around dilapidated churches, monasteries and shrines. The town is alive with blessed charisma and an almost ghostly charm. 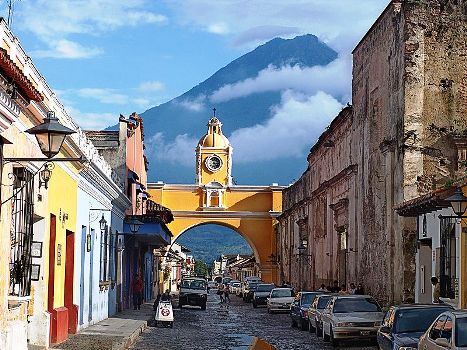 Needless to say it was a nice respite from the day to day analysis of chaotic financial news. But alas, even in the warm embrace of an exotic vacation, I was unable to stray too far from turmoil at home...

After our first day of taking in the earthquake ravaged architecture, my wife and I slipped into a side street restaurant to outline the remainder of our trip. We were both enchanted by what we'd seen -- and feeling a little warm and fuzzy after some Guatemalan rum -- so we began to imagine what it would be like to move to place like Antigua in our 'golden' years. We could rest, relax and live like kings for a fraction of the cost of the United States...

We had basically sold ourselves on the move by the time we finished off our fried plantains and pollo en jocón. It was then that I heard a woman shout, in perfect English: “They won't even let us drink large sodas anymore!”

A fired-up lady in her late fifties was talking to a fellow Yank at the table behind us...and she didn't seem pleased. As our check arrived, I asked the pair where they were from, she said New York; he answered Northern Virginia.

“But I live down here ten months of the year,” she continued. “It's beautiful, it's cheap and frankly...I just couldn't stand it anymore up there. At least down here you don't have the state breathing down your neck!” She had plenty of other gripes too, from tax codes to job prospects to nationalized healthcare -- and a few other colorful remarks not fit for these pages.

The gentleman told me he was riding his motorcycle across Central and South America and didn't seem to have a care – political or otherwise – in the world. Yet he also praised the lifestyle he could afford in Guatemala and mentioned that he intended to settle in neighboring Belize after his bike trip was over.

Now, Guatemala’s government is a crooked as a three-legged street dog. The fact that a place like this is more attractive then the grand old U S of A is a crying shame. But time and time again, we ran into Americans that had either settled in Antigua for their retirement or opened up a business in a place where it was friendly to do so...

In fact over three million Americans are currently planning retire overseas for these exact reasons.

For those in the U.S., Latin American is an obvious starting point for locational and logistical reasons. These countries are cheap, gorgeous and ready for visitors. International Living has released their 21st annual index of top retirement spots for erstwhile Americans:

All of these countries have an attractive combinations of low costs of living, affordable real estate, decent health care, retirement infrastructure and copius entertainment options. Bascially everything you need for a fullfilling retirement -- and likely what you may be missing by retiring here in the States.

Take Dan Prescher, who moved to a gated community in Cotacachi, Ecuador. His home has a glorious view of the Andes mountains and it only set him back $50,000.

"Every now and then, [my wife and I] think it would be nice to have a place in the states, so we run the numbers," Prescher told the Wharton School of Business. "But because of the high taxes, medical costs and insurance, we just can't figure out a way to live as affordably as we do here. The cost of living is half of what it would be in the U.S."

And he's not kidding, check out some of these cost comparisons from the Wharton School of Business:

Real estate in San Jose, Costa Rica, for instance, is 57% lower than in Philadelphia. Consumer prices in Chiang Mai, Thailand, are 59% lower than in Boston. Groceries in Seville, Spain, are 36% lower than in San Francisco.

If you've found yourself in the position of millions of Americans whose retirement savings aren't measuring up to the quality of life you want and deserve, then expatriating may be well worth a good, hard look. We'll highlight some of the best "escape hatch" destinations in the Outsider Club in weeks to come.

Jimmy Mengel for the Outsider Club