Shocking Tales of the Drug War

Legal Marijuana Could Save Lives

The Sinaloa Cartel is perhaps the most brutal drug trafficking group in history. The Mexican criminal enterprise has been running marijuana, heroin, cocaine, and methamphetamines into the United States since the 1960s.

It has been the major player in the Mexican Drug War, which has been officially responsible for over 60,000 deaths and 12,000 kidnappings. The unofficial numbers, however, are even more harrowing. Between 2007 and 2014, there were more murders in Mexico — 164,000 — than there were in the war zones of Iraq and Afghanistan combined.

To say that these guys rule with an iron fist is an understatement...

In one shocking “message”, the cartel skinned a rival's face and stitched it into a soccer ball.

The head was wrapped in a plastic bag and dumped next to City Hall, with a chilling note attached that read: "Happy New Year, because this will be your last."

That head belonged to Hugo Hernandez, who was kidnapped in Sonora, an area well known for its massive marijuana growing operations.

Now, I'm not telling you these things to terrify or shock you. I'm writing about them because these grisly acts may be less and less common now that marijuana has started to be legalized in the United States.

And as an investor (and a human being that would like to see fewer heads getting chopped off) I couldn't be happier about where things are headed...

Of all of the businesses in the world, the drug trade certainly takes the cake for being the most ruthless. These criminals murder, torture, and strong-arm their way into billions and billions of dollars. The leader of the Sinaloa cartel, Joaquin Guzmán — or "El Chapo" — is estimated to be worth north of $1.4 billion!

It is so huge and powerful that it was laundering hundreds of millions of dollars of its ill-gotten gains through the British Bank HSBC (fittingly, as banks are perhaps the second most ruthless business out there).

The U.S. Justice Department noted that cartel members would show up at a bank branch and “deposit hundreds of thousands of dollars in cash, in a single day, into a single account, using boxes designed to fit the precise dimensions of the teller windows.”

This is a well-organized, well-funded operation that is seriously concerned about the effect that widespread legalization will have on its bottom line. And it should be...

U.S. legalization has driven the price of marijuana down by an astounding rate.

The U.S. Border Patrol has shown that marijuana seizures in the past year have fallen to their lowest levels in a decade. While federal agents were seizing 4 million pounds of marijuana in 2009, last year they seized “only” 1.5 million pounds. 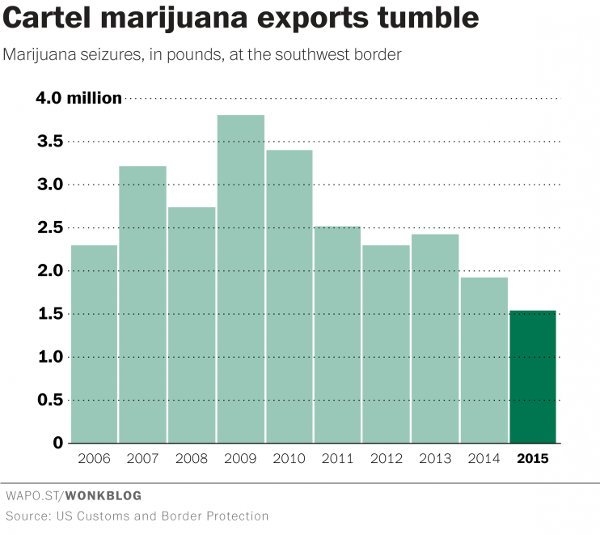 While that still sounds like a ton of contraband, a drop like that seriously cuts into the easy profits that bloodthirsty cartels have been raking in for years.

And it isn't just the border towns that are seeing a drastic decline in arrests and seizures...

In Washington D.C., which decriminalized marijuana possession last year, possession arrests have decreased an incredible 98% and total marijuana-related arrests are down 85%.

Washington State, which opened its first legal pot shops in 2014, has seen a tremendous drop in violent crime and arrests. From the Drug Policy Alliance:

What's more, Washington has seen no uptick in youth marijuana use or traffic accidents, which are two of the bogeymen that anti-marijuana advocates cite as a reason to keep the plant illegal.

"Marijuana prohibition has been a costly failure — to individuals, communities, and the entire country,” according to Tamar Todd, the Drug Policy Alliance director of marijuana law and policy.

“Washington should be praised for developing a smarter, more responsible approach to marijuana. By shifting away from unnecessary marijuana arrests and focusing instead on public health, Washington is better positioned to address the potential harms of marijuana use, while also diminishing many of the worst harms of the war on drugs."

Perhaps most impressively, since Colorado has "legalized it", its marijuana shops have sold $996,184,788 worth of recreational and medical marijuana. Of that money, Colorado collected $135 million in marijuana taxes and fees last year, of which $35 million will be pumped into school construction projects.

That's right, a billion dollars that would have otherwise gone tax-free into the hands of cutthroat drug lords is now flooding into state funds. That means that instead of spending countless millions of dollars to lock people up for petty drug crimes, states are now raking in cash to spend on schools and health care.

Which would you rather have? More money for schools or money flowing into cartel coffers which they'll use to bribe, intimidate, and chop peoples' heads off?

I think it's a pretty easy decision...

Obviously, we'd all like to see less violence and bloodshed from criminal gangs. We'd also like to see more tax money flowing into states that desperately need it. And as investors, I think we'd all like a front row seat to a massive new industry.

Right now, the legal marijuana industry in the U.S. pulled in $5.4 billion last year. That's billion with a 'B'. Just think about that...

Once the others fall into place, we could be looking at a $200 billion industry.