Special Report: Three Semiconductor Stocks That Are a CHIP off the Old Block

We’ve all been there — you’re on your computer and the webpage you pull up is taking a tad bit slower to fully load.

You wonder what the holdup is, and then you realize you have over a dozen tabs active on your browser.

Yes, your computer was marketed as efficient enough to take this workload, but that could have been two years ago.

This is where Moore’s law comes into effect.

The forecast on the constantly growing number of components on an integrated circuit conjured by Gordon Moore in 1965 is one that great minds in technology apply to their work (and our products) constantly.

The more transmitters, the merrier. The number of transmitters on a microprocessor has doubled every year since the conception of Moore’s law, as predicted.

So when you compare the speed of the computer you purchased two years ago with a model just a year younger than it, you now understand the influence of Moore’s law.

Artificial intelligence (AI), the internet of things (IOT), and 5G merge together on multiple platforms each day. One thing that will eventually be applied to innovate the three could possibly default Moore’s law.

That one thing is an alternative semiconductor. Something AI, IOT, or 5G soon won’t be able to function without.

Let’s get the facts straight: Without a semiconductor, there would be nothing to map the flow of electrons in a microprocessor to allow it to function.

Semiconductors made for microprocessor performance have found a stall in efficiency about five years ago. Given their high rate of usage, this raises concerns.

There’s a plateau of sorts with performance but an increase in demand for computing power.

What does a market do when it plateaus? It changes.

By 2022, the combined chip market could be valued at $5.1 trillion. Four years after that, the value is expected to triple.

There’s now a $1.5 billion project initiated by the Defense Department to develop semiconductors that stray from the limitations of silicon, which is usually what microprocessors are constructed from.

Rebranding is inevitable when the entire infrastructure of semiconductors could change very soon.

Since their plateau four years ago, companies that supply semiconductors prioritize two main components in their possible change: low energy and high power.

These companies are the big players in maintaining both their recent and future innovations.

Leading in the supply of electrical testing and measuring gear to the semiconductor industry, FormFactor has caught a good amount of attention over the past few months.

This is due to its share price on the Nasdaq inching higher and higher.

The increase FormFactor is forecast to see in the near future is healthy and steady. From what it looks like in the graph, FormFactor is in the midst of a 62% rise.

Right now is the ideal time to consider FormFactor because its share price is 20.5% undervalued at the moment, trading at roughly $46 a share.

Having holdings with FormFactor now as they accumulate before the price of each share grows in value would place you in a comfortable position.

But the question is what are they doing that is causing such a positive outlook?

It’s no accident that FormFactor is on the rise.

Its MeasureOne partnership is one of the catalysts of the company's surge.

FormFactor has figured out an application that can withstand the high voltage required to test these semiconductor devices.

Semiconductors are found in almost every electric and hybrid-electric vehicle.

Since the demand for electric vehicles is nowhere near a decline, this expands the market for FormFactor and its partnerships.

The compound annual growth rate (CAGR) for electric or hybrid-electric vehicles is projected at 21% until 2024, exceeding $3.7 billion.

The chip shortage did the EV market no favors; semiconductor manufacturers are scrambling to provide for electronic makers with higher demand like Apple.

The current economic climate couldn't be more ideal for FormFactor. In the past year, returns were at 72.1% — 28% over the U.S. semiconductor industry’s as a whole.

There’s a great deal of optimism toward the future for TSM.

By market capitalization, TSM is the largest chip company in the world.

TSM has high hopes for itself, expecting $12.7 billion in sales just for the first quarter of 2021.

By comparison, Wall Street analysts estimate $12.38 billion in sales. It’s not too far off, but TSM's optimism isn’t unwarranted.

In December 2020, TSM invested $200 billion toward building a plant in Taiwan for Entegris.

Entegris is a provider responsible for transporting semiconductor materials. The company is also a leading provider of high-end filters, which are vital in the production of chemicals and liquids that compose chips.

TSM is considered Entegris’ top customer, so it’s no surprise that TSM is investing heavily in Entegris.

The plant will be located in Kaohsiung, on the same island as the headquarters of TSM and a good three-hour drive between the two.

The extreme shortening in distance makes a huge dent in testing and manufacturing time brackets that may have been a hurdle in production before.

The faster testing, production, and transportation are done, the faster the market can be supplied.

Taiwan isn’t the only place where TSM is building plants — there are plans to construct a plant in Arizona so there is still a connection between TSM and its U.S. customers.

In a chip shortage where providers are forced to be extremely frugal with their products, TSM comes in handy. 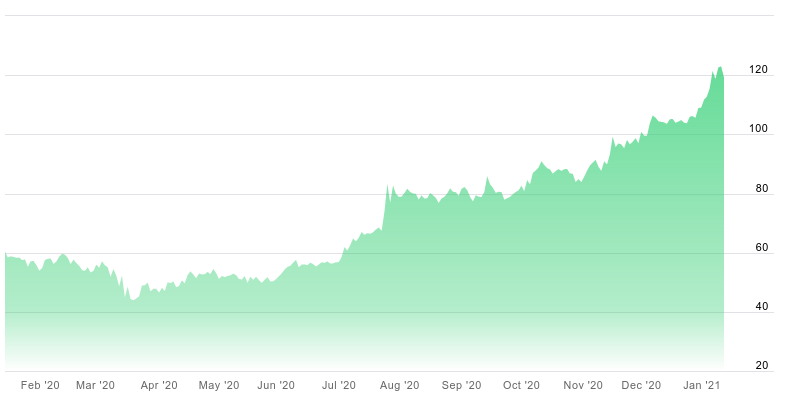 TSM is seeing massive increases in share prices. Just in the last year, TSM has seen an 111% increase.

TSM all but caused a semiconductor chip rally when the announcement of the $28 billion capital spending budget for 2021 reached the press.

A good 80% of the budget is solely for advanced processing technologies, in the hope of causing a surge in chip manufacturing.

Taking advantage of a slipup on Intel’s end, TSM has taken responsibility for a good amount of outsourced production of 15%–20% of its chips.

This is yet another reason to believe TSM is a big winner in one the most lucrative markets right now. Overseeing the production of different types of chips like non-CPUs for other large companies demonstrates its competence and versatility.

Qorvo supplies Apple with chips just like all the other big names, but Qorvo's are radio frequency (RF) chips.

The annual growth rate is 8.5% for the market, thanks to increasing demand for RF devices for smartphones.

Gallium nitride makes up the RF semiconductors, which are 10%–15% more powerful than silicon in terms of voltage, power density, frequency, efficiency, and thermal conductivity.

This North Carolina-based semiconductor company had quite the rally recently.

In the past month, shares gained over 15% and the company is projected to report $2.66 earnings per share at its next earnings report date.

Quarterly revenue has reached $1.06 billion, 22.37% up from the same quarter last year.

The RF industry, which is part of the computer-and-tech sector, earned a Zacks Industry Rank 35% higher than of all 250+ industries in the sector. 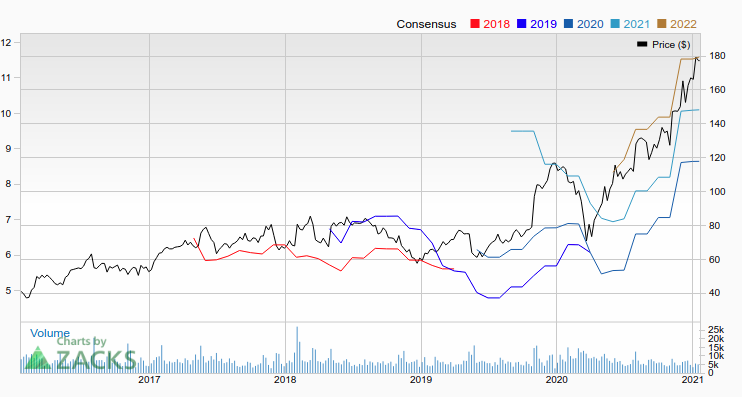 To paraphrase: FormFactor is a pristine testing ground, Taiwan Semiconductor Manufacturing makes the gear, and Qorvo is climbing up to join the rest of the party.

Hexcel of course follows along with manufacturing tech.

Before the pandemic, Hexcel traded around $80 a share. Currently, there’s been a slight dip and shares are being sold around $46.

Since 2005, Hexcel has provided products containing nanomaterials for customer evaluations.

It’s safe to say it may be ahead of the curve.

Hexcel is one of the key players in the single-wall carbon nanotube market.

Single-wall carbon nanotubes are an atom thick and made out of graphene. They’re said to be 1,000 times more powerful than silicon chips.

They can be integrated into lithium batteries, too.

Hexcel has had some hurdles with debt, with no help from the pandemic. Revenues are half of what they were this time last year.

However, there’s a silver lining to this.

Remember, there’s a chip shortage as we speak.

So consumer demand is expected to pick up now that vaccines are being distributed.

A company that has been working on carbon nanotubes for almost two decades will definitely see a brighter future.

The public doesn't know much about what we call “God Chip” technology.

By the time you’re finished reading Mengel’s report in our premium publication The Crow’s Nest, you’ll never look at your laptop or smartphone the same way.