We love dividends and think they are the single best way to safely grow your money.

In fact, you can thank dividends for a massive chunk of the long-term total return of the S&P 500.

According to a report by the Guinness Atkinson Funds, dividends and dividend reinvestment made up a whopping 90% of returns from 1940 to 2011! 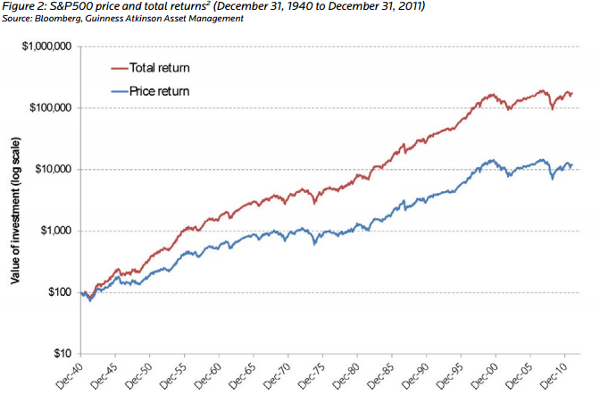 I’d say that’s a heck of a difference...

However, like the chart showed, dividend stocks don't make you wealthy overnight. Often you have to wait years to seriously see a big return. That's why the risk level is so low.

“Special” dividends, however, are designed to reward shareholders with a large cash delivery all at one time — usually hundreds of millions of dollars delivered in one fell swoop.

Why do companies do this?

Sometimes it's for tax savings...

Sometimes it's to reorganize the business...

Sometimes, it's just the equivalent of a company puffing its chest out and bragging about its success...

For those of you who have not been fortunate enough to collect one of these one-time windfalls, let me give you a brief history.

Last year, Costco Wholesale Corp. (NASDAQ: COST) announced a special dividend of $5 per share, which would deliver a whopping $2.2 billion to shareholders. Costco, which sells bulk groceries as well as fuel, posted great numbers despite an overall weakness in retail sales.

Another example is the recent merger of Kraft Foods with H.J. Heinz Co., which created an absolute giant in the food industry. It brought together Heinz's "World's Favorite Ketchup" with Kraft's iconic Oscar Mayer and Velveeta brands.

When the merger was announced, Warren Buffett's Berkshire Hathaway sweetened the deal by setting aside a cool $10 billion special dividend for Kraft investors — or $16.50 for every share.

Needless to say, the deal went through, due in no small part to the instant flood of money to Kraft investors.

Can you see why these windfalls are so valuable?

While Costco and Heinz are two of the biggest examples, there are plenty of other one-time dividend payouts that have rewarded investors.

Now, you'll notice that these companies were not nearly as well-known as Costco, which is extremely important when you are trying to collect the most yield. You see, the Costco special dividend was well-known, so investors crowded into the stock for that one-time payout.

When that happens, the stock price goes up and the dividend yield goes down. In essence, your dividend gets choked off and you don't see nearly as much return.

So you want to make sure you are investing in a company that you would actually want to own already — and hold for a while after the special dividend.

Here are three little-known special dividends that you could have bought at the end of last year, and already cashed out by now.

FutureFuel is a developer and producer of chemicals and biofuels.

PRA just declared a special dividend of $4.69 per share. Additionally, a regular quarterly dividend of 31 cents was declared. Both dividends were paid on January 9, 2017 to shareholders on record as of Dec 23, 2016.

It has done the same thing over the last few years, rewarding shareholders with special dividends in 2012, 2014, and 2015.

PharmAthene is a biodefense company developing medical countermeasures against anthrax.

It has just declared a special dividend of $2.91 per share.

There you go — buy in, hold on, and cash out. Special dividends are a great way to bank some immediate income.

Keep your eyes on Outsider Club for all of the latest special dividends coming down the pike. You can also check them in real time each week here and here.