Special Report: How to Profit Using the VIX Indicator

The Ultimate "Fear Gauge" for Beating the Crowds to Profit

Investors are motivated by two things and two things only: fear and greed.

It may be as cliché as it gets, but it's just that simple.

More often than not, they turn quite bullish when they think a stock is headed higher and quite bearish when they fear that all is lost.

The trouble with this strategy is that, for most retail investors, it is exactly at these extremes in sentiment when they lose their shirts...

While conventional financial theory does suggest the idea that markets behave rationally, not accounting for the emotional aspect of the trade, this often leads to all of the wrong entry and exit points.

And believe me when I tell you this: It's hard to make any money on the Street when you're constantly getting either one or both of them wrong.

That's why successful technical analysts often rely on the VIX indicator to assess whether or not the current market sentiment is either excessively bullish or bearish in order to plot their next move.

The VIX is one of the so-called contrarian indicators.

It is incredibly useful in determining whether the markets have reached an extreme position one way or the other. When that happens, it tends to be a sure sign that the markets are about to stage a reversal.

When a wide majority believes that one bet is such a sure thing, they pile on and chase after gains. Unfortunately for them, the market is usually ready to turn the other way by the time they jump into a position.

If "the crowd" is feeling very bullish, in other words, it is definitely time to think about getting bearish.

Smart investors simply use the VIX indicator to determine when to bet against them all. It's counter-intuitive for sure, but it works nearly all of the time — especially in volatile markets. And that's why the VIX indicator is a trader's best friend these days.

After all, in today's market there are definitely a lot of people chasing gains that already happened. There are also plenty of skittish investors fearing the end of quantitative easing and a market correction.

So, What Is the VIX Indicator?

Developed by the Chicago Board Options Exchange in 1993, the CBOE Volatility Index (Chicago Options: ^VIX) is one of the most widely accepted methods to gauge stock market volatility.

Using short-term, near-the-money call and put options, the index measures the implied volatility of S&P 500 Index options over the next 30-day period.

It is basically a derivative of a derivative. Because of that, it acts more like a market thermometer more than anything else. And just like a thermometer, there are specific numbers that tell the market's story.

A level below 20 is generally considered to be bearish, indicating that investors have become overly complacent. Meanwhile, with a reading of greater than 30, a high level of investor fear is implied, which is bullish from a contrarian point of view.

The smart thing to do then is to wait for peaks in the VIX above 30 and wait for the VIX to start to decline before placing your buy. As the volatility declines, stocks in general will rise and you can make big profits.

You see it time and time again. In fact, the old saying with the VIX is, "When the VIX is high, it's time to buy."

That's because when volatility is high and rising, that means the crowd is panicked. It leads to selling based on fear and quickly falling stock prices. That creates a short window where there are bargains in the market for moneymaking traders.

The VIX Indicator in Action

Here's a couple examples of how it works in the real world...

First up is a series of three classic reversals in the S&P 500 back in 2008. Each one of them successfully predicted by the VIX using its 200-day moving average (DMA) as the basis of each move.

Take a look at the charts:

As you can see, every time the VIX either breached or touched its 200 DMA, the S&P reversed and began to decline. And not surprisingly, each of those moves occurred when the index told us that fear levels were low.

A perfect example of a crossover can be found back in 2010: 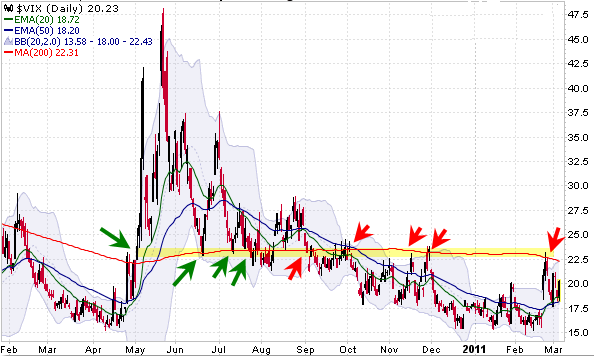 The inverted scenario was in full effect in the first half of 2013 as well. Every time the VIX breached the 200 day moving average, it quickly fell. The spikes were tied to drops in the S&P 500, which became attractive entry points as the market rebounded:

Note that the pattern may invert, but the VIX spikes represent a good time to jump into the market regardless of the pattern in play.

For smart and disciplined traders, each occasion was the equivalent of taking candy from a baby, simply by betting against the "wisdom" of the crowd.

How to Play Market Volatility

On top of those levels, smart traders also add the price movement within the Bollinger Bands into the mix. Of late, that has been one of the key tells in predicting the market action.

What are Bollinger Bands, you ask?

Bollinger Bands are a popular technical indicator for traders to determine overbought and oversold conditions. In a range-bound market, for example, it works even better as prices travel between two "rubber bands," or like balls bouncing off the walls of a racquetball game.

For instance, in the VIX chart below you can actually see these "rubber bands" in action:

As the VIX trades, volatility rises or falls as it bounces off of the upper or lower bands.

It's these extremes that have marked the major market turning points from a contrarian perspective.

One way to play these market moves is by trading between these two exchange-traded funds (ETFs):

These and other winning options strategies can help you put fear and greed in their place, earning you big profits as you trade the extremes in market sentiment.

Now may be a better time then ever. With muted hints at tapering and ending QE, the market has been shuddering. It has been a long time since news from the Fed has been in play in the market.

Recent all-time highs in the indices have sputtered. The VIX is trending up overall. People are still in the market due to greed, but they're ready to run for the hills due to fear.

That's why the VIX Indicator is so popular these days. So don't trade without it.

After all, if there is one other thing that we know for sure about fear and greed, it is that they never ever take a break...

Use them to your advantage.

Thanks for subscribing to the Outsider Club. We'll continue to find ways to boost your portfolio with flexible and safe investments that will help you break free of the traditional trading advantages, traps, and pitfalls financial institutions use to siphon off your wealth...