Special Report: Getting in on the Electric Vehicle Boom

Electric vehicles (EVs) are getting lots of attention these days. They produce no emissions, their engines are much simpler than internal combustion motors, and their batteries (which generate their power) are getting better and smaller all the time. 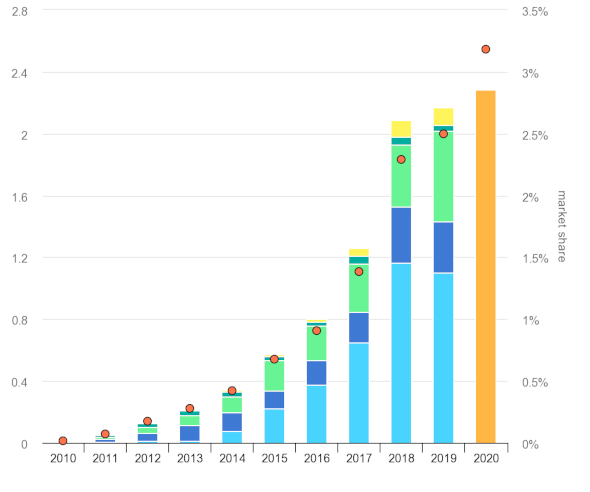 And we must point out that almost half of 2020 remained when this chart was created — and of course that EV sales, like those of practically all non-essential goods, have dropped sharply this year due to the global pandemic.

From what automakers are saying, that explosive growth is expected to continue. Manufacturers project that in just seven short years, EV sales will jump 600% more, to about 15 million worldwide. And they’ll invest more than $200 billion in electric vehicles, resulting in hundreds of new models.

Batteries will be the key. Since battery technology is improving so rapidly, EVs are on the verge of becoming more attractive to many more drivers because their batteries will let them go farther on one charge. For example, by 2024, driving an all-electric car with a range of up to 150 miles should actually cost less than driving a conventional vehicle that same distance. And by 2029, you should be able to get that same value from an EV with a robust range of 300 miles per charge:

Car-makers project that SUVs and crossovers will break these cost barriers a few years later.

Tesla may well be the only EV manufacturer you’ve heard of so far. That’s because it’s the 800-pound gorilla, at least in the U.S. But other exclusively-EV producers are sprouting up and major car-makers like Ford are now jumping into the fray.

But if you’re considering investing in EVs now, you’ll also have to look at China. Many people don’t know that China was the first country to roll out EVs on a massive scale. In 2019, nearly half of all EVs on the road worldwide — 47% — were in China. Besides having the world’s largest population and therefore the biggest potential market, China’s government heavily backs many vehicle manufacturers, giving them an almost-automatic leg up in competing against foreign car-makers.

If you want to buy American and like good branding, you have to start with Tesla, the only EV manufacturer to become a household name in the U.S. so far. And it’s still a great investment opportunity — its stock value has jumped almost 400% so far this year. Tesla generated $24.6 billion in revenue last year.

In the most recent quarter (Q2 2020), Tesla said it boosted the range of its mainstay Model S car to an excellent 402 miles, picked the site for its next U.S. battery “Gigafactory”, and continued boosting production rates for its Model Y and China-made Model 3 vehicles. In addition, the company plans to start building three factories on three different continents by year’s end.

However, some experts believe its stock is overvalued. And while Elon Musk, its founder and CEO, has been described as a genius, he’s also been called unpredictable and eccentric — not necessarily qualities you want in the CEO of a prominent publicly traded company. And Tesla stock, at almost $400 per share (as of Sept. 23, 2020), isn’t exactly cheap, so the average investor could buy far fewer Tesla shares than of another EV stock that might be a great play.

If you want to explore the Chinese EV world, you’ll probably want to start with Nio. This company, which some call “the Tesla of China,” is its best-known and most prominent EV manufacturer so far.

Like Tesla, it focuses largely on the luxury market. Its three current models are the seven-seat ES8 SUV, five-seat ES6 high-performance SUV, and EC6 five-seat electric coupe. And like Tesla, Nio is also trying to make its cars as high-tech as possible, by letting them connect with other devices, drive by themselves, and make the most of artificial intelligence (AI).

In addition, Nio offers a range of charging options to address the key issue of keeping EVs juiced up despite a limited charging infrastructure, in China and elsewhere. These include a home charging system, a service that lets owners swap out batteries instead of taking up to hours to recharge, and a fleet of charging trucks.

And Nio is hard-charging when it comes to the stock market — its value grew more than 500% over the past year. But that still leaves it priced at under $20 per share, so smaller investors should still be able to afford a nice chunk of shares if they want. Nio’s 2019 revenue was $1.124 billion.

Li is one of a relatively small number of Chinese EV companies besides Nio that American investors are noticing. Like Nio, Li also focuses on smart technology and autonomous driving options. But it also has two major differences from the current Chinese EV leader: Li makes its own vehicles while Nio uses state-owned factories, and it deals with poor charging infrastructure by focusing on hybrid-electric cars using both electric and gas power — like the Toyota Prius and Ford Fusion here. Using this technology also lets Li’s hybrids travel farther without recharging, which could be a big selling point for many potential buyers.

Back in the U.S., Nikola has been drawing quite a lot of attention among investors, partly because of its skillful branding. But some analysts claim the company so far is more sizzle than steak: it was valued as high as $93.99/share in the past year despite not yet even having a factory, and also despite a scandal involving a Nikola prototype. And the lack of any revenue in 2019 seemed to support the “sizzle” argument.

However, a recently announced partnership with GM now seems to have given the start-up more substance. Under this agreement, the auto giant will produce Nikola’s first effort, the tough-looking Badger pickup, by the end of 2022. The Badger, by employing both battery-electric and hydrogen fuel cell power systems, offers an impressive combined range of 600 miles between recharges.

Nikola’s stock price shot up as much as 53% after GM said it would buy 11% of Nikola’s shares and manufacture the Badger, according to CNBC. (Nikola was priced at $20.56 per share on Sept. 30.) As part of the deal, Nikola will use GM’s Ultium battery system and Hydrotec fuel cell system and also give GM a role in manufacturing Nikola’s big trucks, which will use hydrogen as their main or only fuel.

Refueling with hydrogen takes just minutes, versus up to hours for electric battery EVs. This would be a boon for big rigs, where time equals money. However, Nikola would first have to develop a charging infrastructure for these vehicles, which it says it will do. So far, the U.S. has very few hydrogen charging stations, with most clustered in a few locations in California.

In addition, Nikola’s shares dropped as much as 40% after Hindenburg Research published a report accusing the company of filming its Nikola One semi prototype rolling down a hill rather than running under its own power. The report also questioned many of Nikola’s past claims. Nikola tacitly admitted the truck caper but challenged the other allegations and questioned why Hindenburg released the report soon after Nikola announced its agreement with GM. Nikola accused Hindenburg, a short seller, of intentionally trying to profit by driving down Nikola’s stock price.

If you want to try out the EV market via an American icon, then Ford will probably be your choice. Not only is the company itself an icon, but its first two all-electric offerings are both icons in their own right, the Mustang and F-150. Ford rolled out the all-electric Mustang Mach-E last November. And the company is now making a huge play with two new versions of its best-selling F-150 pickup.

The first will be a gas-electric hybrid, on sale at dealers starting this November. The second will be an all-electric version, which is supposed to be available in mid-2022. Ford claims it will be “the most powerful F-150 yet,” with its dual electric motors generating more horsepower, torque, and faster acceleration than any current F-150. In addition, the truck will feature new technology that lets it supply electricity for places like job sites. And because its electric motor will take up far less space than a conventional one, a “giant” front trunk will add cargo capacity plus secure storage space, something lacking in many pickups.

Ford also claims its FordPass Charging Network, with more than 13,500 charging stations across the U.S., is the largest public electric juice network offered by any car manufacturer here. And in contrast to American competitor Tesla, Ford stock is now very low-priced. It checked in at just $6.61 per share as of Sept. 30 and has been climbing fairly steadily from $5/share in April. That of course reflects the whole company, not just its EV operations, which are still a small part of the total. Ford’s revenues in 2019 were $155.9 billion.

And last but not least, if you think making EVs accessible to the masses is the way to go, you’ll want to check out China-based Kandi. Unlike most other manufacturers, it’s focusing on the very affordable EV market. Its lowest-priced model, the K22 two-seater subcompact, looks quite a lot like the SmartCar popular here for a number of years. The K-22 starts at $20,000, costs only about $12,000 with the current federal subsidy, and as little as $10,000 in some states with their additional tax credits. (The company also introduced its five-seat EX-3 SUV here at the same time.)

Kandi cleverly calls this approach “Auto EVolution For All.” The pricing will put new EVs within the reach of millions who previously couldn’t consider them — which could expand the market significantly. Kandi’s stock jumped up to 40% after announcing approval to sell these two models in the U.S. in 2019. 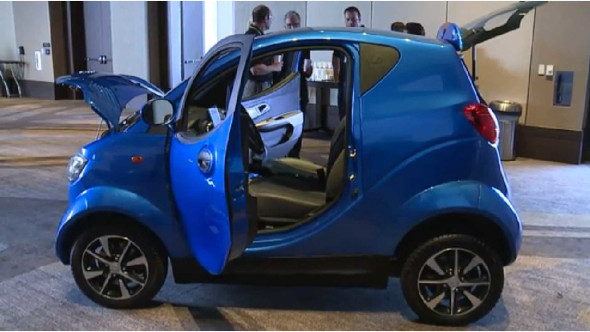 Like some of its Chinese competitors, the company has also created a battery-swapping system.  In addition, Kandi plans “to more aggressively target” the North American market, with its American subsidiary, SC Autosports, getting ready to launch sales of Kandi’s EVs in the region. In addition, Kandi said it’s “actively exploring” possibly opening one or more North American factories for its EVs, which would make them even more affordable here by eliminating shipping costs and tariffs. Kandi’s 2019 revenue was $135.74 million.

A couple of takeaways

First, you should watch the Chinese market closely for other good possible plays to emerge from the many EV firms jockeying to join Nio in the top tier.

And in general, you should look for more chances to invest in EVs in the near future as rapid technological advances, such as in electric batteries and hydrogen fuel cells, make them a more realistic option for more consumers and businesses. And helped by these advances (as well as government actions scaling back fossil fuel vehicles), more and more companies are turning to vehicles powered by renewables as the way of the future.

Happy EV investment hunting, and keep looking to Outsider Club for further research and insights as we cover the EV revolution.