An "escape artist" tells his story...

Last weekend I decided to do some extreme "social-distancing".

I loaded my tent, some canned food, and my shotgun and started driving south. My destination? Thirty acres of forested land that my friends and I bought years ago for just such an occasion.

At the time our families thought we were a bit crazy. "What in the hell are you going to do with an empty property in the middle of nowhere?" they laughed.

When I arrived at the property, my good friend Garrett greeted me at the top of the muddy, tree-strewn "driveway".

"Who's laughing now!" he cackled, as we gave each other pantomimed high-fives from six feet away.

While we couldn't have foreseen the current coronavirus situation, we all knew that something would happen eventually to justify having a compound that we could retreat to if the world went to hell.

For the last few years we've treated it as a "hillbilly hideaway" where we could camp, drive four-wheelers, and check out from the day-to-day monotony of everyday lives. This current situation gave us the added confidence in our purchase and made for a much-needed respite from the home lockdown we've all been living.

We dubbed the weekend "Four Guys and a Chihuahua", which makes more sense in the photo below: 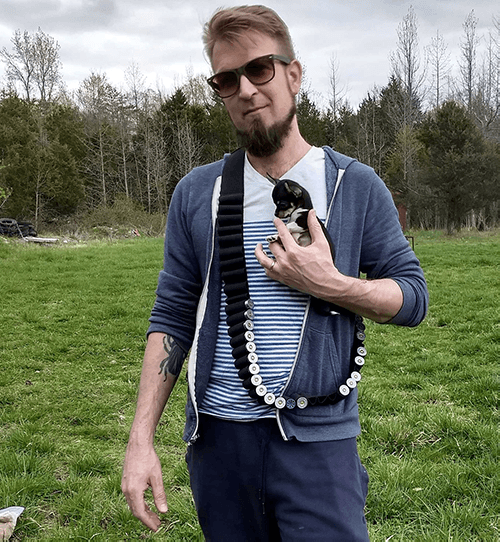 The entire experience reminded me of a conversation I once had with a fellow Outsider Club reader.

He's made a nice living setting people up to weather any disaster, physically and financially...

I had the pleasure of talking to John Haynes, who is an expert on this subject: he founded Retreat Realty, which specializes in survival property.

I gave John a call to gain some wisdom on retreat realty, prepper philosophy, ways to identify a property that works for you and your family, and some unexpected ways the world could suddenly become perilous.

It was a great chat, and I think everyone could learn a few things about hoping for the best while preparing for the worst...

Jimmy: Hi John, thanks for taking the time to speak with me.

Jimmy: So how’s the Retreat Realty business these days?

John: I tell ya, it’s a growing segment of the population demographic. There are a lot of people that really want to have a getaway place, and we’re doing very, very well.

Jimmy: It’s funny, I know this has been a big phenomenon for years — and most people usually think of settling in Montana and states like that...

But here on the East Coast you don’t tend to hear about these properties. Especially being somewhere as potentially volatile as Washington D.C., you’d think more people would have a retreat plan.

John: Agreed. I dealt with a couple from Manhattan whose wake-up call was 9/11. She was there when it happened, so their first step was to move to North Carolina. They’re now looking for a more serious retreat outside of town.

I like to tell people that half of what I do is education and half is real estate.

Jimmy: Now, I’m sure you deal with plenty of the far out there conspiracy folks that fear that everything will collapse at any second. They’ve always been interested in this type of property...

I’m generally not one of those people.

One of the reasons I’ve wanted to talk to you is because I just bought a similar property outside of Washington D.C. mainly for a fun escape — but keeping in mind that if things really do go wrong, I at least have somewhere to go.

Are you getting more interest from people like me?

Perhaps folks that aren’t panicking, but still nervous about what could happen and want a backup plan?

John: Yes, for sure. People are waking up to these possibilities... most of my clients are very educated.

I tell folks when they’re looking at these places, you don’t have to look at it as a end-of-the world property. Find somewhere that suits your family where you can have some fun and enjoy.

If the world does go to pieces, you have a fallback plan...

Half of the people I talk to are just folks that want to live off the grid and be energy independent.

These people are not necessarily preppers, or have a huge fear of government overreach.

I have the most conservative people you can imagine, and also the more far-left environmentalists. So it’s not really a political thing.

Jimmy: You know, I think that both of those sides have much more in common than they may think...

John: They really do. They want to be left alone, enjoy the outdoors, and protect their families. Even the “mother earth types” have a lot of old skills that our grandparents and great-grandparents had that we can all learn from.

We learn from each other, with say gardening and canning, things like that which are really crucial.

We’ve learned how to look at the soil, look at the land and figure out exactly what we need.

Jimmy: So you have Trump supporters and Obama supporters all trying to reach the same goals, and do it together. That’s really encouraging.

John: Yeah, I think that both sides — the preppers and the liberals — have a bit of worry about unrest and uncertainty with what’s going on.

It’s not just the overbearing government. It’s the power grid, the threats to it which aren’t just manmade — terrorists or cyberattacks, but natural phenomenons that could short everything out.

Like the Carrington Event in 1859 — a solar flare that if it happened today could send us back to the dark ages.

I look at the dollar — I have some serious concerns about the dollar as the world’s reserve currency.

It’s not just the political situation — it’s economics too. It doesn’t take much to spook the markets.

Jimmy: I agree — people don’t tend to think about the natural disasters. Most people are worried about the politics or the economy, but there are so many other issues.

Anything could happen, and I doubt 99% of people actually have a plan for these things.

John: Not in the U.S. at least. That’s because we’re not a third-world country — yet.

We haven’t had to live in that kind of distress. I lived in Guyana, South America for three years, and that is a Third-World situation. I watched the way they lived and survived. Until it hits us like that, people won’t be properly prepared.

My in-laws lived in Japan for 46 years. They were in the middle of the Hanshin earthquake in 1995. It hit around 5 in the morning and 5,000 people died. 200,000 homes and buildings were destroyed instantly. They were out of power, water, heat, and phones for a long, long time.

So my mother-in-law kept a get-out bag by the door after that... water, food, clothes, and money.

Jimmy: Which may at least get you through a week or so.

John: Exactly. But nobody here in the states really has that. It goes back to being a good boy scout: be prepared. Have a plan.

Jimmy: At least know how to make a fire, know how to get some food together. We’re obviously losing those basic skills. It seems like nobody knows how to do anything without Google today.

John: We’re so conditioned to it. We’re completely reliant on electricity for every facet of our lives.

Jimmy: So, let’s get back to real estate for a moment. Tell me a bit more about the people coming to you for these types of properties.

John: I speak at events and prepper camps, I sponsor the Carolina Preppers Network, which has around 3,000 members. They all add to the word of mouth for my business.

But most people that come to me have no idea what to do. They just know they want a place that’s out of the way where they can go — maybe tucked away in the mountains.

So, I don’t just have typical prepper properties with vaults and a bunker setup and such. That isn’t as common.

Predominantly I’m a land broker with a prepper philosophy. I look at security: how defensible is it? How exposed is it?

It’s funny, some people will buy a mountain property with a beautiful view, but they’ll come to realize it’s on the North side of the mountain and they don’t get the sun they need. When the dead of winter hits it will get really cold. So I tell them, make sure you know where the sun is going up and down.

How are the wildlife habitats?

Who are your neighbors and how close are they? Do they live here full time? Is it a seasonal home?

Are you living next to a mountain family with Papa Joe and Uncle Jimmy and Cousin Leroy and you’re coming in as an outsider?

Most people think they need 50 acres, and I tell them you may need far less — it’s all dependent on the actual property.

Jimmy: This is fascinating stuff John, thanks for taking the time to speak with me.

John: Been my pleasure Jimmy, thank you.

Here are John’s criteria for finding a survival property:

You can read more from John on his blog.

You can never be too prepared...

Just ask my colleague Nick Hodge, who was way ahead of the curve. He also moved to a remote location that fits the Retreat Realty criteria. He's also set up his portfolio in the same way.

He's been ready for years — I'd urge you to heed his new warning.