I'm going to do something I've never done before. I'm going to ask our readers for a favor.

As major investment banks moved into more traditional banking roles in the wake of the recession, they had to conform to many rules to qualify for the mandated Federal Reserve protection.

One of the most important rules mandated that deposit-taking, federally protected banks could not own non-financial businesses unless the commodity operations were owned prior to Sept. 30, 1997.

In 2008, Morgan Stanley and Goldman Sachs converted from investment banks and got special exemptions from this rule. They had two years to exit commodities and sell non-financial assets.

Five years and three yearlong extensions later, there are a lot of questions federal regulators need to be asked. I'm afraid the Senate subcommittee isn't entirely up to the task.

Here are three questions for the Fed officials and other federal regulators...

In the wake of overwhelming evidence of manipulation, why were unconditional extensions continuously granted for these former investment banks?

Back in July, JPMorgan Chase agreed to hand over a $410 million settlement because of accusations of manipulation by government regulators.

The Federal Energy Regulatory Commission said the bank's subsidiary, J.P. Morgan Ventures Energy Corp., had charged electricity grids in California as much as 80 times the normal prices at certain hours of the day through "manipulative bidding strategies" between September 2010 and June 2011.

These are technically only "accusations" because regulators continuously allow banks to settle without admitting guilt to protect the individuals responsible.

The problems hardly stop there. You'd be hard-pressed to name a single major commodity that isn't manipulated by one of the major megabanks.

Goldman Sachs, through circulating aluminum between warehouses and delaying delivery, inflated the price of the metal. Can manufacturers and others believe the company has extracted $3 billion more as a result.

And it isn't limited to physically supplying commodities...

JPMorgan had amassed $1.5 billion in copper, or more than half of the available amount held in all warehouses registered on exchanges. It then started working on a plan to allow it, Goldman Sachs, and BlackRock to buy over 80% of available copper to create a copper ETF, claiming it wouldn't change the price of copper to remove such a massive amount from the market in one fell swoop.

It is clear from these issues — along with many others that are not related to commodities, such as LIBOR rate manipulation and mortgage CDS creation — that these banks will dominate and game any market they can.

And yet extensions have been continuously granted.

So join Outsider Club today for FREE. You'll learn how to take control of your finances, manage your own investments, and beat "the system" on your own terms. Become a member today, and get our latest free report: "Silver: A Better Bet Than Gold."

Why did you allow these banks to continue exposing commodities to unimaginable risk and contagion when these banks needed massive injections of cash?

As these massive investment banks transitioned into Fed-backed institutions, they were publicly receiving large infusions of cash through the $700 billion Troubled Asset Relief Program.

Yet this only scratches the surface of what really happened. 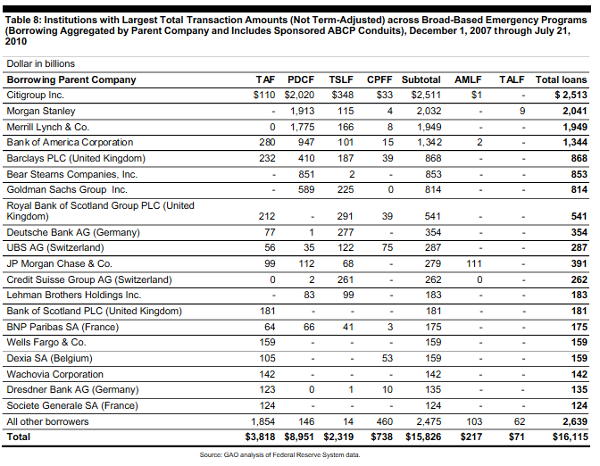 The Fed obviously needs to explain why these institutions, which include many European banks that the Fed shouldn't be helping at all, received loans hidden from the public until a mandatory GAO audit uncovered its actions.

However, this panel is focusing on commodities. In that regard, the Fed needs to explain why it would allow continuous exposure of critically important commodities to these massively risky banks.

The same investment banks that enjoy "Too Big to Fail" status and protection by the Fed dominate speculative paper trading that far outweighs real inventory and production. Will limitations on their activities in commodities include paper trading?

JPMorgan inherited a massive amount of silver shorts priced between $20 and $21 when it took over Bear Stearns. Combined with HSBC, the two megabanks covered 85% of all silver shorts.

A precious metals trader named Andrew Maguire sent detailed information in an email to the CFTC on Feb. 3, 2010 about what to expect in two days after he noticed signals from JPMorgan and HSBC traders using after-hours high-frequency trades to crush silver prices and maintain the value of their short positions.

His description was perfectly accurate. The trader, selling 400 contracts per second, dumped 45,000 contracts into the market. Each was for 5,000 troy ounces for a grand total of 7,000 tonnes. The seller then suddenly shifted and started purchasing everything he could. Still moving far faster than other traders, he or she walked away with $3.6 billion.

Massive volumes of sell orders are placed and canceled in fractions of a second by these high-frequency traders. The lower sell prices still appear in market data for anyone that cannot handle trading by the millisecond, leading to panic selling by other (much slower) traders.

The high-frequency trading system then snaps up the positions for profit. After all, they never sold anything to begin with... they simply maintained short positions and canceled sales to buy at discounts.

In more recent history, JPMorgan has been holding about 25% of the silver short market, with the largest eight commercial silver shorts accounting for 50% to 60%. Estimates put paper silver positions at 143 times the actual amount of physical silver traded.

The paper gold market is similarly outsized compared to actual bullion available in the market, although it isn't dominated by so few large positions.

Considering the role megabanks have had in these markets and the manipulation mentioned earlier, new limits should be placed on bank influence of the paper markets as well as the physical.

Getting back to the beginning of this article, I have a request: If you want answers to these questions too, please send these questions to the Fed and the members of the Senate subcommittee. Both are soliciting public comments.

The Fed should be adding public comments for the Senate meeting here today. Here is a link to the committee members and their websites with contact information.

We deserve answers to these three questions. I fear the panel will gloss over these topics and miss holding the Fed accountable for its actions.

Janet Yellen Could Be Bernanke on Steroids
When Ben Bernanke ascended to the ranks of Federal Reserve Chairman, no one thought he'd end up exploding the Fed's balance sheet by trillions of dollars, making him one the most activist Fed Chief in history. Now, Janet Yellen looks to pick up where Bernanke left off. And she's decidedly left of of her predecessor.
QE Can Only End One Way
The markets and the Fed ended the year on a high-note thanks to QE, but the cost has been too high. Ultimately, we'll all lose because of it.
PEAK CRISIS is Here! (What to do?)
A crisis isn't coming; it's already here. That's the bad news. But the good news is we're starting to see major shifts...
Heal Your Ailing Portfolio Body