The Federal Reserve is up to its old tricks under a new name. Any name really, just definitely not the old name.

It just announced that it is reversing course and buying $60 billion a month of government-backed debt.

But don’t call it quantitative easing! Don’t confuse this with stimulus!

The Fed is adamant that this is completely different. It doth protest too much, methinks.

Here’s what’s going on. The Fed is still worried about the short-term money markets and it just unveiled what it is going to do about it.

It is going to be buying short-term debt and expanding the Fed’s balance sheet, thus boosting the financial system’s bank reserves.

The hope is that this will be enough to stave off a repeat of what happened last month, when the repo market went bonkers and contagion pushed short-term interest rates in money markets to around 10%.

Meanwhile, it’ll keep intervening directly in the market for repo agreements through at least January of next year.

On paper and in a complete vacuum, divorced from the root of the problem, that seems fine.

Two glaring issues are obvious though.

First, the size of these purchases is a shocker to just about everyone, along with the duration.

$60 billion a month of government-backed debt comes pretty close to the $85 billion per month the Fed was buying during the last “official” round of QE.

This may be a softer version of QE, and the Fed may not want to call it QE, but the facts are staring us right in the face.

This is a massive open-ended buying program by any definition you can imagine and the Fed is essentially in a PR branding campaign to hide the reality of it.

As Paul Ashworth, chief economist at Capital Economics, put it, “When it swims like a duck and quacks like a duck, it’s hard to prove your intentions aren’t fowl.”

Second, with how I see it, QE never ended and this confirms that the Fed cannot back out of its extraordinary actions most of the last decade.

Take a look at this chart of total assets on the Fed’s balance sheet — from the Fed itself — and tell me that QE is over: 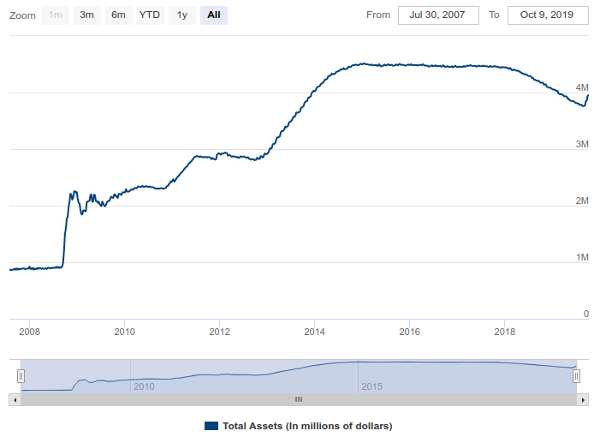 The Fed had barely even begun to reduce its balance sheet before it had to expand it again. QE buying programs may end but QE as a whole will not end until the Fed balance sheet sheds several trillion dollars.

The outcry over ramping up the Fed’s balance sheet to nearly $5 trillion was only partly about the scale of the intervention. From my perspective, the larger issue was always how to unwind and return to some semblance of normalcy and sanity.

None of the issues this addresses would have existed if the Fed wasn’t still neck-deep in one of the most dangerous monetary policies in the history of civilization.

The Fed is hoping the left hand won’t figure out what the right hand is doing and it is trying as hard as it can to convince people not to pay attention to the whole picture.

Don’t let it for your own sake. QE never ended, and we’re entering a new phase that confirms it won’t without a lot of pain or a full-blown correction.

It has never been more important to make sure you're protected from this massive systemic risk, and we should all know how to do it.

The Next Gold Bull Is Here
The writing has been on the wall, it’s just finally starting to be talked about. Make sure you’re positioned. Outsider Club editor Gerardo Del Real explains what investors need to do now...
Mr. Dines On Gold: America's Debt Is Unpayable
Unless governments at the very least begin to balance their budgets, and take seriously that debts require repayments, a soaring gold price appears to be inevitable
Investing in Marijuana Without Getting Burned
The marijuana industry has rewarded scores of investors with life-changing gains.