Food Commodities are Ready to Get Bullish

Something has been very different this summer than in years past.

And it has been a relief to millions of Americans.

If you'll recall, from March through September of 2011 and 2012, you couldn't turn on the TV without seeing a random farmer from the Midwest or Southwest with a microphone...

Camera crews wandered around Middle America, looking for anyone to interview with a backdrop of wilted corn and cracked ground from severe dry heat. 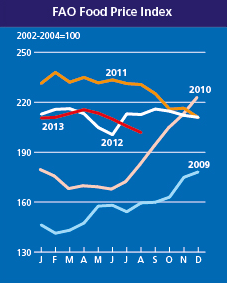 The weather affects consumers in turn. Virtually everything we buy these days contains corn, soy, or both, ranging from high-fructose corn syrup in all the processed food found on grocery store shelves to the livestock that eat them as feed.

According to the Food and Agriculture Organization of the United Nations, prices in August averaged out to just over twice what they were from 2002-2004.

This should help the outflow of money in the U.S. current account balance, considering domestic corn and soy crops pulled in $63.9 billion and $37.4 billion, respectively.

We're talking about big business here — and it brings in a lot of much-needed cash to some hard-hit states.

When it comes to agriculture commodities, there are really only three major factors to consider:

1. How much is being planted;

Arable land is slowly degrading, and the world's population is constantly growing. Add to this the ever-increasing demand for meat in places like China, and pressure on grain supplies worsens.

Meat consumption — three-fourths of which is pork — has quadrupled in the last three decades, pulling in $183 billion in 2012. China imported around 60% of the world's total soybean production to match demand.

As worldwide demand continues to climb, the amount of arable land has been shrinking across the globe. China in particular is facing a dilemma, as it is home to 20% of the world's population and only 7% of its arable land.

At the end of the day, however, it's the weather that truly sets the prices paid for corn, soybeans, and other crops in the short term...

And with what is going on right now in the Midwest, it's time to get bullish.

This year, the weather has been ideal for the growing seasons. Harvests will be much better.

Over the past year, corn and soybean prices have slid down quite a bit after the 2012 summer weather decimated harvests and drove prices through the roof... However, the stable weather of the last several months appears to have bred complacency and driven prices to a point where reduced harvests from a couple weeks of bad weather quickly snapped the price slide.

After a very quiet spring and summer, a bit of bad news roiled the market.

On August 25th, CBOT corn prices jumped 6.5% and soybeans popped up 4.6%. Prior to that, prices had crept up almost 10% for both commodities.

Net short positions, which have dominated the market for two months, were slightly affected — but didn't react appropriately to the price increases. This suggests a definite upside in prices, especially if the weather doesn't cooperate. 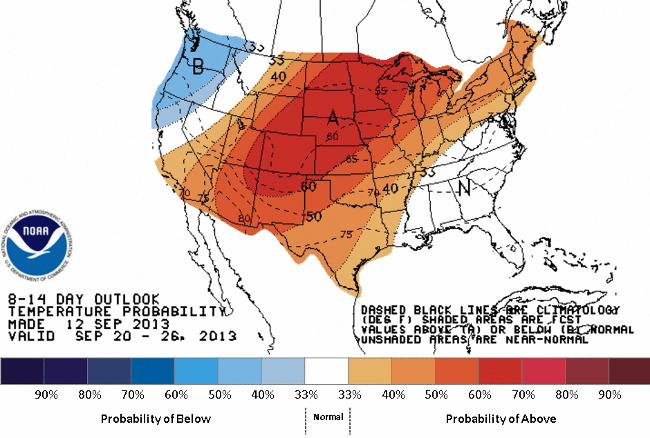 A large swath of land from Arkansas to Oklahoma through Michigan to Wisconsin saw 40%-50% less rain than on average over the next several weeks. This includes the four states mentioned, along with all of Illinois, Iowa, and Nebraska.

Areas of the Midwest had as little as 5% of the normal amount of rain in the last month. 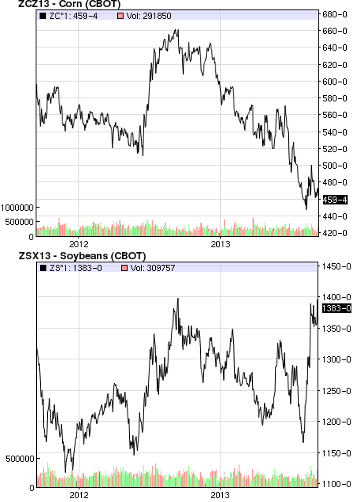 These numbers fall well short of previous estimates from the U.S. Department of Agriculture, which were revised down as well.

The corn crop has slipped back down some after some much needed rain, but soy is still going strong thanks to major yield concerns.

As Richard Feltes, VP of Research at broker RJ O'Brien, told the Financial Times: "Time is running out to stabilize the 2013 U.S. soy yield."

Two different bullish cases are emerging for the crops: On one hand, we have corn at prices we haven't seen since 2010. On the other, we have soy climbing higher — with the potential to keep running due to massive demand and disappointing yields.

The final harvest for the largest crops of corn and soy in the world will be pretty much over within a month. And given the low prices, weather forecasts, and developments, it looks like the 2013 season will end on a sour note for harvests and a good note for bullish investors.

There are a handful of ways to gain exposure. And there's no need to enter the risky futures arena these days...

The Outsider Club's founder Nick Hodge just recommended a great position that rolls both crops into one buy order for his Like Minded People readers.

If you're interested in learning more about his new service, you can find out more about it here.