Printed to Death: Dollar Due to Crash in 2021

Congress is set to give final approval to Biden's $1.9 trillion coronavirus stimulus package today — which amounts to one of the largest bailouts in American history.

Well, the government certainly doesn't have any savings it can dip into. In fact, it only has an insurmountable pile of debt — which now totals over $28 trillion.

So they won't be able to pay for Biden's stimulus with any money they have now.

And they won't be able to get the cash through taxes.

The government generates about $3.5 trillion a year in tax revenue. But that money is already allocated to the general budget. Tax money simply can't pay for this stimulus.

The government could cut $1.9 trillion in spending from the budget and reallocate that money to pay for the stimulus. But there's no way that's happening. That would be political suicide for Biden and a major stain on the Democratic party — ain't happening.

The government needs $1.9 trillion to pay for this thing...

But they don't have it in savings...

They can't raise the money through taxes...

And they aren't going to reallocate any of the money they're spending now to pay for it.

So where are they going to get the money to pay for this bailout?

Well, there's only one option left: Print it.

To get the money the government needs to pay for Biden's stimulus, America must continue on its course of quantitative easing — whereby the federal government creates new debt bonds, which it exchanges with the Federal Reserve for freshly created money.

I think it's important to point out here that this is not a partisan matter. Biden's stimulus package will have to be funded by printing new money. But that's exactly how Trump's stimulus packages (plural) were paid for as well. Quantitative easing isn't a political divide. Both parties are consenting here.

To pay for the COVID bailouts to date, the Federal Reserve has added 25% to the total supply of U.S. dollars.

Please let me repeat that...

In the past 12 months alone, the Federal Reserve has added 25% to the total money supply! 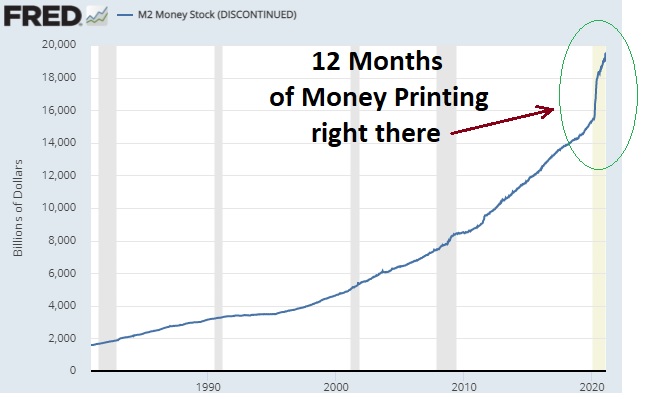 And that doesn't include Biden's new stimulus package.

How much more can the federal government add to the supply of U.S. dollars before the value of the USD collapses? How much to print it into the grave?

But it seems like the federal government wants to find out.

Are they going to say the country needs another stimulus after this one?

Probably. My guess is the House is going to agree that Biden's first package was a good start, buuut there were gaps that could have been filled in... and another stimulus is needed to correct that inequality.

So where will the money printing end?

Well, that's anyone's guess. For sure, though, these massive injections of new U.S. dollars will, sooner or later, come to have devastating effects on the value of the currency.

And when that happens, there will be only one place to turn for wealth preservation: Gold.

Back in 2008, the federal government began experimenting with quantitative easing for bailouts caused by the housing crisis. They did the same thing back then that they're doing today: They printed new money to pay for bailouts.

A few years later, this caused the price of gold to rocket to an all-time high of over $1,900 an ounce.

But compare the amount of money the Fed had to create for that bailout to the amount of cash they just produced in the past year. 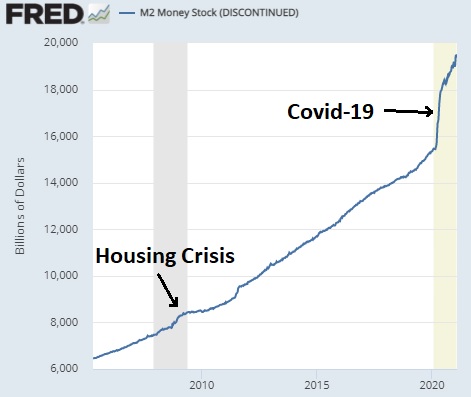 If gold's price shot up to record highs on the fallout from the QE a decade ago, just imagine how much higher it could go today.

It's hard to say.

The government has never added so much to the supply of U.S. dollars in such a short time frame. There's simply no precedent.

One thing is for certain, though: The gold market is locked and loaded — set to experience a once-in-a-lifetime super bull market.

Honestly, the price of gold hardly matters to many of the gold stocks in my Junior Mining Trader portfolio.

Over the past few months, I've been positioning my subscribers in gold companies that will soar in value with rising gold prices — but gold prices don't necessarily need to increase for many of their share prices to rise.

One, for example, is a tiny gold miner that just began production in December. Right now the company is in phase two of its three-phase plan to ramp up to full production. As the company does this and continues to explore its property, its valuation is set to go higher even if gold prices sit flat.

Another company — one that I've been calling the most exciting gold exploration company on the planet — has been finding insanely high grades of gold in drilling on a project they just started exploring back in August.

Gold ore for mining is generally considered high-grade if it contains at least 10 grams per tonne (g/t) of gold. That means there is 10 grams of gold in every metric ton of rock. It doesn't sound like much, but most of the world's gold mines operate at grades averaging 1–4 g/t.

This company just hit a small intersection that graded over 200 g/t!

Like the small mining company I mentioned, this small exploration company is set to go higher even if gold prices sit flat if it keep finding grades like that.

I have recently put together a complete report that gives all the details of this small exploration company. You can access it here.

Gold is positioned to make its biggest moves in history. It's an opportunity you'll not want to miss.

Check out my new report, which could help you make the absolute most of this historic rally.