Last weekend, I went over the buying frenzy going on behind the scenes among gold miners and producers.

Today, I want to expand on why this won't be an isolated event. There is a sustaining reason why this should continue for years to come.

We're all familiar with peak oil. At a certain point the easy-to-get oil will be gone, extraction will get more expensive, and production will steadily decline, never to hit new highs.

The thing is, the same can apply to any finite resource. This is especially true for gold, silver, and other high-value metals that are exceptionally rare.

Peak gold theories have been floating around for some time, but haven't gotten much attention. Now that is changing.

“Known” is the key word. Exploration will continue, and would even increase in pace towards the end at just about any cost.

However, we can take a look at current trends to see where we're heading. The short version is it doesn't look good, or looks great, depending on which side of the equation you're on.

More Out Than In

Since 2013, we've certainly seen good reason for gold miners to shelve development of new projects in favor of cutting costs. The severe drop in precious metals prices put many on a course to insolvency otherwise.

That reversed early this year, with the gold miner hunger games coming to an end through higher prices and balance sheet discipline.

Yet production is not responding accordingly. Some analysts expect global production to fall 3% in 2016 after seven straight years of growth. 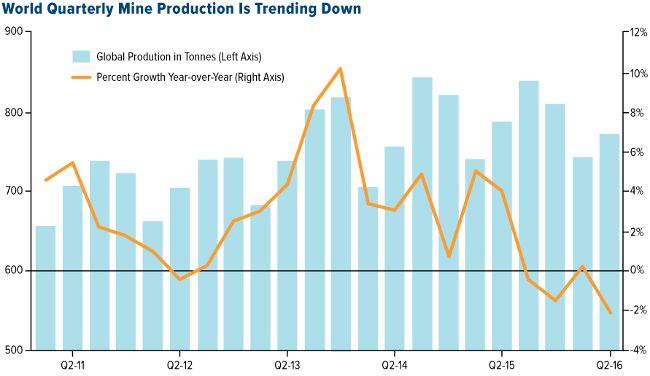 This should be expected. Gold mining is capital and labor intensive, and it takes time to ramp up. On the surface, this suggests we'd see more production next year.

However, when you dig into the data, there is strong evidence that this will not happen.

Step back and look at the broader picture, and you'll see that a squeeze has been in the works for quite some time.

Over the same period the industry has produced 1.84 billion ounces of gold. Discoveries have not been keeping pace with production.

Significant discoveries are diminishing and the trend is accelerating. 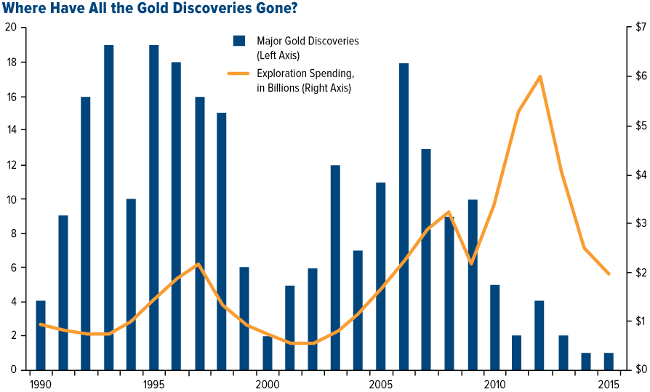 SNL Metals and Mining noted a fact that only makes this worse: “Considering that only a third of the discovered gold has been upgraded to reserves or has already been produced, and that many of these deposits face significant political, environmental or economic hurdles, the amount of gold becoming available for production in the near term is certainly much less.”

The case for peak gold is further reinforced by the amount of time needed to develop discoveries into producing mines. 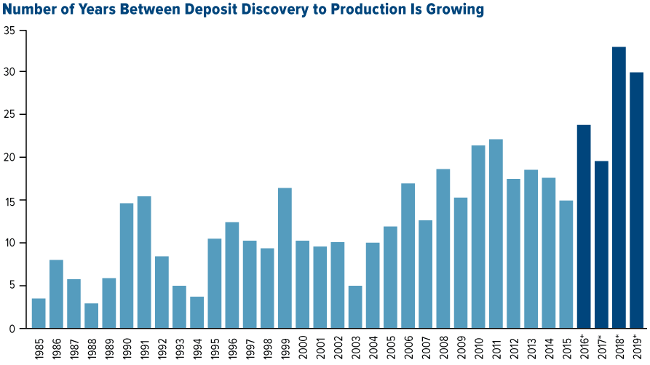 This comes with a whole slew of issues. Investments in properties take far longer to pay off. Meanwhile, interest payments on debt build up, payroll and company overhead costs whittle away at capital, and so on.

The Winners and the Losers

All of this is bad news for any industrial users of gold for sure. If this situation doesn't reverse, higher prices and stiffer competition to secure long-term supply deals are all but guaranteed.

It will also mean higher prices for major gold miners that acquire projects close to production, and stiffer competition resulting in bigger premiums paid to shareholders of acquisition targets.

As mentioned on Saturday, major gold miners are already paying higher prices for quality projects. The average paid in 133 transactions in the three months to June was $64 an ounce of gold equivalent in the ground, up from $36 in the first quarter.

For junior miners, it will mean a significant differentiation between the best and the worst, with a rising tide eventually lifting all boats if the trend persists.

Small and mid-sized producers will be swept up in a flurry of deals. Once the good ones have been secured, the majors will have to pick over the rest for anything of value. This is already happening as a result of higher gold prices now.

If the major miners, who undoubtedly are watching this trend evolve, decide to secure whatever reserves they can reasonably finance, and if gold prices don't crater, today's elevated M&A activity could very well carry through into the long-term outlook without any dip.

Regardless of whether or not we are truly seeing peak gold, or just a peak in gold for the next several years, one thing is for sure.

High quality junior miners nearing production will continue to generate hefty returns for investors for years to come at the expense of the majors who will increasingly need what they've got.