Party in the Bear Den

Investing over the past five years has been akin to finding yourself in one of those money booths from a cheesy 1970s game show...

You remember the gag. A giggling idiot is awarded a set amount of time in a phone booth filled with cash. Once inside, the game show host flips on the fan and the cash starts swirling around inside the booth as the timer ticks down. Finally, the talk show host stops the fan — and the contestant can walk with whatever money they were holding when the buzzer went off.

Only in this scenario, Ben Bernanke is the talk show host, and we're the giggling contestants.

Now, if you started grabbing the loot when the Fed began qualitative easing, you will have grabbed an astonishing 104% just investing in the S&P Index... 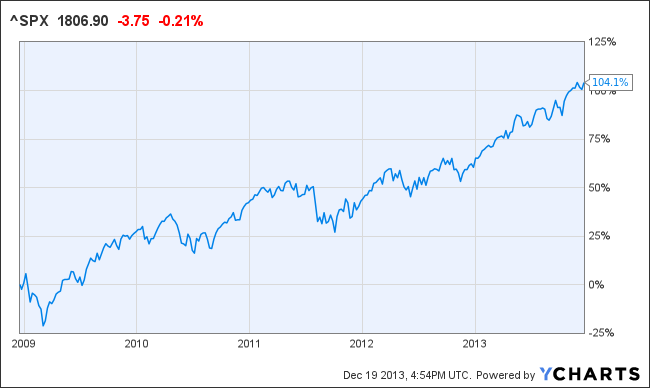 And the Dow Index would have returned you 83.5%. 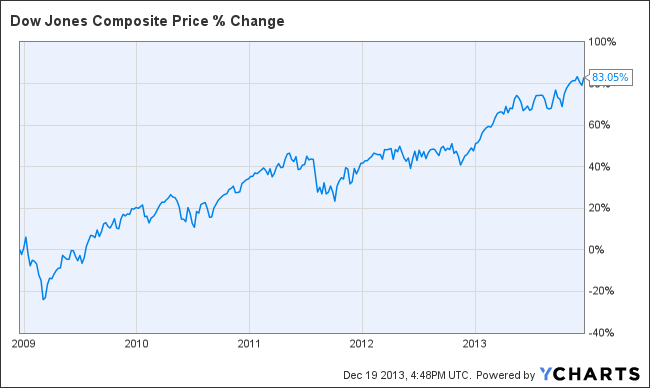 The only problem is this isn't a game show.

When the Fed eventually decides when to flip the switch on the cash machine, you don't get to keep everything you've grabbed. When time is up in the Fed's money booth, the bills you're holding get sucked right back into the machine... and you're left holding a whole lot of nothing.

The key is to know when to jump out of the booth altogether. But if you think the game is already over, you are leaving a lot of money in the booth...

If you're like us, you're a skeptic by nature.

You probably wince and shake your fist every time this Fed-drunk market hits each new high.

But if you've been a bear this entire time, you've gotten crushed. It just goes to show that you can't fight the Fed.

Judging by the market's reaction to the Fed's tapering (it jumped to yet another record high), we still won't have to worry about a crash for a while.

"We didn’t get a pure tapering, we got two messages: One is they’re going to begin tapering in modest amounts, and the other was that they’ve made it very clear that they’re not going to raise interest rates for a very long time," Jim Rickards of Tangent Capital recently told Daily Ticker.

"What the Fed is saying is 'Don't worry, we've got your back, you can borrow money for as long as you want,' and that’s what the stock market wanted." 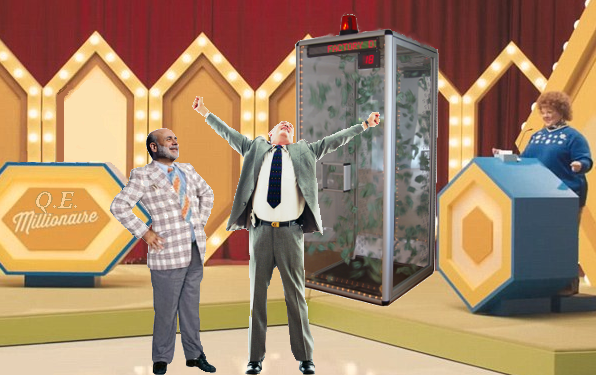 Plenty of profits are still to be snatched up in the meantime.

Even some of the biggest old bears can't help but agree...

Take "Dr. Doom" Marc Faber for instance. Even he thinks the market still has room to run:

They may go up another 10%, maybe even 20%, but the risks have increased significantly and I don’t think equity investors in the US, aside from a short-term trading opportunity, will reap very high returns in the future.

That's the most optimistic you'll see Faber. Just last year, his best recommendation was to buy a machine gun... and a tank!

He's not the only reluctant bull in the bear's den. Jeremy Grantham, the co-founder and Chief Investment Strategist of GMO, has long been saying stocks may be overvalued; and he doesn't see a long-term growth anywhere near what it is now.

Grantham actually expects the U.S. market to deliver negative real returns over the next seven years.

However, in his quarterly letter, Grantham spelled out why there is still some upside to this overbought market:

My personal guess is that the U.S. market, especially the non-blue chips, will work its way higher, perhaps by 20% to 30% in the next year or, more likely, two years, with the rest of the world including emerging market equities covering even more ground in at least a partial catch-up.

Now, 30% is nothing to sneeze at. But that's not even the boldest prediction of the bunch...

He is calling for an “explosion” in the market that would catapult it high enough to make the biggest bull blush.

Here are a few highlights from his King World News interview:

I continue to think that this bull market will end in an upside explosion. I believe it is fated to go higher than anybody now believes. A wise move here might be buy the farthest out calls as possible on the thesis that the sellers are convinced they will never be hit. Wise heads are now warning that this market has now passed all sane appraisals, and as such it is highly dangerous. Nevertheless I believe that this market is fated to go higher than even the most bullish practitioners can conceive.

Reading my favorite advisories, they are overwhelmingly bearish, from the standpoint of the usual technicals, including the margin accounts, and the number of bullish advisories vs. the thin bears. All this aside, my instinct tells me that the stock market is heading into the clouds... I sense that the retail public is moving toward an extreme of bullishness, and that all negative indications will be swept aside. This bull market will not end with the usual and obvious technical indications. It will end with an extreme of bullishness from the crowd.

Russell has been writing newsletters since 1958, and he has never skipped a letter. Suffice to say he's seen this movie before.

The lesson here is that if you want to bolster your investments before things fall apart, stay in the cash booth a little longer.

A word of caution: As always, the insiders are the only ones who know when the machine gets turned off.

As Jeremy Grantham said in his letter, “These insiders have far more knowledge than the lambs — formerly known as 'clients' — and without adequate regulations, the lambs are deﬂeeced.”

That's why I've spent weeks poring through stacks of Wall Street documents to find what the big players are buying, to ensure they haven't already sold off their positions...

I've also been hedging the future with precious metals while they're still hated and cheap. When the time comes, they will be my insurance after I sell off my equities for the last round of gains.

We will get through this... and we'll prosper on the way out.