"Bitcoin is soaring again. Are cryptos back? Any plans on covering them?"

According to a report from Reuters this week:

“Several of the world’s largest banks are in the process of investing around $50 million to create a digital cash system using blockchain technology to settle financial transactions.”

Pretty much the biggest banks in the world.

This is huge news... It tells me the big players are getting into cryptocurrencies in a big way.

And once the big banks get behind crypto, there will be no stopping the shift.

Then there’s the Bakkt Exchange, which is owned by the Intercontinental Exchange (ICE), which of course owns the NYSE. It launched a Bitcoin futures market in January...

Nasdaq is teaming up with Van Eck to launch Bitcoin futures this year.

Soon enough, the SEC will approve the first Bitcoin ETF (and then lots of Crypto-ETFs).

Point is, the biggest players on the planet are jumping in right now.

It's here to stay, and it looks like we're in for another run.

Well they're certainly back in the news, and the reinflating prices for the major ones are proof that investor interest is returning.

It is tough to read. What truly drove prices through the roof were liquidity issues. Namely, there was a lot of undisciplined buying interest and nowhere near enough sellers. That makes it really strange to evaluate on short time scales.

I do think we're seeing another rebuilding phase starting up, though.

It is very hard to see in a normal chart because the last price swing completely blew out a normal scale, but Bitcoin has been through the process of finding support and ramping up like this several times before.

Check out a Bitcoin chart with a logarithmic scale from www.tradingview.com: 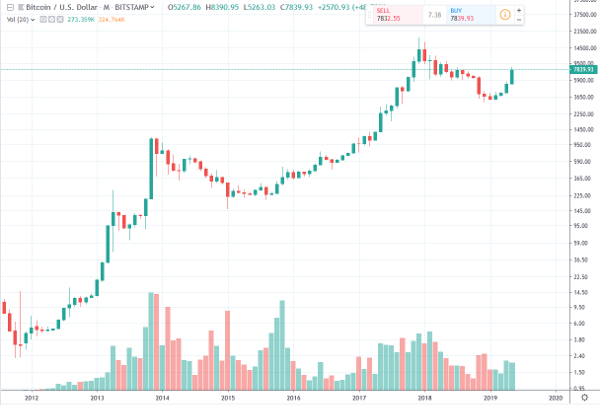 I've seen some talk that something like 60% of all Bitcoin hasn't moved in at least a year. That means we may see a similar liquidity crunch and price movement, but "past results..." yadda yadda yadda.

However, Bitcoin now accounts for around 60% of all value held in cryptocurrencies. That is a major development considering it was virtually 100% up until several years ago. In particular, Ethereum and XRP seem to be getting a lot of attention in terms of investment and headlines.

Maybe with investors a bit more spread out we are finally moving past some of the choppier price swings.

We certainly plan to keep covering cryptocurrencies going forward. We used to have more coverage, but the whole scene kind of dried up and went dormant outside of very technical or obscure developments.

Quite frankly, they're too unique and fascinating to avoid covering for long.

Keep an eye out for more from us. It's certainly in the works.

To learn more about our editors, visit our website. And keep an eye on your inbox for Gerardo's (Mondays), Adam's (Tuesdays), Nick's (Wednesdays), Jimmy's (Thursdays), and Jason's (Fridays) weekly articles.