One Man's Trash is Another Man's Treasure

The Good Kind of Trashy Investing

Asia's richest man leads a consortium into a $1.26 billion acquisition after dropping $501 million on another deal in the same sector.

And although it was largely ignored in financial news, if you take a closer look, you'll see a savvy move in today's increasingly questionable and unstable global economy...

Li Ka-shing is a Hong Kong business magnate and prolific investor worth about $31 billion. In many ways, he is like a Southeast Asian Warren Buffett.

Ka-shing is the head of the Cheung Kong Group and Hutchison Whampoa Limited, which have a combined market capitalization of $162 billion.

You can't turn around in Hong Kong without seeing something he built, owns, or financed. His companies span the globe and control 13% of worldwide container port capacity.

So, what is he pouring money into now?

One of the safest bets in a world facing unprecedented economic uncertainty...

Burn It or Let It Rot

Both companies bring strong management teams and expertise in the sector under control of the consortium led by Ka-shing's company.

With waste-to-energy, there are two common ways to get results.

First, you can indiscriminately burn everything in high-pressure, high-temperature incinerators. This method has been used for a long time: burn it, use a closed-circuit steam turbine system, and filter the pollution from emissions. Simple — however, not as efficient as newer methods...

The second way to get results is to derive chemicals from the trash — in particular, the biomass and organic material used as feedstock. Newer techniques derive hydrogen, synthetic fuels, fertilizers, ethanol and industrial chemicals. Anaerobic digestion, composting, and fermentation are commonly used. (I'm sure you can imagine what it smells like while the waste is processed.)

Either way, any company that can keep down operating costs can pull in a profit by being paid three times: first comes the trash pickup fee; next is the landfill or processing plant fee; and once the company is done processing it, it gets paid for the fuels, fertilizers, and/or chemicals it produces.

The Good Kind of Dirty Money

When I think of making money from garbage, I think of the mafia running New York's teamsters from the 1950s into the 90s...

Without fixing prices and strong-arming competition, there doesn't seem to be much potential to rake in cash. Processing facilities and incinerators are not cheap. Local ordinances and NIMBY neighbors make it a headache as well.

But Ka-shing's rationale for the nearly $2 billion in acquisitions is ironclad. Just like the previous acquisitions that built his business empire, there is a lot of room for growth and future profits. And he is basically guaranteed a return in line with economic activity on near- and long-term scales.

If and when the global economy heats up, consumption increases, as does the amount to burn and/or process — and revenue from AVR and Envirowaste's existing facilities as a result. And long term, population will increase, especially in Southeast Asia. People inevitably will create more and more trash.

In other words, growth is guaranteed.

Growth of new facilities in Europe will decline, but much of that is due to a fully saturated market. Sweden, Norway, the Netherlands, and Germany are currently importing trash from other nations to burn.

It has gotten to the point where trash is now trading as a commodity. AVR was a wise purchase, considering it had direct access to the port in Rotterdam. Landfill costs are constantly increasing in England and other nations, creating an arbitrage situation for trash companies to save money by shipping trash out of the UK instead of to domestic landfills.

Southern Europe produces far more trash per capita, creating another opportunity for a steady feedstock. Waste from Naples, which produces more trash per square meter than any other place in the world, is already paying to send hundreds of thousands of tons of trash to AVR and other waste-to-energy facilities in Germany.

With the purchased companies set to profit and grow, the next move is to bring it all back home to Hong Kong.

Reports show Hong Kong's landfills will be overflowing next year. The city already exports a good deal of recyclable waste. Now it is planning on $4 billion worth of infrastructure spending on landfill expansion, food waste facilities, and incinerators — precisely what Mr. Ka-shing just purchased and exactly what his new employees know how to build and operate is in high demand!

It won't just be a domestic play, though... 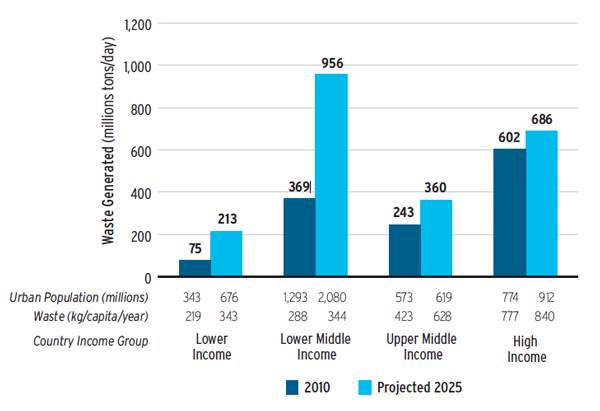 It'll cost about $205 billion to manage municipal waste worldwide this year. By 2025, that cost is expected to increase to more than $375 billion.

Globally, 2013 will see waste-to-energy grow to a $7.5 billion sector. Even if a constant percentage of municipal waste goes to waste-to-energy, within 12 years it will grow 82% overall, good for a 6.8% annualized rate.

With all the factors at hand, an estimated growth figure based on a static percentage will easily be exceeded as more waste is converted into something useful.

With the Dow and S&P 500 convulsing like junkies at the hint of the Fed tapering off cash injections more than a year from now, credit squeezes in Chinese banks causing a 5% correction in the Shanghai exchange, and turmoil in Japan... now is the time to follow Ka-shing's lead and position yourself for long-term trends.

The markets may calm some over the summer, but there is plenty of pain and fear to come before interventions stop and markets become self-sustainable.

Outside of very specific plays, there is no tide to raise all ships.

If you don't have the discipline and time for it, DIY investing in this volatile, dropping market is going to leave you ripping your hair out, losing your shirt, or both.

Playing the long game made Li Ka-shing a profoundly rich man. He has spent a good amount of money on cellular companies and Internet companies, but the bulk of his moves have been in "tried and true" businesses.

Even if you don't have tens of billions to dump on a surefire growth play, the fundamentals are exactly the same.