No, Uganda Did Not Find $12 Trillion Worth of Gold

About a month ago, Reuters reported on an astronomical gold discovery made in Uganda that some have estimated to be worth more than $12 trillion.

The media outlet wrote that a spokesperson from Uganda’s Ministry of Energy and Mineral Development told it that recent exploration had revealed the discovery of 31 million tonnes of gold ore from which 320,158 tonnes of refined gold could be mined.

But anyone who’s spent even a little time researching the gold market will be immediately suspicious of this estimate.

First off, 320,158 tonnes is more than all the world’s known underground gold reserves plus every single ounce of gold that has ever been mined.

According to a 2022 estimate from the World Gold Council, about 205,238 tonnes of gold have been mined throughout history, and there are currently about 53,000 tonnes of gold in total identified underground reserves. 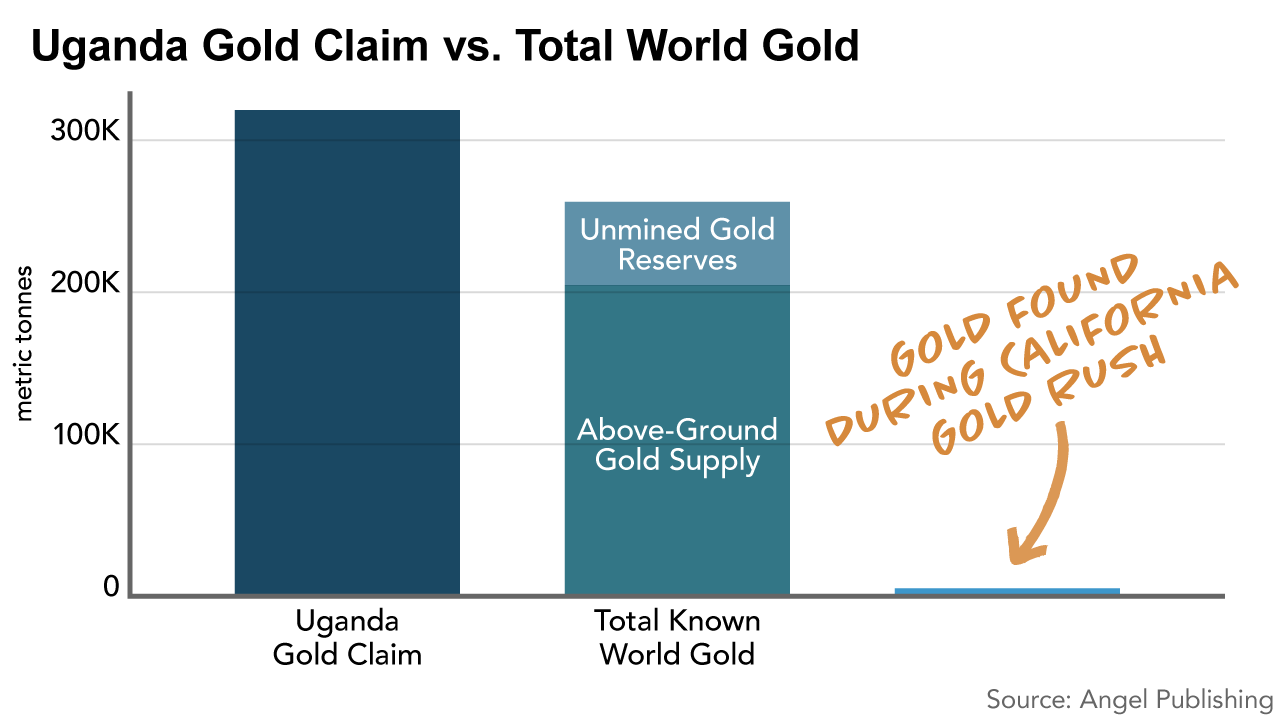 It’s insanely unlikely that Uganda just discovered more gold in its backyard than has ever been discovered in world history. If such rich gold deposits existed, they would have been discovered and mined long ago.

But it’s not just the amount of gold reported that’s suspicious.

The Reuters article says that the 320,158 tonnes of gold could be extracted from 31 million tonnes of ore. What that means is the average gold grade of this ore would be more than 10,000 grams per tonne (g/t).

And that’s just… no. Uganda does not have 31 million tonnes of ore with an average gold grade over 10,000 g/t.

The highest-grade commercial gold mine in the world today is Agnico Eagle’s Fosterville mine in Australia.

Prior to COVID, the Fosterville mine operated with an average head grade of about 40 g/t gold. Since then, mining grades have dropped. During the first quarter of 2022, the average head grade at Fosterville was about 28 g/t. But it remains the world’s highest-grade (and one of the richest) commercial mines in history.

The second-highest-grade commercial gold mine in the world also belongs to Agnico Eagle. During the first quarter of 2022, the company’s Macassa mine had an average head grade of almost 17 g/t.

So the absolute highest-grade gold mine in the world right now is operating with an average head grade of under 30 g/t. And the Ugandan government is saying its country has a massive ore resource with an average grade over 10,000 g/t.

Making a graph to compare these grades is laughable. I’m not even going to waste my time finishing it… 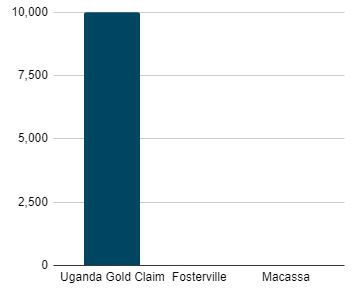 Thirty-one-million tonnes of ore with an average gold grade over 10,000 g/t… no. At that grade, there would be visible gold absolutely everywhere. Gold would be spilling out of the rock. You wouldn’t be able to walk without stepping on gold.

What’s more, the Reuters article reports this incredible gold find was made after aerial exploration followed up by geophysical and geochemical surveys and analyses. And that’s just not how it works, folks.

Geophysical and geochemical tests are part of the very beginning stages of mineral exploration. They prove absolutely nothing. Gold explorers (and others) use geophysical and geochemical tests to identify general areas to test for more focused exploration — they’re reconnaissance for future drilling that might eventually lead to an officially recognized and economically viable gold reserve.

So what the heck is going on here?

Well, it’s possible the Reuters article or Uganda's Ministry of Energy and Mineral Development is mistaking 320,158 tonnes for 320,158 ounces...

It’s also possible the estimate is an extreme exaggeration or simply a flat-out lie. The Ugandan government isn’t exactly known for its highly ethical practices. And the very first sentence of the Reuters article says Uganda “wants to attract big investors to develop the sector hitherto dominated by small wildcat miners.” So it’s more than possible it’s an extreme exaggeration or intentional mistake to attract investors.

So why are people still talking about it?

Well, I do think I have a good answer for that: Bitcoin bros. 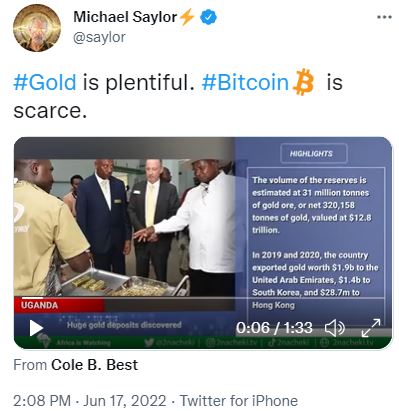 As of July 12, this tweet has received almost 10,000 likes and over 1,700 retweets. And there has been an endless supply of copycat tweets since:

At this point, I’d say the whole thing has almost become a meme. It’s a tongue-in-cheek message meant to provoke opposition and embolden supporters. But for the gold market, it’s most likely a nonevent.

Media outlets like Reuters want to report facts. And the fact is that a spokesperson from Uganda's Ministry of Energy and Mineral Development claims the country holds more than 320,000 tonnes of mineable gold.

But in this case, simply reporting the facts clearly isn’t enough. And, of course, the Bitcoin bros only want to pump their crypto or just play grab-ass.

Neither is a really reliable source for information even though Reuters is reporting facts.

And it’s for both of those reasons (and more) that Outsider Club exists.

We’re here to provide you with investment ideas “outside” of the mainstream, like cannabis was 10 years ago or electric vehicles were a few years before that — and, yes, even Bitcoin. If you had bought one Bitcoin when this Outsider Club article was published, it would be worth about $20,000 today.

But we’re also here to help you weed through the BS. Because as it’s clear from the Reuters article, the surface facts aren’t always enough. I can tell you a bunch of facts about gold:

They all make pretty good headlines.

But none of them mean anything to the gold market or to gold investors. Because even if these resources do exist, they’re either too expensive or impossible to mine.

My point is the editors at the Outsider Club (and I know because I’m one of them) want to give you more than just some retweetable headline. And with the state of the economy, we think that providing our readers with greater analysis is more important than ever.

So stick with us. Let us help guide you through these troubling and confusing times, and together we will endure and prosper.