I remember the first time I met Montel Williams…

Yes, THE Montel Williams, made famous during the 1990s talk show boom. He wasn’t Oprah, and he sure as hell wasn’t Geraldo Rivera, but he split the difference between the “hand to hold, give me tissues” and the hard-hitting “we need to explore this topic” host.

I liked him immediately. In our conversations, Montel just brought it, with vigor...

I’ll go out on a limb to say he was the best daytime talk show host of our generation. You felt something that was real. You felt that he had skin in the game. You just felt something, like he was listening to you, the viewer.

When I met him in person, that was exactly what I felt. Honesty and kinship. There were no cameras, there was no studio audience, and there was no preening celebrity aura. He was just Montel, and he taught me a lot about life, about disease, and about the ways that modern medicine has forgotten where it started. 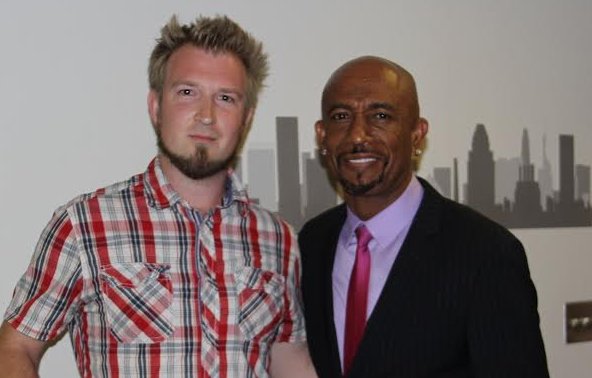 He came to my office on a crisp spring morning in 2014 and I couldn’t help but be rather starstruck. While I didn’t spend most of my childhood watching TV, I sometimes had sick days where I was stuck at home and my parents had to do work. The television was a convenient babysitter and I distinctly remember watching “The Price is Right” and "The Montel Williams Show."

But in a professional setting, I set my childhood ogling aside and set about on the one topic I wanted his opinion on: medical marijuana.

At the time, I’d been hip to the medical marijuana scene for a while. I just hadn’t experienced the heaviness of someone with a serious disease who had actually used cannabis to treat it. Montel was full on medical cannabis before it was “cool.”

He was diagnosed with Multiple sclerosis — which was shocking when I met him, because he seemed completely capable — and had used medical marijuana to treat his symptoms.

And he almost lost his job over it…

I had the privilege to check back in on Montel for the Cannabis Science Conference, right here in Baltimore — hometown to both of us.

Now, before you write Montel off as a simple talk show host, allow me to give you his bona-fides...

He’s a Marine, and achieved the rank of corporal in less than two and a half years. He was actually the first African American Marine selected to the Naval Academy Prep School to go on to graduate from the United States Naval Academy — and then be commissioned as a Naval officer.

Montel earned a degree in general engineering and a minor in internal security affairs from the National Academy, with a degree in Russian from the Defense Language Institute.

After 22 years of service to this country, he was the recipient of multiple Service Medals: one Meritorious Award, two Naval Commendation Medals, two Naval Achievement Medals, and various other military awards.

He currently serves on the Board of Directors for the Fisher Health Foundation and the Ann Romney Center for Neurological Diseases.

He’s the real deal and he credits cannabis for practically saving his life. Here is what he told us at the Cannabis Science Conference...

"I want you to understand that I want you awake because I'm probably going to tick some people off in this room. And guess what? I don't care. I really don't. As a matter of fact, I hope some of you I make real angry. I really do, because right now this industry needs a wake up call, a real fast wake up call.

We seem to have forgotten is that this entire industry was built on the backs of a lot of people that are sitting in this room. Some of them in this room are really patients. We've got to stop and remember, long before this was vogue, long before this became the "green rush" and everybody figured out that they can make big bucks, back at a time when just the fact that I even made a statement about the fact that I use cannabis almost threw me off the air.

I'm talking about 1999, where people were being dragged out of their homes in Oregon and in California on gurneys with IVs in their bodies and being arrested and put in jail for 10 to 20 years just because they were trying to medicate themselves or a family member to live a normal life.

Because people are starting to get sick of the fact that we know what the pharmaceutical industry was doing to us for the last 50 years is going to continue to do to us.

We've got a whole bunch of Ph.D.s, doctors, sitting in this room right here that five years ago would have looked a person in the face and said you're lying when you say something about cannabis. You know you would have done it.

Now all the sudden, you think you have an opportunity to make some money, so you're hanging your Ph.D. and your doctorates certificate on a sign outside the door, "I support cannabis," and backing up all the pharmaceutical companies who for the last 70 years have stated unequivocally, "Marijuana doesn't work."

Seventy years, and now all the sudden in the last, oh, nine months, we've given out six patents to big pharma. And recognize very quickly that all of you mom and pops about to go by the wayside. And the same liars who knew they were lying will be the ones that are going to benefit from this 'green rush.'"

The doctors in the crowd were visibly uncomfortable...

"At the time, my pain in my feet was so bad over the last 20 years that — if you could imagine — someone taking a hot poker right out of the fire and shoving it up in your heel and sticking that, twist it around a little bit, and pull it out. That went on in my life 24 hours a day for almost 17 years.

The first three years, I was being seen by some of the top doctors in this country. One doctor who was considered the world expert on MS.

I saw him and his sidekick doctor who was also one of the best MS doctors in this country who immediately prescribed for me what? Opioids.

And let's get this straight. This is back before science even decided they could rape people as hard as they did when they created this thing called Oxycodone...

Some of the doctors will remember. Doctors in the room: I'll watch you to shake your head. The drug was called Thioguanine. I was taking five of those sometimes a day. I was taking anywhere from six to 10 Vicodin a day, trying to see if I could slow down the pain in my feet just to work.

The wind could blow, and I could cry. I'd see a puppy, I could cry just because I couldn't hold back the pain I had. And long before it became vogue to talk about opioid addiction, I started realizing there is zero reason for me drooling in a corner other than the fact that I had just taken six of those pills I got.

I am honored to say that one of those top doctors looked me in the face and said, "I'm done with you, dude. I'm not writing you anymore scripts. I know what you're doing."

Because as a celebrity, I get to doctor shop. So I could get every doctor friend that I admitted to write me at least one or two prescriptions for something. So I had enough opioids to fill this room for anybody who would want them. And the one doctor said to me, "I'm done with you. I'm not writing them anymore. I know what you're doing. I know you're shopping. I've reached out to several doctors that have written you scripts, and they will not write you anymore. But I'm going to tell something, Montel, I heard about this stuff called marijuana.

I don't know how it works. I will never say that I recommended it to you."

"I will never say I recommended it to you, but I think what you need to do is you need to figure it out. Go figure out how it works, and I bet you, you'll get some relief."

"So from that day on, I started reintroducing cannabinoids back into this brain, and I believe that's part of the reason why I'm standing here before you today. I gave my body more thorough protection using that product. I can tell you there's not a day that's gone by over the course of the last, now almost 18 years, when I have not put a cannabis product into my body, period.

So, thank you to you for wanting to be a part of the real movement to help people. The money's going to come. You reach out to somebody yourself and do for others as much as you do for you. I guarantee you'll be remunerated. That's not even a question."

Montel received a standing ovation. He also had a line of people stretching out the length of the conference hall waiting to shake his steady hand and ask him about medical cannabis.