Meet the Most Powerful Woman in the World

Obama has pushed Ben Bernanke out of his infamous helicopter...

The president just made a surprising claim that Bernanke has "already stayed a lot longer than he wanted or he was supposed to."

Upon hearing the announcement, one Fed governor said Obama basically fired Bernanke on the spot.

It just adds to the evidence that the Fed Chairman will be replaced sooner rather than later.

When the Fed holds its notorious annual meeting in Jackson Hole, Wyoming, Bernanke won't be there to hold court. He has decided not to attend perhaps the most important economic meeting of the year, one at which he's given the keynote speech each and every year since he took his post as Fed Chairman in 2006.

The fact that he won't be appearing may finally signal the end of the Bernanke era. It could also signal a changing of the guards...

Bernanke has asked someone else to deliver the speech, which serves as a massive driver of economic policy around the globe.

So, who is this woman who could step into arguably the most powerful position in the world?

Fed Vice Chair Janet Yellen will give the mighty policy speech this year, lending credence to the rumors that she'll take over the printing presses when Big Ben rides off into the sunset (or to a cushy university job).

A recent survey of economists overwhelmingly selected Yellen as the likely candidate to take over at the Fed. She would be the first female to do so — or to chair any major central bank, for that matter. 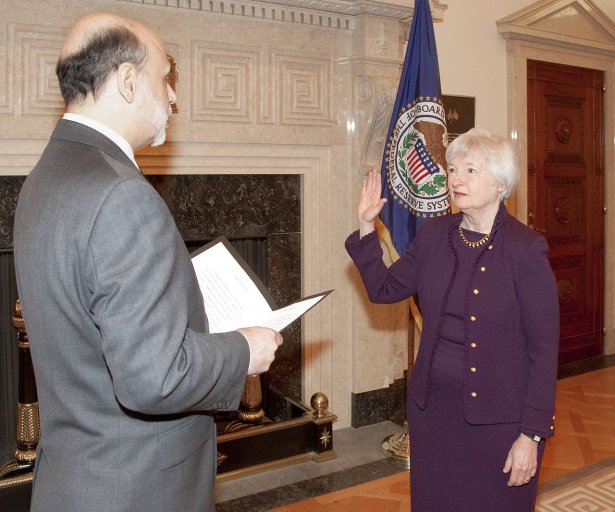 Yellen has spent most of her professional life amongst ivory tower intellectuals, traveling in and out of the revolving door of academia and the Fed:

In 2004, Yellen was named President and CEO of the Federal reserve bank of San Francisco, a position she kept until 2011. She now holds the title of Federal Reserve Vice chairwoman, serving as Bernanke's second in command.

One thing that seems to crop up in any discussion of Yellen is her tolerance — even desire —  for some degree of inflation. She's well-known as the biggest dove in the Fed's ranks, valuing unemployment numbers over inflation fears.

The American Enterprise Institute's Kevin Hassett, who was on staff at the Fed when Yellen was a governor there, warns that having a "dove" in the Fed chair could be disastrous for inflation: "I think that there are folks that have a genuine concern that unless you have a real inflation hawk at the fed, inflation could spin out of control as it did say in the 70s," he told the New York Times.

A hawk she is not.

Yellen has even hinted that she would tolerate above-average inflation until unemployment hits the Fed-targeted 6.5%. She told a group of business writers, "Progress on reducing unemployment should take center stage for the FOMC, even if maintaining that progress might result in inflation..."

With inflation at the lowest level since the 1960s, she may have the political support needed to continue the Fed's bond buying until she hits that magic number, and maybe even beyond that. That makes many of her hawkish contemporaries uncomfortable...

"I am worried that the approach that she and many others favor does over time allow the Fed's anti-inflation credibility to erode," Alfred Broaddus, a former president of the Federal Reserve Bank of Richmond, told the Wall Street Journal.

As far as political support goes, the rumors are Yellen would be a popular choice for the president. Hassett noted that "if the Obama administration is going to pick a Fed chair that thinks the way they do, then Janet Yellen would be the best possible choice."

If you aren't the least bit scared that inflation will eat away at your purchasing power, then have no fear of Yellen taking the helm. If you are comfortable with what Obamanomics has done to the economy, you can continue to sleep well at night.

But if you —  like us — are skeptical that the economy can stand on its own feet after getting drunk on the Fed's spiked punch for the last few years, well, you may have cause for concern...

With a combination of total faith of government intervention in the markets and an appetite for inflation, Yellen is forging a dangerous path. If she keeps that punch bowl filled for too long, she may just get the inflation she desires.

We think she should be careful what she wishes for...

In the meantime, we'll be watching everything "the most powerful woman in the world" is doing leading up to her prime-time debut at the Jackson Hole meeting.