Marijuana: Bigger than the NFL

Eugene Monroe may not be a household name...

While he is a millionaire, three-time Pro-Bowl football player, he isn't exactly well known.

But here in Baltimore, he is known as one of the guys who keeps our $20 million-a-year quarterback, Joe Flacco, from being murdered by defensive ends. 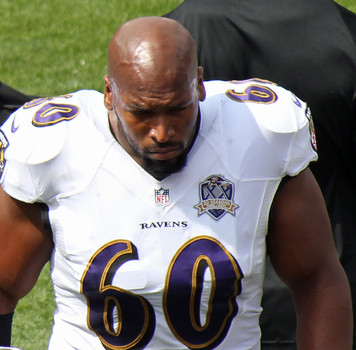 He has also taken up the mantle of being the most outspoken advocate for medical marijuana in the NFL. And he's putting his money where his mouth is. Monroe has donated $80,000 to Realm of Caring, an advocacy group that is working with the most prestigious medical school in the country: Johns Hopkins University School of Medicine.

The money will go towards studying the impact of medical marijuana on traumatic brain injury and chronic traumatic encephalopathy, a degenerative brain disease linked to repeated hits to the head. The results of studies could have an earth-shattering impact on pain treatment and the business of the budding marijuana industry.

As you could imagine, injuries and pain are huge problems for the NFL. Players are regularly tackled, pushed, and abused each and every week for our entertainment.

The findings are stunning...

According to a Virginia Tech study, football players are hit in the head 30 to 50 times a game. The study gave players specialized helmets that were fitted with the same kinds of sensors that trigger the airbags in our cars.

That's the equivalent to getting in a car crash each and every weekend.

Such violence has led to a dangerous degree of pain medication abuse in football players.

The results are terrifying...

The first study on painkiller abuse by NFL players shined a light on some very uncomfortable facts. Researchers at the St. Louis School of Medicine interviewed 644 ex-players and found:

All told, the study shows that NFL players are three to four times as likely as men their age in the general population to be misusing prescription opioids. But that doesn't mean the opioid scourge isn't just prevalent in the NFL, it's a downright epidemic in the country at large...

In the U.S. alone, 46 people die every single day from an overdose of prescription opioid or narcotic painkillers.

A new study from the American Society of Addiction Medicine has the figures to back it up:

Another horrific side effect of this trend is that four out of five new heroin users began their habit after abusing prescription painkillers. As a consequence, the rate of heroin overdose deaths nearly quadrupled between 2000 and 2013.

Here's how it usually goes down...

If you are prescribed heavy opioids for say, pain from a surgery, you take them for a few weeks and your body already begins to crave them. You may be able to get another prescription from a doctor but — after a while — any sane doctor will cut you off.

Those addicted to the pain pills will often begin buying the pills on the black market: but that gets really expensive. The typical opioid pain pill costs around $60, while heroin costs a tenth of that price.

You can see why this is a dangerous setup. I've seen it happen personally on more occasions than I'd like to admit.

We simply need a better pain alternative to deal with this epidemic.

Cannabis is used by patients globally for a wide range of symptoms and diseases, including chronic pain. The first large-scale study of patients treating chronic pain with medical marijuana showed serious promise.

In the study published in The Journal of Pain, not only did they find that patients had success treating their pain, but they also found improvements in mood and overall quality of life.

More importantly, they found very minor side effects. While the side effects for prescription opioid pain relief include death and addiction, side effects from medical cannabis include sleepiness and dizziness. I'd venture to say we'd all prefer the latter...

"This is a paper they should bring to the attention of their physician or health care provider," said the studies lead author, Dr. Mark Ware.

"Anybody who is interested in using cannabis to treat pain should know this information, as it can influence the decision-making process considerably."

Once more of these studies are made available, it will not only lead more doctors to safely prescribe it over opioid pain pills, it will also be a huge boon to the medical marijuana industry, which is still in its infancy.

Eugene Monroe knows this issue inside and out...

"The NFL relies heavily on opioids to get players back on the field as soon as possible, but studies have shown medical marijuana to be a much better solution; it is safer, less addictive and can even reduce opioid dependence. Some studies have also shown that cannabidiol (CBD) — one of the more than 100 cannabinoids found in marijuana — may function as a neuroprotectant, which means it can shield the cells in the brain from injury or degeneration. We need to learn more about this."

The more the NFL learns, the more we will. And the more options people have for treating chronic pain, the better off we'll be.

But as an investor, consider this...

The painkiller market is set to hit $8.4 billion this year.

The NFL brought in $13.3 billion in revenue last year.

Add them up and you'll get closer to what the marijuana industry could be.

Imagine investing in an industry bigger than football and pain pills, before it even fully launched. That's the opportunity you have right now.

I have three stocks for you to buy today in three different sectors of the market. (One of the companies even has ties to the most popular painkiller ever produced.)

Invest now, or you'll regret it every time you watch a football game.

Why You Should Own Cannabis Stocks Now
The legal cannabis market in the U.S. alone is expected to expand by eight times its current size in the next decade – growing from $6 billion to $50 billion, according to Cowen & Co.
The Marijuana Manifesto: Three Pot Stocks to Buy Now
Introducing the Marijuana Manifesto...
Even My Mom's Getting Hip to the Weed
The cannabis market is set to deliver outsized returns for years to come. Any talk of a bubble or thoughts that you’re too late to invest in this sector are nonsense considering it’s not even fully legal yet.
Bigger Than Beer...
Canadians love to drink beer. Beer in Canada is a $9 Billion-a-year industry. But one industry is threatening to be even bigger than beer, and it's not hockey...
Heal Your Ailing Portfolio Body