I hope you bought the VIX before yesterday’s bloodbath. During morning trading, you couldn’t even get a price on it. According to CBOE Global Markets, there was a complete absence of pricing from market markers.

A CBOE Senior Trade Desk Specialist told Reuters that VIX options became tradable at 9:51 A.M. but no trades went through at all for a full seven minutes. There was no one on the other side of the trade.

Then there was the immediate stop in trading on all exchanges. Not that it ever really helps much. All they’re good for is giving the humans a second to breathe and place new sell orders before the trading robots get back to business.

The subsequent spike when the bottleneck cleared pushed the VIX past 50 for the first time in a couple of years, and the fifth time since the Great Recession.

The TVIX, which is a pretty wonky exchange-traded note that tries to double the daily increase or decrease in the volatility index, was up nearly 500% over a month.

Some people made a fortune off it. I was not one of them. The same goes for virtually all of us, I’d bet.

We all knew the good times would end. We’ve been talking about it for quite some time here at the Outsider Club.

The only question is what would finally break through into the zeitgeist. It appears this could be it.

By “this”, I don’t mean the outbreak, though that was the catalyst. I mean that feeling we all get in our stomachs when we suddenly realize that we’ve been oblivious to the danger we’ve walked into and that it is too late to turn back.

That moment when we just freeze in place, mentally and physically, stuck between fight and flight because it’s too late for either.

I’m talking about years of cracks and rifts in the market that were papered over by buybacks and melt-ups, QE, and zero — then negative — interest rates. The Fed exhausting its tool chest to prop up a bull market and having nothing left for when it turned bearish.

I’m talking about all of the warning signs and negative news that suggested the rally was only on paper. That it wasn’t grounded in earnings, or profits, or forward guidance.

But if there was ever a clarion call that the markets are risky, downright frightening, and will blindside you when you least expect it, this is it.

It doesn’t take a bubble bursting, or a deep recession, to start gutting your retirement account and set you back years. We all have so much at stake, and it has been so easy to forget it for over a decade.

The knee jerk reaction is to rip your money out of your accounts, to hoard oat milk — which is apparently a thing that is happening — and flee for the hills.

That isn’t what this reminder calls on us to do.

It is a call to be financially prepared ahead of time by considering risk even when times are good. We’ve been doing that around here for quite some time.

Take those who signed up for Nick Hodge’s Wall Street's Underground Profits as an example.

Look at this one-year comparison chart of the Dow and a couple companies in Nick’s most recent research report: 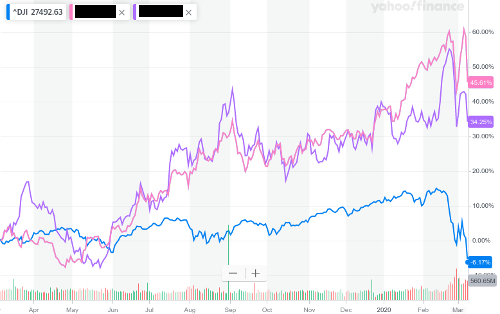 These aren’t stocks or investments that were going to tank when the market went up. Look at that chart, they started outperforming the Dow in June, long before any of this mess started. While they’ve seen some outflows that are pulling on their share prices, they’re holding their own.

With the right outlook, Nick’s readers are holding stocks that are doing well and will continue to do well as the fallout stretches through this month, through the first-quarter earnings season, and probably through the rest of 2020 and beyond.

Sure, getting on board months ago would have been best, but getting Nick’s research now is the next best thing.