Let Me Tell You About the “Murmansk Run”

Some 80 years ago, some poor young man on the HMS Sheffield, clearly not willing to smile for reasons probably related to the conditions depicted, was captured on film in a God-forsaken corner of the world: 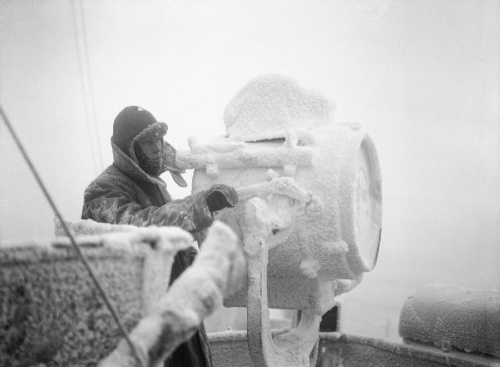 The U.S. was swirling around the maelstrom that was World War II as it sent rickety cargo ships to sleepy ports few Americans knew about — some worse than others.

Welcome to the "Murmansk Run."

Past the Atlantic — a traumatic trip on its own — and after a brief reprieve in allied ports, merchant marines ran the gauntlet from the North Sea into the Barent, on to Murmansk and Arkhangelsk. 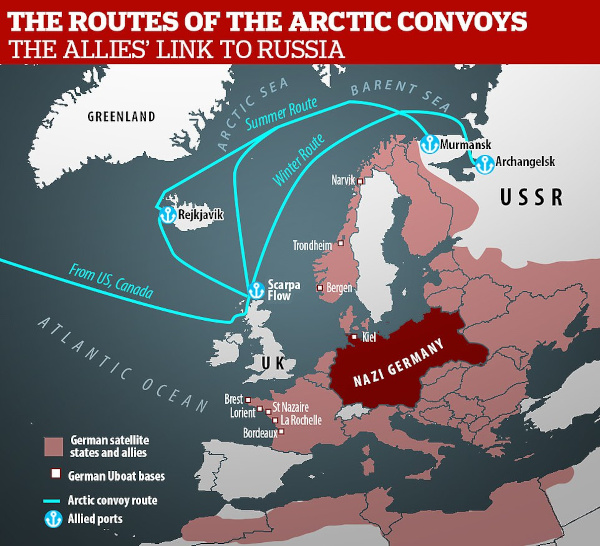 It was a stinker, to be quaint, but some very important people insisted that it happen and poor saps like the one above had to do it.

The Lend-Lease program was in full effect before the U.S. went to war and demand for everything was already insatiable. There was a new and existential reason to send stuff to places we never did before, in quantities that we never could before, across conditions we'd never asked our folks to endure before, and we had no idea if it even made any sense to try.

But we had so much. Wheat, meat, oil (cooking), oil (burning), clothes, rubber, bullets, bombs, planes, tanks, ships even — everything you could want. With 0% down. Zero interest for years. We'll even give cash back and, lo and behold!, we have a notary public on hand. It was as much a marketing campaign as it was a path to victory. And Lordy, did we win.

So why bring up the Murmansk Run? What's the angle?

There's plenty but I want to mention two that are panning out right now.

First up, this is what economic warfare looks like in the kind of way that we don't want to remember. We should, though. It comes at its greatest cost right when money becomes tight. It comes with suffering and at a cost in lives. It takes longer, goes farther, and is less reliable. Crucial shipping lines are going to falter if supplies don't first.

Ukraine feeds a lot of the world, especially the Middle East and Egypt. Who is farming wheat right now? And how can it move out of the southern ports that are under siege? I don't even want to look. Between Ukraine and Russia, 30% of the world's exported wheat market may be off the market due to an inability to farm, or move to market, or trade due to sanctions.

We should be focusing on boosting food production, especially if it comes from allies. Yet we aren't. Plan for brutal food inflation, or intense interest in some select stocks, or both.

The second isn't as dire, thankfully, but will have a profound effect.

We're going to see a reversion towards the old Cold War economic schemes. Not sanctions as much as the price-based carrot-or-stick schtick.

We're going to see all the major actors, most certainly the U.S. but also the EU and China, start cutting deals that may be at a net loss in dollars and cents but are worth so much more for geopolitical clout.

We're already seeing it rapidly ramp up in Ukraine with donations, or open-ended deals with all logistics included for delivery of the latest and greatest armaments. We're seeing it across NATO members, the further east the further the commitments go, with fresh rounds of near daily announcements.

This is just the start. We're going to see proxy-based escalation across the board. The world, especially Europe, is going to rearm and redeploy. This paradigm seems to work, if history is any judge, as long as you can spend more, and earlier, plain and simple.

As for those this will arm, the largesse of allies will tempt, then bind. Until the ledger is wiped clean though, it's clearly expected that the recipients won't stray far.

We should start thinking about a much more complex world. One that can't be reduced down to one spot-market quote for a commodity. One that we can never assume will be price-efficient. One where debt and the terms it carries come with far more implications.

We should think about far less efficient markets. We should worry about where what's in demand is made, mined, or hosted, and the international risk involved. Expect money to flow to EU- and U.S.-based stocks, especially the latter.

And, I hate to say it, but more than anything expect for things to just be bad. It's been decades since there was much of anything that truly struck close to home that wasn't purely petroleum-related. We're pretty complacent and tender, and there is a long slog through rough seas ahead.

P.S. P.S. I'm thrilled to announce my colleague Sean McCloskey just held a special event where he shared critical market advice that you need to know in these uncertain times. Sean's a master trader and embraces volatility to profit whether the market's going up, down, or sideways. He even booked a 200% gain in 20 days during one of the worst corrections in recent history. I suggest you check it out ASAP.