Why this crop will put avocados to shame...

Avocados are the pits…

I know, I know. There’s something about becoming a father that leaves you helpless when it comes to bad puns. I always swore it wouldn’t happen to me, but here we are.

Avocados are especially perfect for terrible dad jokes, like: ‘I’m between a guac and a hard place’, ‘I’ve hit guac bottom’ or ‘rock out with your guac out’ (my wife reminded me not to use that one in front of the kids…)

I applaud the humble avocado for putting up with all of these jokes while being so thin-skinned. In fact, the global sales of avocados make me green with envy:

The numbers speak for themselves; avocados are big business.

You just saw the figures for avocados. Now look at the same ones for cannabis:

As you can see, it's going to be a much more lucrative business, with far higher growth potential.

While avocados are eaten everywhere from Oklahoma to Tokyo, they are only grown in places with temperate climates. For years, avocados have come almost exclusively from three places: Mexico, The Dominican Republic, and Peru.

This is already changing.

Colombia has been ramping up its game in the avocado industry.

Less than a decade ago, Colombia did not have any avocado trees. Today, it is in the top 10 exporters of avocados worldwide — going from 2,000 tons in 2014 to an estimated 50,000 tons this year.

That's worth $60 million today to the Colombian export market.

Now it's setting its sights on cannabis exports.

Juliana Villegas Restrepo — vice president of exports at ProColombia, a government agency in charge of promoting Colombian non-traditional exports — just spoke at the Latin American Cannabis Symposium, and laid out some impressive figures.

“This is a great message for any investor who is interested in investing in Colombia to develop this industry and to use Colombia as an export platform,” she added.

She's right, Colombia is in a privileged position, with access to both Atlantic and Pacific shipping routes.

Colombia is also the perfect place for outdoor cannabis cultivation. The climate is such that you can grow plants outdoors all year long. That is one reason Colombia is the world's biggest exporter of fresh-cut flowers.

It may soon become the largest exporter of cannabis.

That's why I trekked to Colombia myself to see its operations with my own eyes...

I flew into Medellín, in the hills of the Andes mountains. With that gorgeous view, I toured the largest outdoor marijuana farm in the world, where there were acres of cannabis as far as the eye could see. 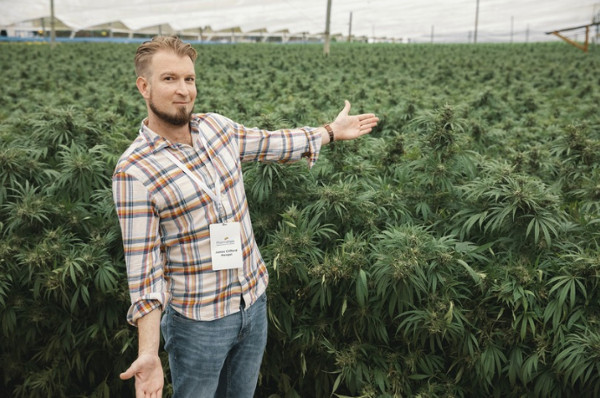 It is the first company to obtain Colombian licenses for cannabis with unrestricted percentages of tetrahydrocannabinol (THC) and cannabidiol (CBD), which could make it the world’s largest licensed producer.

The climate allows for low-cost production and this company's goal is to produce its quality, medical-grade marijuana for an astounding $0.05 per gram.

To put that in perspective, Aurora Cannabis (NYSE: ACB) — one of the largest Canadian producers — is running at around $1.93 a gram. Most companies have aggressive goals to get that price to around a dollar a gram. But that gets nowhere near what Colombian producers are capable of.

Low prices like that make it a game-changer for the global cannabis trade.

While Canadian companies are stuck fighting in a race to the bottom, this Colombian company could open up a new global export empire.

You can view all the details of my trip to Colombia right here.