Uncle Joe's first year on the job was tough.

The coronavirus pandemic — which the Biden-Harris campaign adamantly promised to defeat — has only worsened. According to a new report by Reuters, coronavirus hospitalizations in the U.S. surpassed a record high on Monday.

Meanwhile inflation is spiraling out of control.

Consumer prices in the U.S. hit a 39-year high last year — led by huge jumps in prices for gasoline, housing, and vehicles. And economists expect that inflation in the U.S. will remain above the Federal Reserve's low-term goal of 2% for at least the next two years. 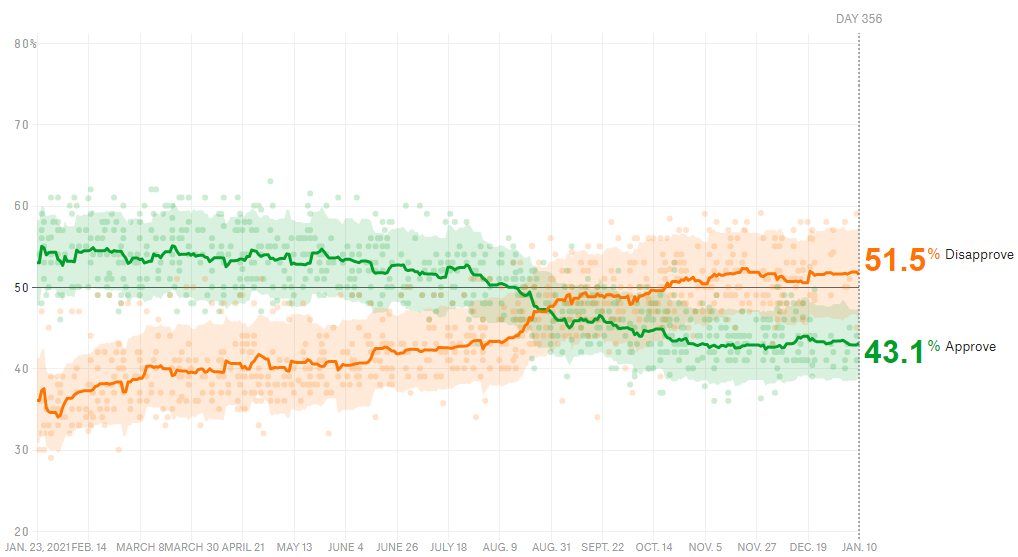 It's really no surprise Biden's approval numbers have fallen. Truth be told, most presidents see a drop in their approval figures following elections.

But Biden could be on track to record one of the lowest presidential approval ratings in U.S. history.

And that's because his administration is about to come face-to-face with a global disaster that will affect everyone on Earth: food shortages.

There has been a lot of discussion about rising food prices in the U.S. and elsewhere. We here at Outsider Club have been warning you about the rising cost of food for months. And we fully expect to see food prices continue to increase through 2022.

But what happens when food simply isn't available to buy?

It's one thing not to be able to buy a PlayStation 5 or a Rolex.

But what happens when food isn't available?

Over the past two years, local supermarkets all around the world have struggled with supply issues amid labor shortages.

Now known as The Great Resignation, workers left their jobs at record numbers in the United States last year. This led to fewer products produced and shipped and fewer consumer options. It's the reason you can only get one or two flavors of coffee creamer right now, instead of an entire rainbow of flavors.

Here's what the coffee creamer refrigerator at a grocery store looked like pre-COVID: 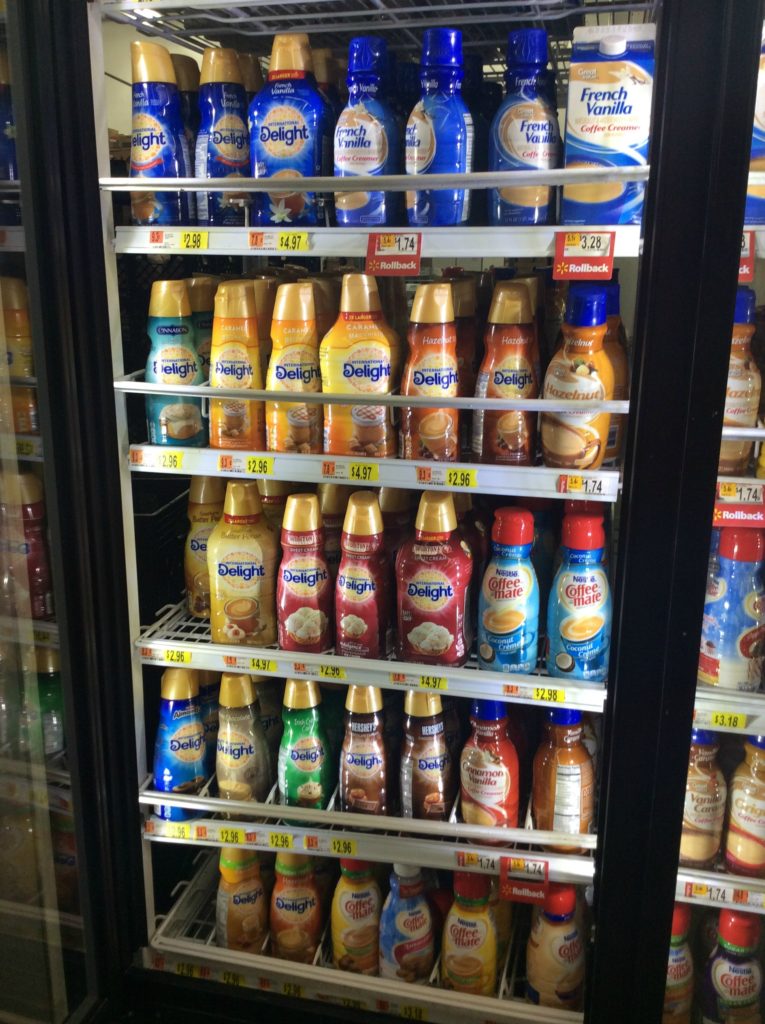 Here's what the coffee creamer refrigerator at the Wegmans near my house looks like today: 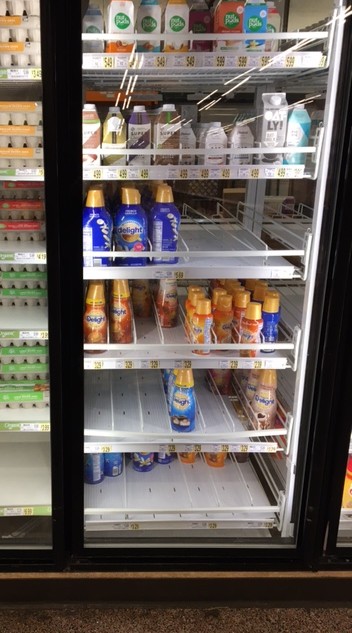 Most people can live without coffee creamer.

Items like diapers and pet food, on the other hand, are much harder to substitute. Parents can use washable cloth diapers — although that's not ideal for most. And pet owners can feed dogs and cats table scraps — although, again, not ideal.

But there are, of course, some things that humans simply cannot do without — like basic food staples.

And, frighteningly, those are starting to now disappear as well.

Over the weekend, #BareShelvesBiden was trending on Twitter as shoppers shared videos and photos of empty shelves at their local grocery stores. 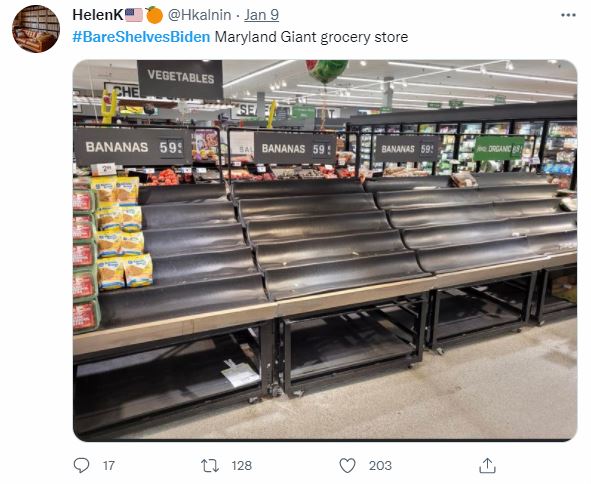 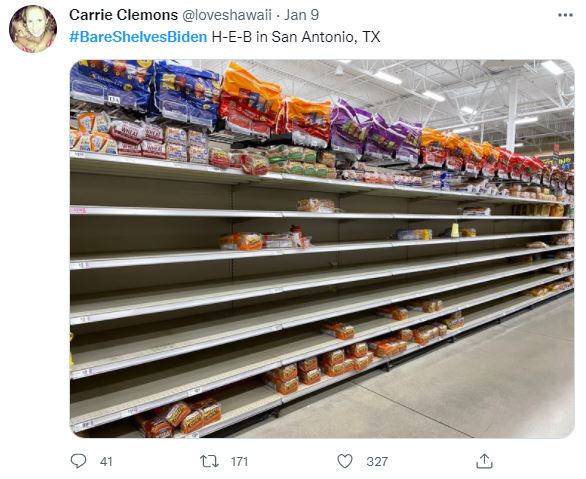 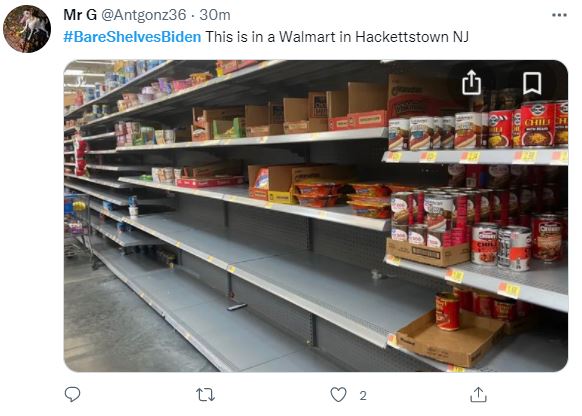 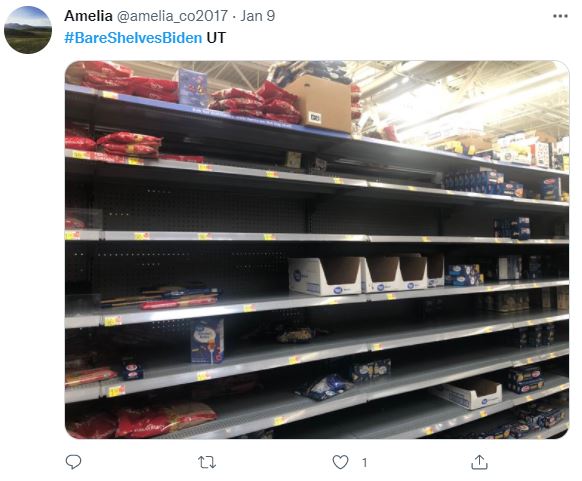 But now that basic food staples like fruit and vegetables are disappearing, the public is becoming desperate for action. To quote Biden's supposed influence for his entire platform:

So what is Biden's plan of action?

Well, so far he has done little to nothing to address empty store shelves. 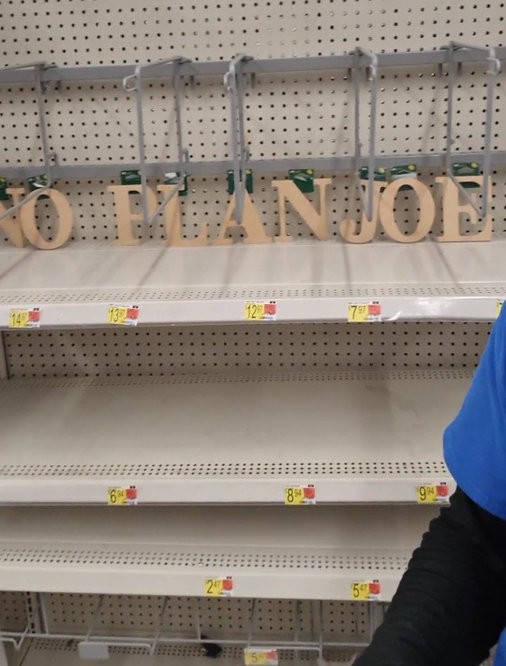 Back in June, Biden created a special task force to address inflation and rising prices and shortages of goods rooted in the pandemic.

But you've seen how well that has worked out.

And at the end of December Biden touted that a "much-predicted crisis didn't occur." But store shelves tell a different story... 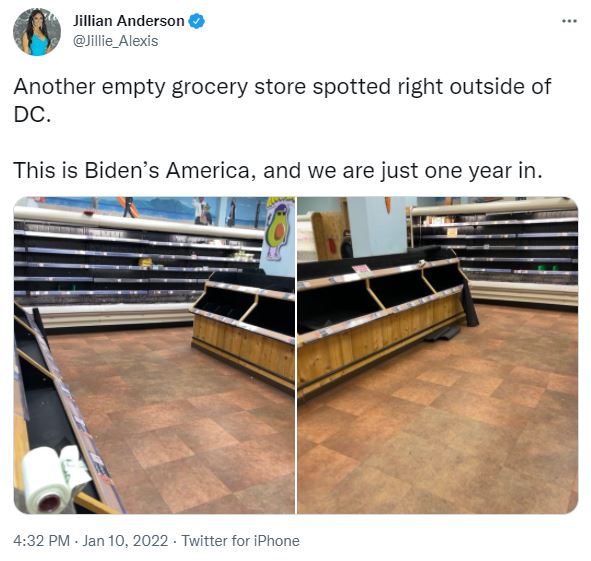 To be fair, the first thing Biden did for the new year was announce plans to combat anti-competitive practices in the meat industry, which his administration says is hurting American consumers.

But commentators (including yours truly) were quick to call the plan worthless. Andy Puzder and Will Coggin wrote in The Wall Street Journal's opinion section on Sunday:

President Biden has found a scapegoat for rising inflation: the meat industry. Mr. Biden claimed last week that meatpackers — who handle the processing, packaging, and distribution of meat raised by farmers and ranchers — are price-gouging, driving a surge in consumer prices for beef, chicken and pork. As they say in cowboy country, Mr. Biden’s claim is all hat and no cattle.

At the end of the day, there's really very little the Biden administration can do to curb either rising food prices or food shortages. And I think the lack of a clear, actionable plan is good evidence of that.

Unfortunately, there is very little you and I can do about rising food prices and shortages either. But we can hedge ourselves against those problems.

I've just finished putting the final touches on a fully detailed, 7,000-word report that tells investors all about a tiny Canadian company that is insanely leveraged to profit as food prices continue to rise in 2022 and store shelves remain bare.

This tiny, still unknown company is sitting on one of the world's most important deposits of what I've been calling a “miracle mineral” — one that is absolutely vital to modern agriculture and the food industry.

It's one of three key ingredients in modern fertilizers, which support the lives of billions of people around the world, AND it's being explored for cutting-edge lithium battery and hydrogen fuel cell technology. Check out the details on this exciting company here.