Is This Indicator Predicting a Market Crash?

It's a flaming zeppelin spiraling downwards, about to crash into the stock market.

The Hindenburg Omen is an ominously titled indicator that signals an impending market crash – and it has been triggered a lot recently.

You almost certainly have heard of the Hindenburg disaster, where an airship burst into flames and created a hellish display in the skies – leading to the deaths of 35 people and the complete dismantling of a once promising transportation system.

The high flying ship seemed to be sailing smoothly until hidden forces brought the ship crashing down in a blaze of horror and mayhem.

The Hindenburg Omen tracks disaster of another kind: the fiery meltdown of the stock market. And while you won't see bodies charred in a violent display, you may see retirement accounts wiped out, portfolios decimated, and investors struggling for answers...

For those who aren't familiar, the Hindenburg Omen is measured by the following criteria:

There have been five Hindenburg Omens in the past 8 trading sessions – an alarming frequency. You can see the struggle since the S&P hit all all-time high of 1,709 a couple weeks ago; it has been sputtering along ever since, failing to break 1,700 again. Even as the market was reaching that all time high, many stocks were hitting all time lows.

The last time the Omen appeared in such concentration was in 2007 – before the crash and subsequent bear market. Historically, the Omen has been rather telling. This chart from Jason Goepfert at SentimenTrader shows that following such a cluster of Hindenburg Omens, the S&P has taken a dive nine out of 11 times since 1965. 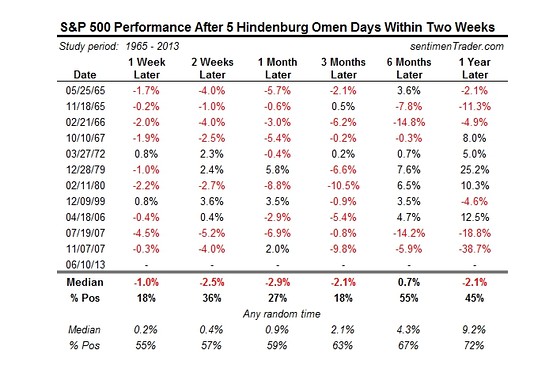 Those are some pretty good odds...

Marc "Dr. Doom" Faber – someone we can't help but think would relish in such indicators – has compared the market's behavior to that of the great crash of 1987:

[In 1987] we had a very powerful rally, but also earnings were no longer rising substantially and the market became very overbought and the final rally into August 25th occurred with a diminishing number of stock hitting 52 week highs. In other words, the new high list was contracting and we had several breaks in different stocks.

And if you look at the last two days, it’s remarkable.

[By the end of this year I see the market closing] lower than today.

That may be the scenario we're facing right now.

As with most technical indicators, you shouldn't rely completely on any single one....but it sure serves as a warning that this year's rally may be crashing and burning. Combine that with the threat of the Fed's easy money coming to a close, and we may be staring up at a fiery crash.

Ron William from RW Market Advisory told CNBC that now is “maybe a good time to take profits within the market if indeed you see more downside risk coming up."

William also mentioned that the Hindenburg Omen has predicted all the biggest declines of the last thirty years, including the 2008 financial crash.

And it's not just doomsday economists making these claims. The Omen is signaling at such a pace that even UBS's Art Cashin – hardly a Cassandra – appears to be concerned.

“There have been multiple occurrences of the Hindenburg Omen in the last several weeks", Cashin wrote in his weekly letter. "Two precedents don't make a pattern, but that sure makes that 'check engine' light glow much, much brighter."

This is the single most concentrated cluster of new highs and new lows on record...and the more occurrences that cluster, the stronger the Omen becomes.

The real Hindenburg disaster shattered confidence in giant airships. If the recent Hindenburg Omens come to pass, it may be the market confidence that finally crashes and burns.