More than 25% of all U.S. dollars in circulation right now were printed in the past 12 months.

Think about that for a moment...

For every three dollars that existed this time last year, four are now in circulation.

And that's not even considering the broadest definition of money. As measured by M1, the Federal Reserve has increased the supply of greenbacks by 350% in the past year! 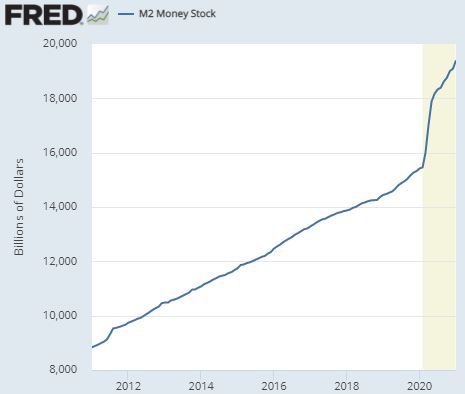 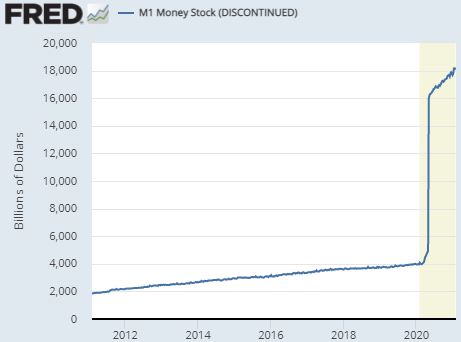 Despite this massive influx of new cash, the value of the U.S. dollar and long-term inflation rates have remained relatively stable throughout the COVID pandemic.

But that's all going to change soon.

And when it does, the value of gold as a safe haven is going to absolutely skyrocket.

The Quantity Theory of Money

It has a fancy name. But it's a simple concept.

The quantity theory of money states that the value of money (and price levels for goods and services) is directly proportional to the amount of money in circulation –– aka the money supply.

In other words, the more money that's created, the less valuable all the existing money becomes.

So with such a drastic increase to the U.S. money supply in the past 12 months, we should expect a significant decline in the value of the dollar.

But that's not how it has been shaking out.

The relationship between the money supply, demand, and value is accurate as it is presented by the quantity theory of money. But it only works perfectly in theory.

There are many other factor in the real world that can work to curb currency debasement, despite massive money printing.

The factors that worked to support the value of the USD and sideline inflation in goods and services over the past 12 months include lower industrial output, declining employment and wages, and an ongoing rally in the stock market (which many argue is inflation incarnate).

But the main thing that has held back inflation and helped to support the value of the USD has another fancy name.

The Velocity of Money

The velocity of money is extremely important to its value. That's because, in a way, the only money the market values is money being used right now.

If money is sitting in a bank (or sitting invested in stocks or other assets) it's not being used to bid on the price of goods and services.

Money that's not being actively used is... well, not being used. It's effectively removed (temporarily, at least) from the value equation. 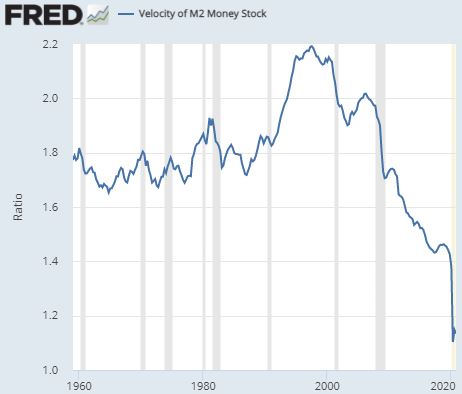 The slowdown in the velocity of money has so far helped mitigate the effects of the Federal Reserve's eye-popping expansion to America's money supply.

Nevertheless, there are growing signs the the velocity of money will quickly return. When it does, all those trillions in recently printed dollars will be used to drive up prices for goods and services and drive down the value of the USD.

And there's only going to be one safe asset to be in at that point...

It's the asset millions of people have turned to for thousands of years when faced with monetary crisis... 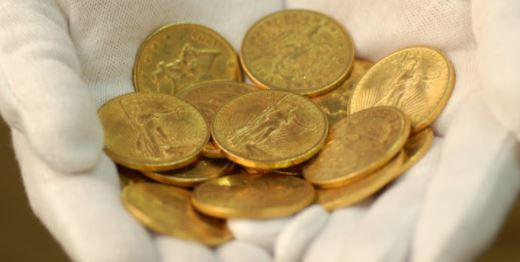 As a result of the insanely loose monetary actions taken to combat the COVID pandemic as described above, gold is set to experience one of the greatest and most powerful bull markets in history.

We called that a “bull market” back then.

But what's coming will make the 2011 gold rally look minor in comparison.

And forget the gold bull market of the 1970s.

Although it's often hailed as the greatest bull market for gold ever, the 1970s gold bull market will become secondary to what's about to come.

I'm not even sure calling gold's next move a “bull market” will suffice in describing price increases. What's coming next might be better described as a “hyper-bull market.”

We're talking about an event for gold that will be studied by future economists, argued by future academics, and honored by future gold bugs.

It will disrupt monetary and fiscal policy. And it will make fundamental changes to global economies. It will change perceptions of fiat money. And it will force currency revaluations.

It will completely bankrupt some. And it will make others insanely rich.

But you'll only have one chance to take part in this bull market –– one very brief chance, with the window of opportunity quickly closing as we speak.

The people of the United States are ready to get on with their lives. Texas Gov. Greg Abbott just issued a wide rollback of restrictions yesterday, lifting a mask mandate and saying most businesses may open at full capacity next week. I'm sure other states will quickly follow suit.

In other words, gold is an easy bet to make going forward.

But not all gold investments are created equal.

Some gold investments are better than others. (Go ahead, cancel me.)

Investing in physical gold bullion is a safe option. But physical gold isn't always immediately liquid and it has limited upside potential.

Let's say gold gold does go to $10,000 and you bought a bunch of gold at $1,750. That would net you a 470% gain, which is great. But it's nothing compared with the quadruple-digits gains investors can make in the right gold stocks in the right market.

Last year a group of mining and finance guys from Canada put together a new company, hoping to repeat that kind of success. They set out to explore a large gold project in Newfoundland with an ambitious drill program. They started drilling in August, and in October they reported the first drill results.

What they found was nothing less than incredible — amazingly high-grade gold intersected at substantial widths. The initial grades were as high at 93 grams per tonne (g/t) of gold.

To give that grade some perspective, gold ore for mining is generally considered high-grade if it has at least 10 grams per tonne. So what this company found right off the bat was super-high-grade material.

Then they did it again...

Through November and December, this company released news of several very high-grade drill results that ranged between 20 and 40 g/t gold.

Just a few days ago, they announced they've hit a hole that graded over 200 g/t gold!

This small company is, without a doubt, the most exciting gold explorer on the planet right now. They're still finding high-grade gold material and they're doing it at a time when gold prices are set to explode.

The problem right this second, though, is the gold market. There's little interest in gold stocks right now.

The price of gold started the year off very strong, charging past $1,950 an ounce. Most thought the yellow metal was headed back over $2,000. Yet gold prices only languished over the next several weeks amid rising U.S. Treasury yields, strength in the dollar, and a rally in the broader equity markets that seems like it can't be stopped.

But all that's temporary.

In short, it's the perfect time to start investing in gold — and this is the best-positioned gold stock on the market for massive gains.

By the way, some of the drill holes that helped the other company, Aurelian Resources, shoot 5,600% higher in 2006 included grades like:

So you can see why I'm so excited about this new small company now. I will be releasing a full report on this exciting company exclusively to Outsider Club tomorrow. So be on the lookout for that.