What if I told you that a leisurely competition gave out more than $30 million in cash prizes? Would you be interested?

Of course you would.

But I’m not talking about the lottery, the World Poker Tournament, or even the Masters.

I’m talking about video games. And some kids today are making more money playing them than some of the biggest names in professional sports.

Kyle Giersdorf, a sixteen year old, just won the Fortnite World Cup Finals, earning himself — get this — a cool $3 million.

One Twitter user pointed out the gravity of such a win:

“In case you’re wondering if eSports is really going to be that big of a deal, the winners of the Fortnite tournament just brought home $3mn… Which is $1mn more than Tiger made for winning the Masters.”

Let that soak in... a teenager just made more money in a day than Tiger Woods.

Now, I know plenty of you are probably apoplectic and confused that these kids could make more than most of us have in our life savings for one day of playing a video game. I'll admit that it burns me up a bit too. If I knew that, I would have probably played more video games.

But I don't want to get into the argument about dweebs in basements whittling their lives away on what many consider to be frivolous hedonism.

It has to do with making money...

Now, in full disclosure, I’ve grown up my entire life with video games. One of my favorite memories is waking up on Christmas Day to find The Legend of Zelda sitting under the tree.

My brother and I loaded it into our Nintendo immediately, and became completely lost in this new, electronic world. Exploring the digital world of Hyrule was mesmerizing, addictive, and powerful. We played that Nintendo into the ground — it actually broke.

Things were so simple back then...

The rub is this: while I used to mow lawns, wash cars, and save for months to buy a video game, the script has totally flipped. Now kids are becoming multimillionaires for doing what I used to do to waste time.

Just look at some of the money made in video game tournaments over the past few years...

Kuro “KuroKy” Salehi Takhasomi is the single highest-paid eSports player in the world. He has already pulled in over $4 million. His “Team Liquid” won The International 2017, pulling in over $10 million.

All for playing a game where your avatar helps others defend bases, like some dystopian version of capture the flag.

But just look at the size of the crowd: 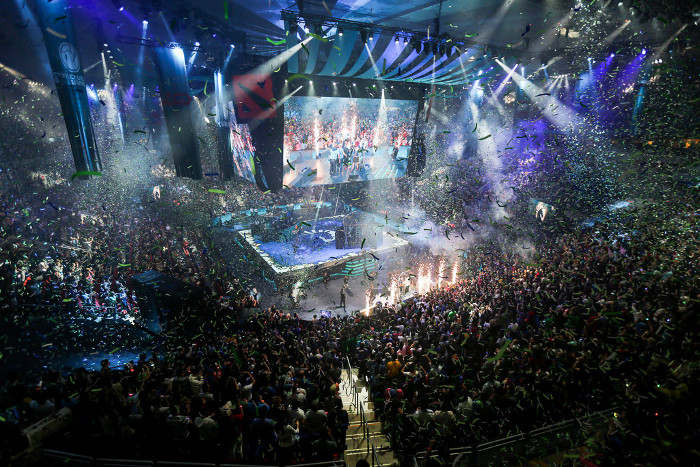 When I wasn't playing video games as a kid, I occasionally played soccer. Boy was that a waste of time.

Germany's Mohammed Harkous just scored $250,000 for winning first place in the FIFA eWorld Cup Grand Final. A quarter-million bucks for an afternoon. Not too shabby.

Lionel Messi — the most famous soccer star ever AND the richest athlete in the entire world — makes around $645,000 a game.

Harkous isn’t an international soccer star, he was playing a soccer video game.

I could go on and on. However, there are ways that you can cash in without ever picking up a PlayStation controller...

Take-Two Interactive (NASDAQ: TTW), for instance, has gone on a wild tear over the past few years.

If you invested in Take-Two Interactive five years ago, you would have reaped a 527% gain.

It shows no signs of stopping. The company just reported adjusted revenue of $422 million for the fiscal first quarter. That beat the Wall Street estimate of $357 million. Take-Two also posted per-share earnings of $0.27 for the quarter, surpassing the average analyst estimate of $0.04.

It seems like investors and Wall Street haven’t given the power of video games their respect.

To tell you the truth, I never really did either. But that is about to change. You can expect more coverage of this expanding market in these pages going forward.

It reminds me a lot of the early cannabis market. Most readers and investors I talked with wrote off cannabis the same way: it’s for stoners, it’s a fad, I'd never use the products and so on.

We saw what happened there.

I believe that video games will be very similar. Most investors won’t appreciate the organic growth until it’s too late.

Don’t let your bias get in the way of your fortune.