I want to wish a Happy New Year to you all...

I hope you spent time reflecting on the year: counting your blessings, tallying your vices, and simply enjoying some well overdue time with family and friends.

Aside from silly hats, midnight kisses, and champagne hangovers there is one New Year's tradition that almost everybody participates in: the dreaded New Year's Resolution.

This isn't just anecdotal evidence. If you look at the top New Year's resolutions, you'll notice a serious pattern... most of them have to do with staying healthy. In a recent Nielsen survey, the top resolution Americans made was “Staying Fit and Healthy.” The second was losing weight, which tends to go hand-in-hand with healthy eating.

Luckily for all of you health-minded resolutionists out there, it is getting easier and easier to find high-quality health food. Almost all grocery stores now carry a robust section of organic foods, and even packaged foods free of artificial ingredients.

The trends have been going heavily towards a world with healthier, organic, local, and generally more responsibly manufactured foods. Just look at the sales figures for organic food over the past few years, and the projections for this year and the next: 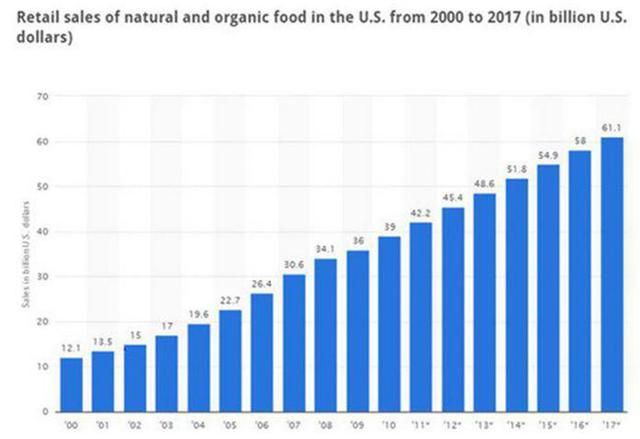 This is one trend that isn't going away, and you can easily play it in your investments going into 2016 and beyond.

Here are two stocks for a healthy, organic portfolio...

Now, when most people think of organic, healthy foods, one company comes to mind: Whole Foods (NASDAQ: WFM). But I wouldn't recommend plowing a bunch of investment capital into Whole Foods. It certainly enjoyed a nice run when it was the only game in town and was able to price its products accordingly — leading to its ignoble “Whole Paycheck” moniker.

But it has now been dethroned as the number-one organic food retailer. Wal-Mart (NYSE: WMT) has overtaken it, and is able to offer far lower prices on organic goods. Traditional grocery retailers like Costco (NASDAQ: COST), Safeway (NYSE: SWY), and Kroger (NYSE: KR) have also cut into its market.

While I'm sure Whole Foods will do just fine due to its branding and cult-like following, I'd prefer to look elsewhere for stocks with more upside...

Like the companies that provide all of these retailers with their products...

Since I'm more bullish on producers than I am retailers, it's important to note that Wal-Mart is the second largest distributor for Hain Celestial products and accounts for over 10% of its sales. We expect that number to grow alongside the rise in organic consumers, representing a nice solid base for a company that is constantly expanding.

It has recently acquired several new brands which should help diversify its company. In the last year it has acquired Rudi's Organic Bakery, one of the leading organic and gluten-free companies, and Orchard House Foods, one of the leading providers of prepared fruit, juices, and desserts.

The consensus price target from analysts that cover Hain Celestial is $61.39.

It is now trading at around $40, which represents a great short-term gain of 50% — not to mention the long-term growth that could make this a triple bagger in a couple of years.

Being that long-term earnings per share growth rate stands at around 12.4%, we can expect Hain Celestial to keep rewarding shareholders for the long term.

It is also the leading distributor to Whole Foods, which accounts for one-third of its revenue. It is a crucial relationship for the company, and it has recently extended its contract with Whole Foods until 2025. It also distributes wholesale private-label products for large grocers like Publix, Costco, and Trader Joe’s.

But the company's stock has had an absolutely horrible year:

It has shed almost 50% since January 2015, from a high of $83.53 to its new low, which is sitting around $38 right now. That drop is mostly due to the termination of a contract with Albertsons Companies, Inc. — which includes Albertsons and Safeway chains.

While that was a blow to the company, I think that kind of drop may represent a buying opportunity...

The average 12-month price target among analysts who covered United Natural Foods in the past year is $54.06.

That represents a short-term upside of over 40%.

Perhaps the most interesting news about United Natural Foods is that it might be a takeover target, with rumors linking Sysco Corporation (NYSE: SYY), U.S. Foods, and Whole Foods (NASDAQ: WFM) itself to the takeover.

This would be a boon for the stock...

Until then, I wish you luck with whatever New Year's resolutions you've committed to, and look forward to a new year of profits and prosperity.