Investing in a Car Crash

How a childhood accident turned into a great investment...

It was a beautiful Spring day and I was driving home from school in my prized 1994 Ford Probe. In what seemed like slow motion, a classmate's red Chevy Camaro blew past a stop sign and directly into my path. There was no time for me to even hit the brakes, so I T-boned him at full speed — shattering his tibia and sending his four seatbelt-less passengers pinballing into the windows and seats.

The crash completely destroyed both of our cars.

Anyone who's been in a high-speed automobile accident can tell you that it is the worst kind of terror, and I'm beyond blessed that my classmates in the other car weren't gravely injured. Personally, I escaped with minor airbag burns.

We were lucky, but the fact remained that my car did not survive.

I had paid for that Probe in cash just months prior. I took a job at a local restaurant when I turned 14 in order to pay for it. My parents said at the time that if I bought a car myself, I would take much better care of it than if they just bought one for me. For a few months they were right — I washed it every weekend, vacuumed it religiously, and even changed my own oil.

I was proud of that Probe — despite occasional teasing regarding the obvious “anal-probe” joke.

This is all a strange and circuitous way to tell you why the Ford Motor Company (NYSE: F) could be a very interesting investment, 20 years after my car crash...

Here's Ford's chart since that crash: 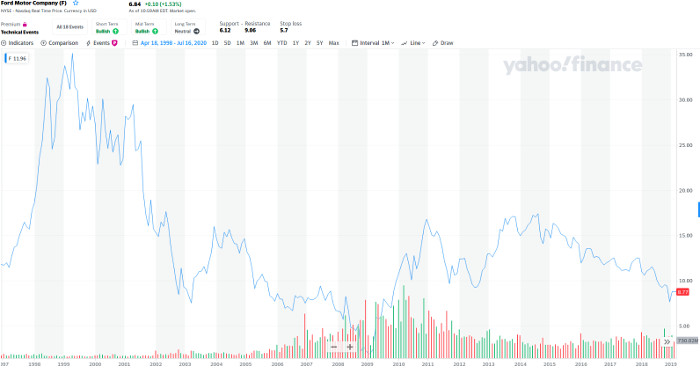 Had I invested in the twisted vehicle I was driving, I would have lost nearly half of my money. But I think Ford's luck is about to change.

For one, it just debuted its most exciting car in years: the iconic Ford Bronco.

Now, of course, we all remember that fateful day in 1994 when Heisman Trophy winner, Hertz Rental Car salesman, and obvious murderer O.J. Simpson led the world's most popular low-speed chase in a famous White Ford Bronco. Almost every American alive at the time remembers where they were when it happened. It was referred to as "the most famous ride on American shores since Paul Revere's" and didn’t do the Bronco any favors. It became a national punchline and was dropped less than two years later.

But it's back baby, and it looks fabulous... 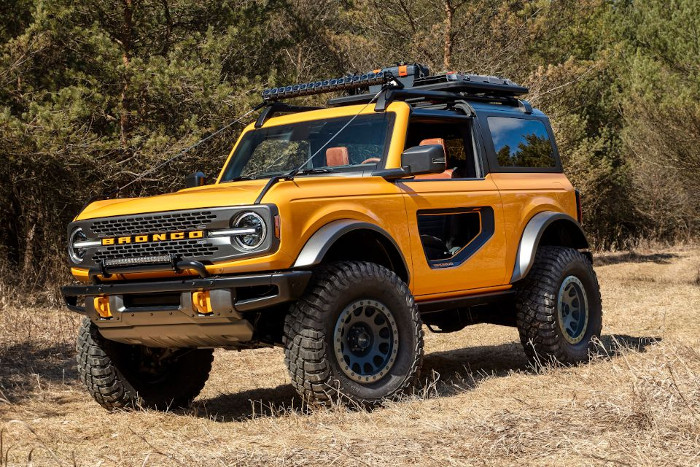 Ford started taking reservations for the SUV Monday night and sold every one of the 3,500 First Edition models. Now, had I not bought a Jeep Wrangler two years ago, I would have certainly given this a look. It's modern, attractive, and better priced than the Wrangler, which is a massive seller for Chrysler-Jeep. Dealers can barely keep them in stock.

Here are the Wrangler sales figures for the past few years:

During a closed-door meeting that was leaked, Ford told its dealers that it expected to sell at least 200,000 Broncos in 2021. That would be a huge boon for a company that has struggled to stay relevant in recent years. However, the Bronco isn’t the only trick Ford has up its sleeves. Keep in mind that it still corners the truck market with the bestselling Ford F-150 and F-Series pickups.

You can see just how mighty Ford trucks are in this chart: 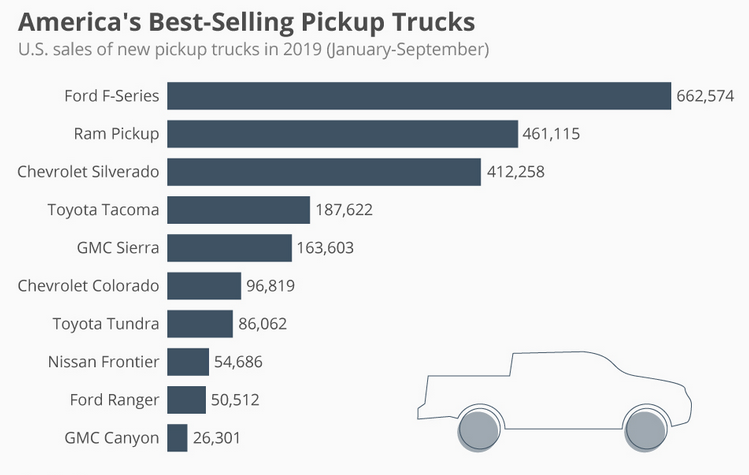 It has announced a series of electric-pickup trucks that will start debuting as soon as 2022. From MOTORTREND:

Electric motors are coming to the Ford F-150. The 2021 F-150's PowerBoost gasoline-electric hybrid drivetrain comes first, which combines a twin-turbocharged 3.5-liter V-6 engine and a 10-speed automatic transmission with an integrated 35-kW electric motor. The hybrid merely marks the beginning of the F-150's electric embrace. Come model-year 2022, the F-150 will add a true battery-electric drivetrain to its options menu. The model may don the name Everglades (likely cheekily badged EVerglades), or it may just be called the F-150 Electric.

Ford will soon be releasing earnings, which will likely be disappointing due to the pandemic situation and lack of exciting vehicles that are currently for sale. However, with potential blockbusters in the Bronco and the electric F-150s, Ford could push itself back into the competition for U.S. automakers. Sadly it had to suspend its dividend, which reached an untenable 13% earlier this year, but if it gets these new fleets sailing by 2021 and 2022, you could be buying Ford at a major discount and reaping dividends once it gets back on its feet.

The Bronco and especially the F-150 electric pickups will be massive hits. Tesla (NASDAQ: TSLA) has already made waves this year with its electric pickup truck and Nikola (NASDAQ: NKLA) has followed suit with its Badger truck. Neither have actually launched the vehicles, yet both stocks have enjoyed triple-digit gains this year.

But my money is on one Canadian company that has quietly built up one of the most impressive electric truck fleets in the world. It's not sexy like the new Bronco, it doesn't get headlines like Tesla, but it will outperform each of these companies over the next year. And it's already delivering...

Check it out here.