Inflation Is Soaring but Gold Is Snoring

The Bureau of Labor Statistics released another hot inflation report yesterday, announcing an 8.3% increase in the consumer price index (CPI) over the past year. This marked the sixth month in a row annual CPI has increased more than 8%. 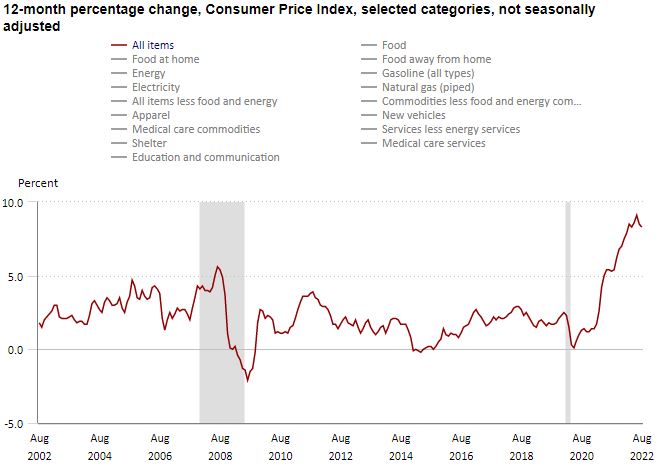 And, of course, this really comes as no surprise.

Economists and analysts like myself have been warning about significant inflationary pressures resulting from the outrageous amount of money created and handed out as “COVID relief.”

In the span of two short years, the U.S. government increased the supply of dollars by a whopping 40%! 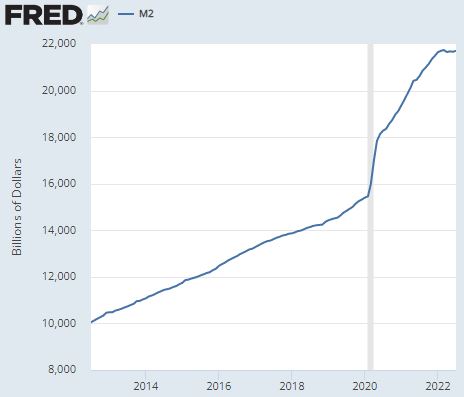 According to a report by The New York Times, about a third of that money went to individuals and families, mostly in the form of economic impact payments. The rest went to businesses and the government itself.

Regardless of who got the money, however, such a drastic increase to the supply of dollars was bound to produce inflationary pressure.

The so-called “quantity theory of money” says prices for goods and services are proportional to the money supply in an economy. The more money that exists within an economy, the more individuals, businesses, and governments have in their pocket to spend and drive up prices.

Of course, nothing exists in a vacuum, and there are a multitude of factors that influence the price of goods and services. But generally speaking, more money in the economy means higher prices.

And the U.S. government added a lot of new money to the economy in a very short time. “COVID relief” was one of the (if not the) largest expansion of U.S. money supply in the nation’s history. Of course, the government and Federal Reserve tried (and are still trying) everything they could to calm investors as inflation increased. 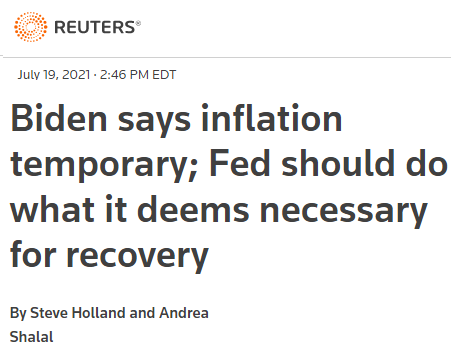 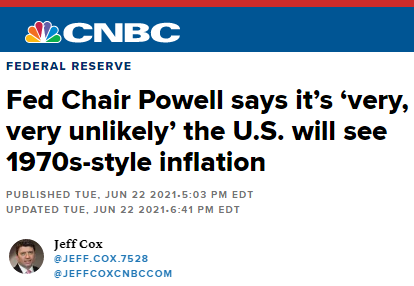 But there really never was any doubt over whether inflation would increase and remain elevated for a sustained period.

So gold bugs were pumped.

The last big gold bull market was in 2011, following the U.S. government’s then-called “quantitative easing” programs. These were different types of programs, but they also resulted in the U.S. government creating a bunch of new money.

Between 2008 and 2012, the government created billions of new U.S. dollars used to address the financial crisis of the time. Inflation soared, and gold prices spiked to an all-time high.

Harness the Power of the XL Gold Cycle Today!

Join Outsider Club today for FREE. You'll learn how to take control of your finances, manage your own investments, and beat "the system" on your own terms. Become a member today, and get our latest free report: "Gold to ,000: The Power of the XL Gold Cycle." In it, you'll see a how a golden pattern has consistently created millionaires for the past 200 years!

This time was different.

The government wasn’t just adding billions of dollars to the money supply — it was adding trillions! Compare the two periods of monetary expansion. 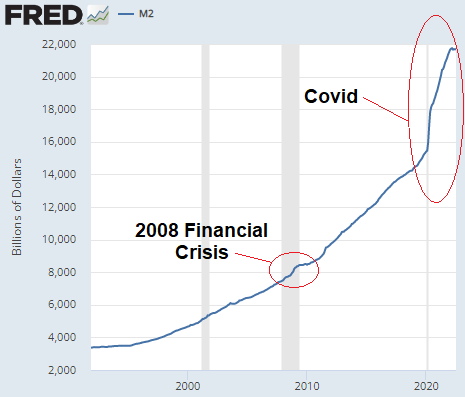 So, yeah, gold bugs were excited.

But gold is snoring.

In the past 2.5 years, gold has seen two very brief rallies that took prices past $2,000 an ounce, including one back in March as Russia's invasion of Ukraine kicked off. Yet despite annual CPI averaging more than 8% since March, gold has lost value week after week.

Again, nothing exists in a vacuum, so there are a million factors influencing the price of gold. But the two main factors are lower demand for gold jewelry and a soaring U.S. dollar.

About half of all the world’s gold demand comes from the jewelry industry. According to the World Gold Council, quarterly gold jewelry demand increased slightly in Q2 2022 compared with the second quarter of last year. However, the market for gold jewelry remains weak compared with pre-pandemic norms.

The council says, “While global jewelry consumption has recovered from the worst of the COVID-induced weakness seen in 2020, it has yet to regain the typical quarterly averages — of around 550 tonnes — that characterized the few years preceding the pandemic.”

Meanwhile, the value of the U.S. dollar has been absolutely ripping higher over the past nine months.

As measured by the U.S. Dollar Index, the value of the greenback currently sits at over a 20-year high. 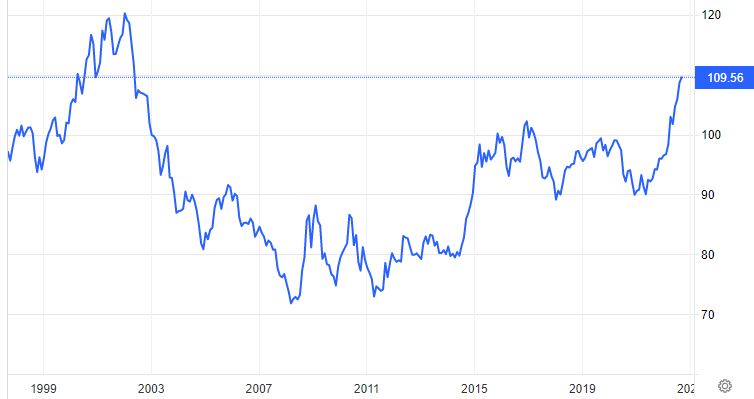 So what happens to gold from here?

Well that’s very much dependent upon jewelry demand and the U.S. dollar. But I think the dollar will be the main driver of prices in the near term.

It’s important to note that the last time the value of the greenback was this high, gold was at $300 or $400 an ounce. Then after the dollar pulled back, gold kicked off a bull market that lasted until 2011. 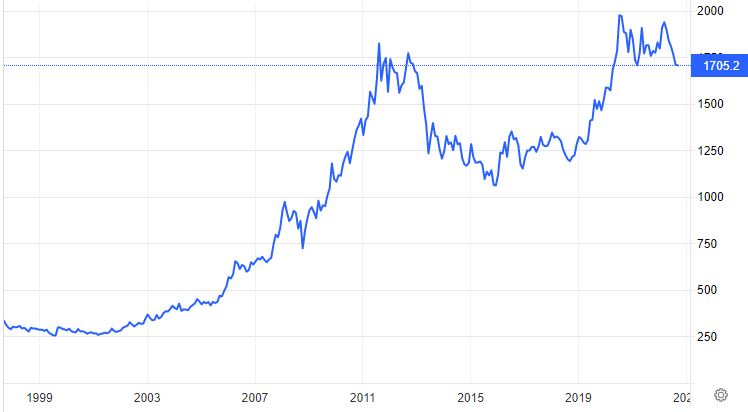 The rally in the U.S. dollar won’t last forever, and there’s no telling how much higher the U.S. dollar will go. But sooner or later, the rally will end. When it does, I think gold will come roaring back.