I Just Made My Friend a Fortune

And not the way you think...

Now, I’ve made some great gains for my readers in the past: one wrote in saying that he made over $100,000 on one of my recommendations. But I’ve certainly never made someone that kind of money in just a slice of an afternoon.

I do not say this to brag, as many financial writers are all too happy to do. The fact is that the tip I gave Spike wasn’t on some penny stock or a well-timed short. It was based on my deep knowledge of the game of football.

You see, my buddy lives in Las Vegas, and when I was on a research trip to Sin City earlier this year, we placed a couple of small wagers on some baseball and basketball games. It was nothing crazy — fifty bucks here, a hundred there — but I managed to win every single time. It was fun to have some skin in the games while watching them in the extravagant sports bar in my casino, and they yielded enough to pay for some fancy dinners.

Spike was impressed. He’s an avid gambler and started asking my advice when he betted on games that I was well versed in. So when he called me for advice on my hometown Baltimore Ravens, I was more than happy to give him the skinny on a game that I was about to attend myself…

I was excited already, since it was the first game I’ve been able to catch since the pandemic hit. It was the Ravens versus the L.A. Chargers — a formidable opponent. 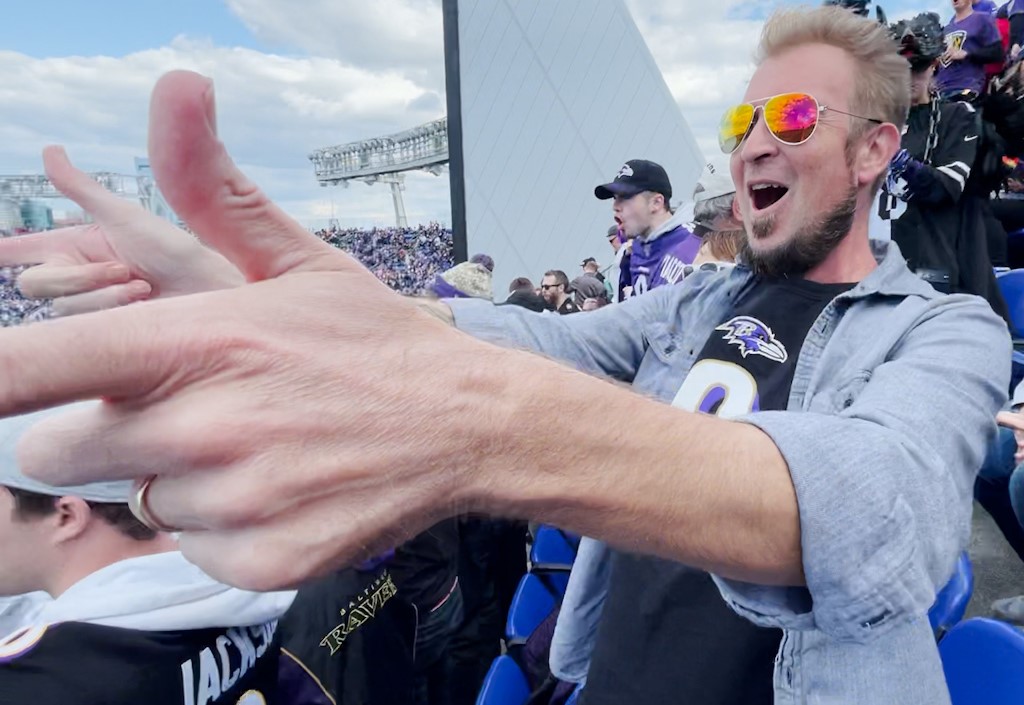 Jimmy, way too excited about football...

The point spread was plus-3.5, which means the Ravens had to win by more than a field goal to win a bet. That line screamed to most gamblers to bet on the Chargers, which almost every TV analyst was picking to win the game outright. They have a very talented big-time quarterback in Justin Herbert, who is a front-runner for the MVP this year.

But the Ravens have Lamar Jackson, who is the most dynamic quarterback I’ve ever had the privilege to watch in the flesh. He is the best running quarterback in history at the tender age of 24, and the Chargers have no rush defense to speak of.

Gamblers already knew those facts. What Vegas didn’t seem to consider was another couple of factors that I knew quite well.

For one, the Chargers had to fly across the country to play the game. Traveling anytime isn’t easy, but flying from the West Coast to the East Coast for a 1 p.m. kickoff is especially brutal. The Chargers’ bodies were thinking it was 10 in the morning. Not exactly the best time to start smashing yourself into elite athletes.

According to BettingPros, West Coast teams have gone 27-39-5 against the spread when they have had to travel to the East Coast. That was one thing in the Ravens’ favor.

The other was that they were playing at Baltimore’s M&T Bank Stadium, which is like walking into the Roman Colosseum on free sword day. It is crowded, bloodthirsty, and LOUD. And it’s very tough to concentrate as a quarterback when you have to shout play calls that nobody on your team can hear.

Sorry, not trying to get too down in the weeds about football, but you get my drift. Much like the stock market, there is always crucial information that the talking heads are too distracted to see. I saw information that the mainstream wasn’t talking about and confidently told my friend to make a strong bet.

“The Ravens are going to win this game by way more than three and a half points,” I told him. “Go for it.”

Thankfully for Spike, he took my advice and was handsomely rewarded after the Ravens slayed the Chargers 34-6.

But you don’t have to place bets on games of chance. In 2019, Nevada handled a total of $5.32 billion in sports bets. That’s peanuts. The industry is spreading out far and wide.

After literally hundreds of years, the ban is finally being lifted on an industry that’s as old as sports itself...

Sports betting is expected to be a $150 billion dollar industry in just a few years. That’s because the Supreme Court itself overturned the illegality of state betting laws in 2018. States have been rushing in to stake their claims. It’s brought one of the oldest industries out of the shadows and into the sunshine.

Right now, a quarter of Americans live in a state that allows legal sports gambling. That is going to double in no time. Three of the most populated states — California, Texas, and Florida — will legalize the industry in short order.

As these legalizations sweep across the country...

They’re unshackling a $516 billion market. And all at once, billions of dollars in profits are suddenly appearing on the balance sheets of a very select group of companies.

I mean this quite literally — billions of dollars in totally new revenue is showing up on the books, almost as if by magic.

The sports world will never be the same.

And as this trend continues, it’ll ignite a record-breaking run for a short list of stocks.

I’ll be unveiling a video report over the next few days with three companies that will gain the most. Keep your eyes peeled.

You could make Spike’s windfall look like peewee football.