How to Hedge Against Rising Food Prices

There’s an old episode of "The Simpsons" that begins with Homer taking the family to a grocery store. While the family is there, Homer becomes disappointed to learn that he can't afford the live lobster from the tank.

At $8 per pound, the price of lobster is just too high for the Simpson household.

But that's when Homer gets a bright idea...

Instead of buying a full-size adult lobster, he'll purchase a small juvenile lobster, feed it fatty foods, and eat it later.

He proudly proclaims to Marge, “I tell ya, I’m a financial genius. I buy an $8 lobster, fatten it into an $80 lobster, and eat the profits!” 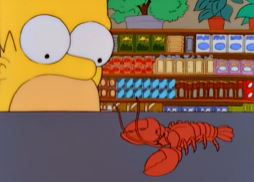 "The Simpsons" is well-known for having accurately predicted the future dozens of times.

It's said the show foresaw everything from the presidency of Donald Trump to Disney acquiring 20th Century Fox.

And, now, with food prices soaring to multi-decade highs, Homer’s lobster venture might be yet another accurate prediction made by "The Simpsons."

A TV station in Tennessee reported on Monday that one local man is fed up with the rising price of fish at the grocery store.

Harvey Tallman told WBIR News, “The price of food has gone to the point where you can't afford to buy it… When you go to the store, check on the price of fish. It's almost $9 a pound. It's ridiculous."

WBIR reports that Tallman installed a 1,000-gallon water tank in his backyard and stocked it with 100 juvenile bluegill.

Unfortunately, WBIR did not interview Mrs. Tallman. Because I sure would like to know what she thinks of Harvey’s seafood operation.

On the surface Mr. Tallman’s fish venture is a bit humorous. But I don’t think Tallman deserves to be mocked or shamed in any way for his effort. In fact, just the opposite. Truth is, he’s doing more to fight food inflation than most of our elected politicians.

And Tallman is not alone by any means. All over the country, people are growing more of the food they eat to combat inflation. Here are just a few recent headlines:

As much as I respect people like Mr. Tallman who are growing their own food to combat inflation, I think there’s a better and easier way to hedge yourself: Invest in fertilizer stocks.

Fertilizer is a major expense in agricultural operations. The U.S. Department of Agriculture says fertilizer accounts for between 33% and 44% of a farmer's operations. So any significant increase in fertilizer prices will have to be passed down to the consumer.

And for more than a year now, fertilizer prices have been increasing at an alarming rate.

Here is the price change for the most used fertilizers over the past twelve months:

Despite who is to blame, it's likely we will continue to see increases in both fertilizer and food prices across the board. To hedge against these increases, investors can own fertilizer stocks.

The two largest fertilizer stocks in North America are Mosaic Co. (NYSE: MOS) and Nutrien Ltd. (NYSE: NTR). Both have performed very well over the past year, increasing about 57% over the past 12 months.

Both Mosaic and Nutrien are multi-billion dollar firms. Their upside is limited.

But I’ve recently discovered a tiny, almost completely unknown Canadian development company that owns the rights to one of the largest undeveloped fertilizer projects in the world.

And the best part is after 10 years of exploration and development, the project is now ready to begin producing.

If this project was ready five years ago, very few people would have cared. Five years ago, people weren't worried about skyrocketing food prices. But today with fertilizer prices breaking all-time price records, there's never been a better time to own an important fertilizer asset.

It's a project that is so exciting and has so much upside potential, I think it's going to be one of my biggest winning stock picks in my 20-year career. I've just finished putting the final touches on a fully-detailed, 7,000-word report that tells investors all about this company and its incredible project. And you can get access to this report right now for free. Just click here.