War is peace. Freedom is slavery. Ignorance is strength.

“If you want a picture of the future, imagine a boot
stamping on a human face... forever.”

Yesterday, concerned citizens around the United States took to the streets for 1984 Day as thousands of patriots in over 20 cities participated in the Rally Against Unconstitutional Surveillance to protest the NSA's widespread spying on law-abiding American citizens.

The rally was designed to take back the Fourth Amendment from the shady Big Brother tactics of the U.S. intelligence monster. 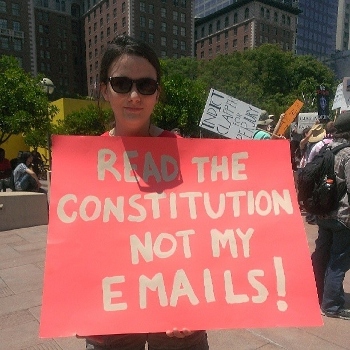 As bleak as things may seem, we have the power to take down this dystopian existence before it gets even more heinous.

1984 Day organizers gave two simple reasons for “Why We Must Rally”:

Recent revelations about the NSA's surveillance infrastructure provide concrete evidence that phone and email records of U.S. and foreign nationals are being collected and stored by the government.

We demand that our government protect our right to privacy with respect to data from our digital communications devices. This includes metadata as well as our communications.

Privacy is not simply a privilege; it is a necessary precondition for a free and democratic society.

In the words of Benjamin Franklin, “Those who would give up essential Liberty, to purchase a little temporary Safety, deserve neither Liberty nor Safety.”

Whistleblower and NSA contractor Edward Snowden's leaks have shined a light on the sheer magnitude of the surveillance state.

In a painfully ironic move, Russia — the very totalitarian country that inspired 1984! — has given Edward Snowden asylum. That alone should make us ashamed at how far this country has fallen.

The Orwellian PRISM that Snowden unveiled can sweep every phone call you make, every website you visit, each keystroke you type...

It is the widest-reaching surveillance program the world has ever seen — so big, in fact, that the NSA is building the largest data center in the world in Utah. The $2 billion facility will have about a million square feet of storage space capable of storing 5 zettabytes of data.

(To put that in perspective, one zettabyte is the equivalent of about 62 billion stacked iPhones 5s, or enough to stretch from Earth to the moon.)

The silver lining in all of this is that people are waking up to the fact that the massive surveillance state is not necessarily permanent — and if enough people stand up against it, we can deal it a crushing blow and take back our privacy and our dignity.

Some politicians are finally pulling their heads out of their asses, realizing law-abiding citizens do not want their every action spied on. (Imagine that!)

There is already legislation that seeks to neuter some of the programs most heinous provisions.

Rep. Justin Amash of Michigan put forth an amendment last month that would have at least ended the collection of citizens' computer metadata without a warrant.

The amendment was voted down, but not by much. It only lost by 12 votes, 205-217: 134 Republicans voted against it and 94 voted in favor, and the Democrats were actually closer, with only 83 voting against and 111 voting for.

As Restore the Fourth points out, while it was a blow to privacy rights, it was encouraging that the vote was as close as it was.

The 2011 vote to extend the PATRIOT ACT (which pretty much gave the intelligence community carte blanche to enact PRISM and other spying programs) was passed easily with a margin of 250-153.

So progress has been made...

And if enough pressure is put on our national and local lawmakers, we may be able to chip away at the prying eyes of Big Brother.

If you've had enough of your own privacy being invaded, you can join the movement.

The Electronic Frontier Foundation has set up a page that will allow you to send a message to your local Congressperson expressing the fact that you won't put up with Big Brother breathing down your neck.

The more hell you raise, the stronger we get our point across.

Click here to download a form letter that you can mail to your state representative or senator.

Hit them from all angles.

The Outsiders are coming out of the woodwork to fight against the dystopian future that Orwell warned about all those years ago...

Let's get this boot off of our face once and for all.