Guess Who Is Buying Up Tons Of Gold?

While all eyes are on the U.S. and China negotiating a trade deal, it's become apparent that China has been busy making some other deals.

China has been on a gold-buying spree, evident from a large expansion of its gold reserves for the fourth month in a row.

At this rate, China may outpace Russia as the biggest gold buyer after Russia added 274 tons to its reserves last year.

This comes after a hiatus a couple years ago, but is part of a much larger trend. Central banks are buying more gold in recent years than they have in a long time.

From the data collected by the World Gold Council, it appears central banks bought more bullion last year than any time since 1971, when the Nixon Shock ended the gold standard.

In total, governments added 651.5 tons of gold in 2018, a 74% increase year over year. Another 600 tons are expected to be purchased by central banks this year, according to Metals Focus Ltd.

While this trend has accelerated rapidly over the last several years, it has been in place for close to a decade now: 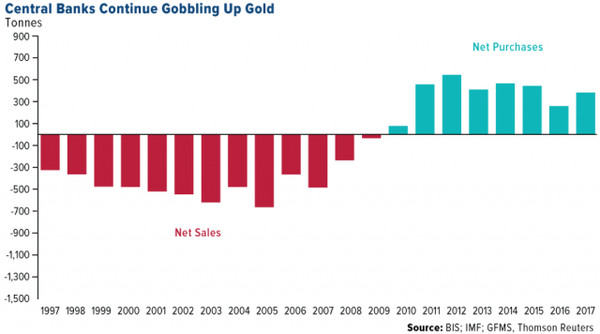 So what gives? Why ramp it up now?

The U.S. dollar has stayed strong while the government behind it — for better and worse — has become far more willing to play hardball with sanctions.

Meanwhile, gold has stayed relatively cheap, and historically cheap compared to virtually all other easily stored and traded assets.

Look no further than countries like Venezuela for reasons why a hefty stockpile of bullion is useful when countries are limited in access to the U.S. dollar to settle international business. It is trying to sell $400 million of gold to stay afloat, and it is easily finding buyers in other central banks.

Russia and China certainly see that as the worst-case scenario. And they know that the longer sanctions and trade wars play out, the more important diversified reserves are in weakening the hegemony of the U.S. dollar in international trade.

But other than that specific geopolitical aspect, all reasons are the same for central banks and individuals alike.

The global economy is showing signs of slowing down, and rotating away from placing all of our eggs in the economic and market expansion basket is a good idea.

Government debt is soaring and U.S. dollar reserves, while stable now, expose us to the long-term threat of devaluation.

According to the Institute of International Finance, total world debt is near $250 trillion, or 320% of GDP through 2018.

Non-financial corporate debt went over $72 trillion last year, now near an all-time high of 92% of GDP.

The bill is coming due sooner than later and all signs point to a significantly weaker ability to pay up.

U.S. stocks are near all-time highs as this year promises weaker earnings and sluggish economic growth.

In fact, this is the first quarter in about a decade where U.S. companies will report lower profits on higher revenue. Costs are up and earnings are expected to fall 2.5% year over year.

Then there are really dumb things that could happen. First on the list is that U.S. political brinksmanship could easily shut down the government and prevent the Treasury Dept. from issuing new debt as bonds in just a couple months.

So U.S. stocks are basically at all-time highs, the dollar is strong, government and corporate debt are out of control, and we're looking at a bearish economic cycle that will stress the entire system.

It is simply a great time to sell high and move some of our wealth out of overly expensive stocks and away from being purely dependent on the U.S. dollar.

It is also a great time to buy low and get into some of the best gold investments in the world to keep building our wealth while bonds and stocks go flat or pull back.

Sometimes it is as simple as that — though the particulars may change — for all investors, from central banks to mom-and-pop investors to everyone in between.

This Is What Will Trigger The Next Gold Bull Market
Outsider Club editor Gerardo Del Real tells readers why they can expect Dow 30,000, expect low interest rates, expect volatility from overseas to drive the dollar higher, and in the second half of this year expect a gold rally...
The New Gold Bull Market
Gold has been asleep at the wheel for seven or eight years. It's about to wake up and make up for lost time. This is the storm that could take gold to $5,000...
“Historic GOLD SPIKE Ahead!”
Looming global events are creating an economic “Perfect Storm” — and for only the fourth time since 1896, Mr. Dines has discovered a proven indicator that points to a roaring bull market in gold. He’ll share that with you in a moment, for the first time ever!
Heal Your Ailing Portfolio Body