Greed isn't a bad thing on its own. However, it doesn't exist in a vacuum.

It is great when greed is paired with something virtuous — be it a nebulous idea, such as innovation or efficiency, or something that even seems more counter-intuitive — like saving your customers money.

The last one may seem counter-intuitive, but look at passive ETFs. They save clients money compared to actively managed funds, and generate better returns over long periods of time.

Make no mistake though, those that create these investment tools are making a profit. They just found a virtuous combination that they, and us, can exploit.

Problems only come when greed is paired with vice. That brings us to the heart of a matter we all deal with today. The costly and deplorable intersection of greed and complacency in the tech sector.

Let's take a look at how this is happening in the sector that is the held up as the paragon of “disruption,” then see how an unlikely combination is finally offering us a way out.

No greater example of greed and complacency can be found outside of this map. Comcast and Time Warner tried to merge, arguing that they did not compete with each other, and only public outcry outweighed corporate pressure: 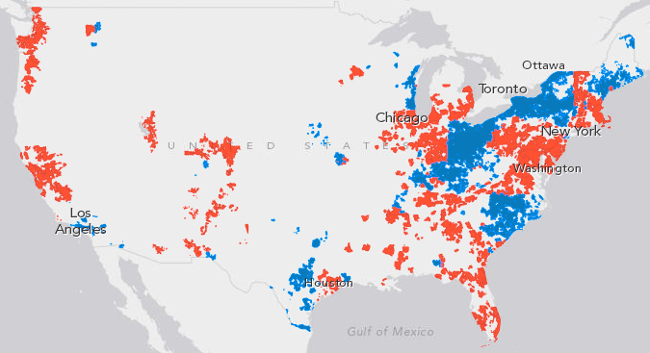 They're right, technically, but for all the wrong reasons. They created regional monopolies where competition was impossible.

Prices are fixed, infrastructure is static, and consumers are trapped.

Cable providers have colluded and exploited us to the point where they have no reason to compete. As a result, the data we use has become prohibitively expensive:

This gap between service and compensation is artificial. As a result, the U.S.A. is falling behind on connectivity, by any standard; bandwidth, data, or contractual price.

The systems that have been allowed to languish have also allowed internet providers to consistently charge more without providing greater services for over a decade.

All it would take to break this is any form of competition. Until now, there has been no silver bullet, but a new solution has come from a hybrid approach.

Google Fiber, a division of the largest tech company out there right now, isn't even trying to compete with the major cable providers. However, it does want to break the status quo, if only to unshackle data consumption, and has reduced prices for tens of millions while exponentially boosting bandwidth.

Just look at how it is expanding across major cities right now: 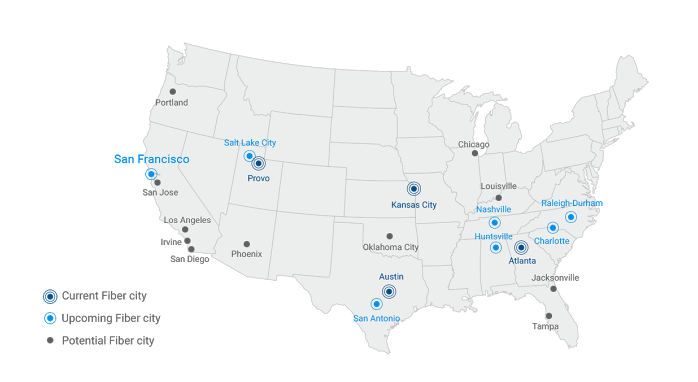 Wiring entire cities is a top-down approach though. The connections between individual houses — the “last mile” as it is called by technicians and engineers — remains a problem.

This is where some of the smallest tech companies are carving a niche.

The need to pay subcontractors to carve a deep groove across a property and rack up large bills is gone, because the best companies can run new data lines in minutes without tearing up the ground.

They don't even splice lines, which dramatically reduces connection speeds for consumers.

This “last mile” installation typically costs $560 per meter. Nick has uncovered a company that can do it for $90 or less per meter — five times cheaper than existing methods.

This company isn't limited to its work with Google though. It has worked with Verizon in New York, Massachusetts, and Virginia.

It's also doing work in Europe for a unit of Iberdrola Utilities — one of the biggest utility companies in the world.

Then there are the deals with universities: Stanford and Johns Hopkins University stand out. Also, the Winter Olympics in Vancouver and the Dept. of Homeland Security.

Nick has been recommending this company to readers of Early Advantage. And they've already doubled their money.

However, this is just a start. The company has a market cap under $50 million in a market where upgrading this infrastructure will be worth $185 billion per year in 2018 in the U.S.A. alone.

Greed and complacency have existed until now, but the tide is turning, and cable companies aren't as safe as they have been. At last, a vice is being replaced by a virtue.