Gold: "The Most Confusing Commodity"

In an interview with Kitco earlier this week, John LaForge, head of real asset strategy for Wells Fargo Investment Institute, called gold’s price movement over the past year and a half "the most confusing of all the commodities."

It might seem a bit discrediting for a financial analyst to admit that they’re confused about a market. But there isn’t an investor worth his salt who doesn’t expect for markets to sometimes act irrationally. We expect to be confused sometimes.

Yet when assets abandon long-established habits for months or years at a time, more consideration is due. Such is the case with gold.

It’s important to note that over the past 20 years, the factors that drive gold prices have indeed changed.

In the years that followed 9/11, for example, gold would respond positively to civil unrest, terrorist acts, and other geopolitically shaking events.

But that’s not so much the case any longer.

A great example is the recent Russian-Ukraine war. Gold prices responded somewhat positively immediately after the Russian invasion. Yet today the price of gold is lower than before Putin invaded — and now there are still threats of nuclear war. If Russia had pulled the same stunt in 2002 or 2003, gold prices would have likely gone soaring.

A better example of how gold responds less to geopolitical threats is the Capital riot. The United States Capitol building — the most sacred temple of American democracy — was ransacked by rioters, and gold completely ignored the event. Here’s what gold was doing on the day of the riot: 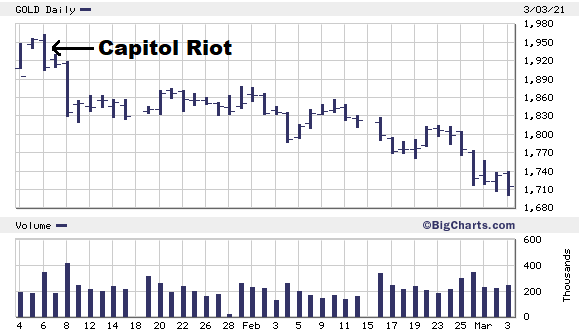 Or consider any of the other riots and protests that just took place a few years ago in cities across the nation. Gold completely ignored all that too.

But that’s not what’s confusing LaForge, or any gold bug, right now.

Gold has a long-established habit of reacting positively to interest rates and unfavorable economic/stock market conditions like inflation. But as LaForge said to Kitco, “[Gold] doesn't seem to want to react to anything outside the U.S. dollar and that's been going on for a solid year and a half… The bad news is bad news and the good news is bad news. It doesn't seem to matter.”

Gold prices have been ignoring rising inflation, shrinking GDPs, and threats of stagflation. And instead mostly reacting to the U.S. dollar… sort of.

Gold is actually not reacting to the exact “value” of the U.S. dollar.

Instead, it’s reacting to the value of the USD Index.

The USD Index is a basket of six major world currencies — and more than half of that basket is made up of the euro.

In other words, gold is mostly reacting to the relationship between the greenback and euro, and a handful of other major currencies, as measured by the USD Index.

And the USD Index is at multi-year highs as the world’s central banks continue to pursue very aggressive monetary policies.

A strong USD Index makes the U.S. dollar seem very strong. But it doesn’t provide a full picture of the dollar’s value.

The truth is for U.S. consumers like you and me, the value of our dollars are actually declining as inflation continues to ramp up. Energy, food, housing… everything costs much more, making our dollars much less valuable.

But I’ll leave you this week with something to consider. Take a look at this MarketWatch article from 2009: 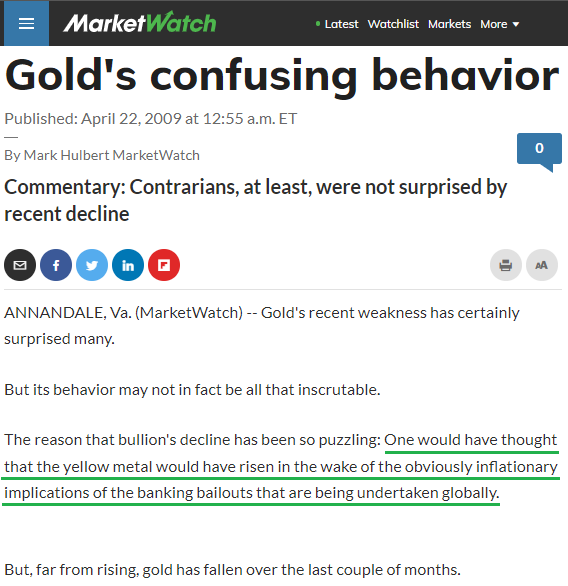 Change “banking bailouts” to “COVID relief” and that could have been written yesterday.

That article was published April 22, 2009. Several months later, gold would go on to smash all-time price records in what became the biggest bull market for gold since the late 1970s.