Gold: Hold Out for Both Marshmallows

Gold prices fell over the last couple days and today in particular.

If you search for gold news right now it is all you’ll find. Headlines about a bursting bubble or correction are all over.

Correction? That's a pretty broad term to toss around considering it doesn't account for the "why" of it all,  but sure, if you want to call it that then go ahead.

Bubble? Certainly not. It isn’t even close. That's clickbait material.

The simple fact is that what is happening is the product of a strong gold sector right now, and it is easy to see why.

It’s hard to imagine, but just under five months ago gold was sitting at $1,564 per ounce after the rapid and broad market drop,

Since then it has mostly been a straight climb with a couple bumps. Then came a rapid bull run from around $1,850 per ounce last month that added $200 to the price. 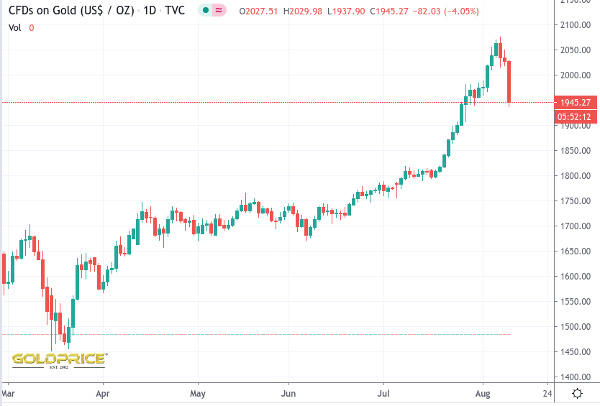 Now here we are today sitting on close to a 23% gain from mid-March. What have we lost? For perspective, it's about two weeks of gains on paper.

Sure, we’ve done some selling around here, but not much. Our two gold-focused experts have cashed in on some positions.

Gerardo del Real and his Junior Mining Trader readers collected 145% at the end of July and Nick Hodge and his Wall Street’s Underground Profits readers banked 254% in June.

While we certainly aren’t big enough to push prices, this gets to the heart of what is going on right now.

People are selling to get a quick buck and I can’t blame them. It isn't a bad idea. The whole point is to sell sometime after all. However, for most positions, now is not the time.

The simple fact of the matter is that gold is hot and the selling we’re seeing isn’t being driven by any significant changes in the market. It is just the people who jumped on board to get a quick and easy buck from a surefire trend that are taking their money off the table.

The bullish gold trend is simply too strong right now to NOT attract some of this behavior.

None of the fundamentals that we’ve been discussing here at the Outsider Club have changed. In fact, they are only getting more entrenched.

The economy is only getting worse after “historic” gains in jobs and other headline metrics failed to recoup half of what was lost. Plus we already know that recovery is dying right now.

We’re certainly not above grabbing some gains while we can, but all of this selling brings to mind a classic experiment.

Here is the "Stanford marshmallow experiment" in a nutshell. Give a child a marshmallow. Tell them they’ll get a second in five minutes if they don’t eat the first and then leave the room.

Some will eat the first and have to deal with not getting the second. The rest will get more in the end.

Over time, the experiment showed something more profound. The kids who could hold out for the greater reward later had far better life outcomes, across a broad range, from career and family success to physical and mental health that depends on resisting instant gratification.

This is what we’re seeing now. Some people are eating one marshmallow right away and losing out on the doubling effect from delayed gratification.

This is your choice to make, of course, but all the evidence points to it being shortsighted.

For your sake, I hope you make the right choice. We’re in it for the long haul around here because all evidence points to a much stronger bull run in gold prices over the weeks, months, and potentially years to come.

A little bit of profit-taking from others won’t hurt us. If anything, we’ll just get more shares of the best gold stocks for a bit less.

I'm perfectly happy to do that.