The price of gold experienced a bit of a flash crash on Monday morning due to a combination of factors including liquidity issues and strength of the U.S. dollar. 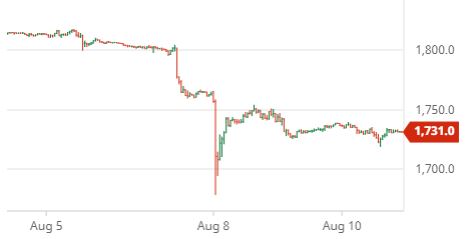 The price of gold has recovered a bit since Monday's event. But the crash has had lasting effects, leaving the yellow metal quite oversold, and providing a good opportunity to buy. To explain, let's take a look at what caused the whole thing. It all started last Friday...

They also reported U.S. unemployment fell to 5.4%, down from 5.9% in June, and that American wages grew more than expected in July.

The upbeat data caused a rally in U.S. equity markets, with stocks reaching record highs last Friday, and a significant boost to the U.S. dollar. The greenback jumped 0.25% in a matter of minutes following the Labor Department's NFP announcement. 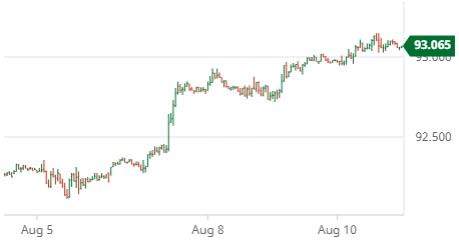 Responding to record highs in stocks and a jump in the dollar, gold heavily sold off, falling to around $1,760 an ounce.

And under normal circumstances the story would have ended there. But Friday was not a normal trading day for gold.

That's because public holidays closed markets on Friday in both Japan and Singapore, two of the main trading hubs for gold in the region. Closed markets created liquidity issues, which exacerbated gold's sell-off.

Then, on Monday morning, Asian markets opened back up and traders were finally able to react to Friday’s positive NFP report and rising equity prices. This caused gold to fall even more and, no doubt, triggered algorithmic trading software to sell, further aggravating the yellow metal.

It was a right-left-right combination knock down for gold that left prices below $1,725 an ounce. 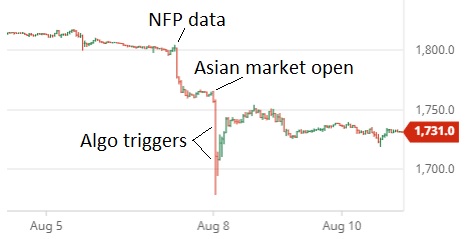 Gold was knocked down. But it's not down for the count. Because now the market has to deal with inflation figures.

The BLS released CPI data this morning at 8:30 a.m. EST. And inflation levels were expected to remain very elevated.

Economists in a Bloomberg survey said they expected a 5.3% annual increase to core CPI in July. This would be down a bit from the 5.4% increase clocked in June — but still some of the highest levels of inflation America has seen in over 10 years. And that's bullish for gold.

Now, it's important to note that gold and inflation actually have a more complicated relationship than most people realize. The fact is gold prices and inflation rates aren't exactly inverse. And there's decades of proof.

For example, according to analysis by Morningstar portfolio strategist Amy Arnott, the annual inflation rate in the U.S. between 1980 and 1984 was about 6.5%. Yet during that time, the price of gold lost about 10%.

There have been times where gold has increased during times of higher inflation. But gold's track record in elevated inflation environments is mixed, at best.

However, the price of gold does tend to increase when investors believe inflation is heading higher in the future.

In other words, current inflation data doesn't drive the demand for gold, but instead it's the fear of future inflation that prompts gold buyers.

And, really, that should be self-evident logic for any investor: Buy for the future, not for the present. But there is, no doubt, a false belief that gold prices always increase during times of higher inflation.

Nevertheless, I believe fears of higher inflation will increase as long as today's CPI data doesn't come in far below expectations. Two months of sustained +5% inflation should be enough to dominate financial headlines for the rest of the week — and enough to reignite interest in gold as a hedge.

For buyers now, though, buying physical gold bullion is expensive.

Physical gold bullion almost always sells at retail with a small premium over COMEX prices. For a gold bullion coin like the American Gold Eagle, investors should expect to pay around 5% over COMEX prices. But now a surging demand for bullion has pushed gold premiums once again to near-record highs. Investors today are paying an 8–10% premium for Gold Eagles, and some are paying even more.

The best way to get exposure to gold right now is via gold stocks — specifically shares of companies that explore for gold, construct and develop gold projects, and physically mine and process gold products.

I've recently put together a new report that details five small gold exploration companies that are well-positioned to take advantage of a major gold rush unfolding in Canada's Newfoundland.

You may have already heard about this gold rush in the news. A company named New Found Gold made a major gold discovery a few months ago and now everyone and their brother wants a property nearby.

There are today about two dozen public companies with significantly sized projects surrounding Queensway. And over the past several weeks I've slogged through every single one to cherry-pick five companies that are best positioned for repeated success.

I've put my findings in a new report published just a few days ago. For more details on how to access this report for free, which gives the names and stock symbols of these five gold explorers, simply click here.