The gold rush is on, and it's pulling everyone in...

Warren Buffett has perhaps the worst diet of anyone I've ever seen...

He's almost monk-like in his dedication to cheeseburgers, ice cream, and candy, while washing it down with enough Coke to kill a small rodent. The Oracle of Omaha isn't shy about it: he's been quoted that he eats like a child.

"I checked the actuarial tables, and the lowest death rate is among 6-year-olds, so I decided to eat like a 6-year-old," Buffett once quipped. "It's the safest course I can take."

He even bases his McDonald's breakfast on the opening of the stock market: if it's down, he orders two sausage patties. If it's up, he splurges on a bacon, egg, and cheese biscuit.

To his credit, he does put his money where his mouth is: Berkshire Hathaway has massive holdings in Coca-Cola, See's Candies, and Dairy Queen. But that sweet tooth has turned a bit sour these days, and Uncle Warren decided it was finally time to treat himself to some gold fillings for those Coke cavities...

That's right, the notoriously anti-gold Buffett finally reversed course and dumped millions of Berkshire dollars into gold. The financial media has gone wild with shock and every major outlet has had at least one headline that essentially screamed: Holy Shit, Buffett Bought Gold!

After years of mocking precious metals and completely ignoring them in the Berkshire Hathaway portfolio, Uncle Warren has done a serious 180 and dropped $560 million to buy over 20 million shares in Barrick Gold (GOLD) — the second-largest gold company in the world.

Not only did he make that market-moving trade, but he also dumped shares of JPMorgan and Wells Fargo...

The move wasn't lost on Wall Street, and shares of GOLD quickly jumped over 8% in after-market trading following the announcement. The Buffett effect was made even stronger based on his long history of not only avoiding gold investments, but actively mocking them.

Here's a quick "greatest hits" of Buffett's gold trash talking. The one being trotted out most recently is:

Gold gets dug out of the ground in Africa, or someplace. Then we melt it down, dig another hole, bury it again and pay people to stand around guarding it. It has no utility.

Anyone watching from Mars would be scratching their head.

We all get the point: gold doesn't pay dividends, it doesn't compound itself and yes, it has very little use outside of industrial purposes. But, I think if Martians were looking down at the current market, they wouldn't be scratching their enlarged green heads about gold so much as the rising stock market in the face of so many red flags.

To wit, here's another Buffett nugget:

What motivates most gold purchasers is their belief that the ranks of the fearful will grow.

Personally, I don't see a clear path to a fearless stock market over the next year. We have over 30 million unemployed Americans. We have a runaway Federal Reserve dumping trillions into the economy — devaluing the dollar and adding a historical amount to the national debt.

In fact, the government will borrow more this year than it raises through taxes. The last time that happened? The last year of World War II.

Regardless of who becomes "King" next year, all of his horses and all of his men will not be able to put that together again...

Just look at the difference between Barrick and Coca-Cola this year: 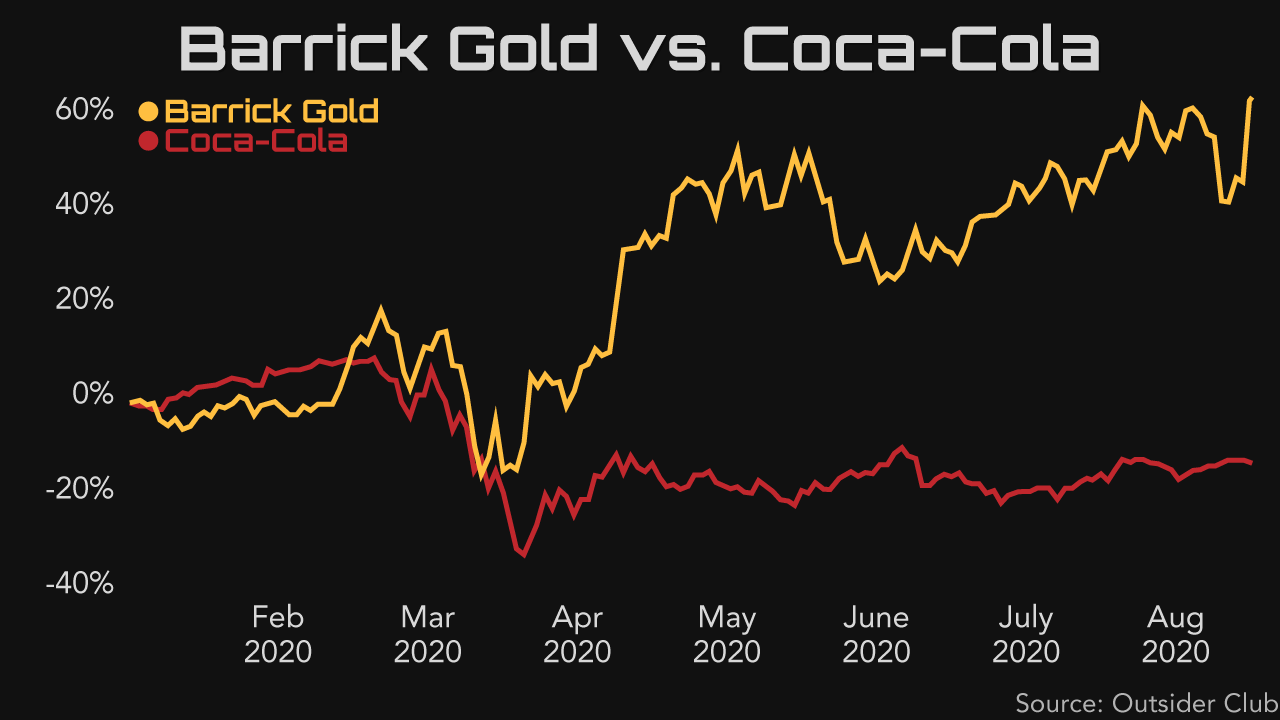 GOLD is up 62% while Coca-Cola is down 16%. Certainly somebody at Berkshire foresaw this chart and spent months getting through to Mr. Buffett, forcing him to face the facts.

I feel for Mr. Buffett, because I myself am a “buy-and-hold” kind of investor. Like Warren, the bulk of my portfolio is made up of companies that I know and use, and that pay a dividend (unlike Warren, however, I eat vegetables and don't drink soda for breakfast).

But I'm guilty of ignoring warnings for years about buying the same gold stocks that are exploding right now. Those warnings were usually coming from Nick Hodge.

When I finally came around, I asked Nick the single-best way to play an upcoming gold bull market.

He gave me three tickers — all of which are now in heavy double digits — but one of them stood out the most. It's a company that is quietly building up the largest gold mine in America, and has the backing of billionaire hedge fund manager John Paulson.

You see, Buffett isn't the only billionaire who has been adding to his gold reserves. John Paulson bought a stake in Barrick years ago — beating Buffett to the party and drinking from the punch bowl while Buffett was getting sick on Coke.

Now the entire world knows that Buffett and company are piling into Barrick, but what they don't know is there is a much smaller, under-the-radar company that not only has Barrick's backing — it has yet to make any major headlines.

John Paulson just dumped another $35 million of his own money into it...

Buying this gold company is like jumping to the front of the Buffett buffet line instead of settling for his table scraps.

This company won't stay underground for long, so get in before the next billionaire sends prices soaring again.