Gold Crushed It Last Month. It's About to Get Even Better.

We've been warning for a long time that you should beat the herd with gold and I certainly hope you took it to heart.

We just saw a huge month in multiple ways that shows that the blind optimism of the dead-and-gone stock market bull run is finally fading into realism.

Investors piled into the largest ETF in the market that is backed by physical gold, creating the highest number of shares outstanding since 2013.

Finally, the MSM is catching on to what we've been saying for months now.

CNBC recently had Jason Bloom, director of global macro ETF strategy at Invesco, on its “ETF Edge” program, where he stated:

“You’ve actually got a decrease in the supply of gold while the demand is going up, and it’s pretty unusual to see the actual production of gold be influenced while prices are rising, so, you’ve got a double whammy there.”

That's not news to our readers who have been hearing about that for a solid six months already, following the start of gold's bull run.

The pandemic is only dumping fuel on a fire that has been raging for a while now.

Mr. Bloom went on to point out that Wall Street price targets for gold are finally recognizing what has been obvious, with many coming in the $2,000 to $3,000 range now, before stating:

“I haven’t seen that before. It does remind me a little bit of the spike in gold we saw following the ’08-’09 financial crisis and the stimulus that was enacted then. I guess this time it will be interesting to see: are people buying gold because of inflation fears? Obviously, the inflation didn’t pan out and we saw a huge retracement.”

Yes, inflation — or should I say currency devaluation — is always a driver for gold prices. The last 10 or so years have certainly proven that central banks can engineer low interest rates at the expense of ballooning balance sheets.

Most estimates put the total after the pandemic at $9 trillion on the Fed's books. As with most estimates so far, those are seeming increasingly conservative and optimistic.

U.S. corporate debt stands at about $32 billion with the strong possibility of the Fed moving into purchases of private debt. We're looking at a central bank with a strong appetite to charge into corporate bond purchases and dramatically expand the ballooning balance sheet further.

U.S. government debt is at around $24 trillion and will see an unprecedented expansion. The U.S. Treasury just announced it will have to borrow $3 trillion in just three months to start.

It is true that inflation is a concern but I don't think anyone is looking at that as a short- or mid-term issue. The U.S. will be the last domino to fall to runaway inflation as long as no other economy and government combo can step up as the new safe haven or last resort. That argument is very valid for long-term outlooks and we'll just have to wait and see.

Right now just about everything else is flashing a buy signal though.

Any measure of economic production or health you can name is in freefall.

Stocks are at all-time highs compared to forward-looking earnings estimates.

It is almost a given that the EU will enact emergency measures that would allow the ECB to directly finance national debts.

Imagine how long Germany will want to finance Italy when that happens? The EU nearly shattered in the fallout from the Great Recession, and we're already well past that in terms of the transfer of wealth.

That is just geopolitical strains among friends. U.S. relations with China are abysmal and growing worse.

Make no mistake about it, gold is going to a new high in the next couple months.

Sorry, that's wrong. Gold is already at all-time highs now in most currencies.

It's just in U.S. dollar terms that it hasn't happened quite yet. With everything going on — demand spiking, supply dwindling, endless disruption, and global QE Infinity — how much longer do you think that will last?

A fantastic opportunity is here, and I hope you won't follow the herd into GLD. ETFs have their uses but it is only the easiest play, not the smartest.

As Gerardo Del Real pointed out yesterday, the relative value of gold stocks versus bullion is the cheapest it has ever been: 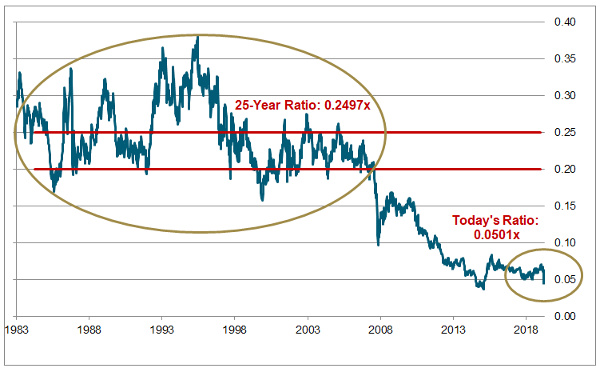 Get into gold, but do it the right way. Let Gerardo show you how.