Give Your Money to Someone Else

I first met Rudolph on the day before Thanksgiving, three years ago.

He was dressed in a tattered Army jacket and was begging for change outside of our Baltimore office.

Rudolph had an honest face, a calm demeanor, and a desperate look in his eyes that was pleading for help.

I introduced myself — as I typically do with homeless people to varying results — and Rudolph greeted me graciously. He explained that he was an Army veteran who was dealing with PTSD and was currently living in a tent under the I-83 bridge.

I know the “tent city” well. It’s but a stone’s throw from where I wrote this article. It hosts several dozen tents and a community of homeless who simply have nowhere else to go. During the winter, our shelters are overrun and understaffed, and there are frankly not too many places to find food and comfort in Baltimore. 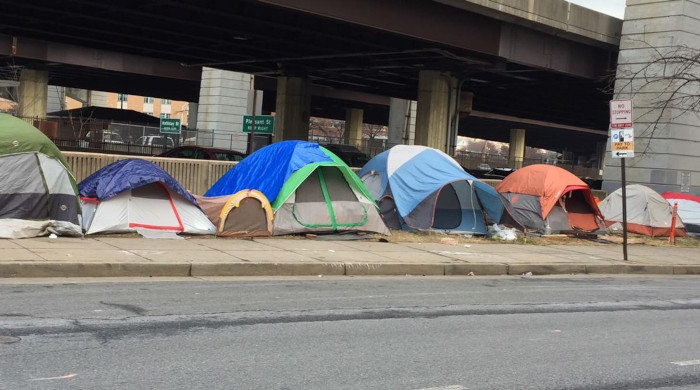 I took Rudolph to the local soup shop and ordered us lunch. If memory serves, he ordered broccoli and cheddar soup, because he “hadn’t been able to eat enough vegetables lately”.

While sopping up that soup with crusty bread and hot tea, he told me his story…

After leaving the Army, Rudolph tried his best to find odd jobs. He worked in restaurants, hospitals, and even office buildings like mine, where he did janitorial work. But the mental health issues he had after returning from Afghanistan continued to haunt him wherever he went. Rudolph had trouble focusing for long periods of time. The horrors that he experienced in war zones led him to self-medicate with drugs and alcohol.

He lost all of those jobs for obvious reasons.

But his employment death knell came when he got a job at the Laurel horse racing track in Maryland. Rudolph was working hard — taking out trash, scrubbing bathrooms, and doing, as he put it, everything that most people simply didn’t want to do. Then a shady coworker came to him with an easy way to bank some quick cash: sell some marijuana to a cohort of regulars at the track.

It seemed like an easy decision. Why waste the whole day cleaning up piss in bathrooms when he could make an easy buck handing off a bag of weed to some old gambler? The plot worked for a few weeks, but eventually the hustle caught up to him.

He sold a few joints to an undercover cop and was sent to jail.

Rudolph's criminal record for distribution of drugs kept him from finding a job. The drug war has made millions of citizens persona-non-grata when it comes to finding jobs. That was why he was living in a tent and begging for money. He simply didn’t know what else to do.

Millions of Americans find themselves in the same position. Whether it’s PTSD, substance abuse, or serious mental illness, untold numbers of people will find themselves cold, alone, and scared this year.

Charity is a touchy subject. I think most of us go through an analysis paralysis when we start looking at the best places to donate our hard-earned money.

It’s not political, it’s not religious — it’s just the right thing to do. If we’re doing well enough to feed our family and put a roof over our heads, I think we should be making sure that nobody goes hungry. Let’s get folks a hot meal at the very least.

While there are certainly charities that spend far too much money attracting high-paid CEOs and burning money on cringe-worthy infomercials, there are plenty of charities that are effective in putting your goodwill to work and actually serving the most vulnerable people around us.

This charity helps prevent and treat under-nutrition around the world — especially after disasters and conflicts.

It's been doing this for over 40 years in areas of the world where hunger is most severe. It raises awareness about hunger, clean water, and pretty much anything that needs tending to when it comes to saving people's lives.

Just think about this:

They do great work. One way I decide which charities to invest in is seeing how they use the dollars that they are given. Action Against Hunger does it right. It spends $3 to raise $100, which earned an A+ from Charity Watch.

You can donate here.

The National Alliance to End Homelessness

We know that ending homelessness is an impossible task. But this charity is doing all it can to help cut down the number of people — like Rudolph — who have no choice but to live on the streets.

Rapid re-housing is also less expensive than other homeless interventions, such as shelter or transitional housing.

It is offered without preconditions, which is crucial since most homeless people have very good reasons as to why they are homeless in the first place — mental health and addiction, for starters.

On any given night last year, an estimated:

The National Alliance to End Homelessness spends $4 dollars to raise $100 — earning another A+ from Charity Watch.

A worthy cause, to be sure. You can donate here.

I ran into Rudolph a few months ago. He had gotten clean and was working as a dishwasher at a local soup shop — not far from where we had our meal. I’m not at all trying to pat myself on the back here, but he told me that just the act of taking him to lunch that day made him reexamine his situation. I got him in touch with a pro-bono lawyer who got his marijuana charge expunged. Rudolph was free to apply for jobs without the burden of a drug charge.

He ran up to me and greeted me by name. I felt like I was running into an old friend.

I noticed that he was walking tall that day, feeling confident and was nothing like the man I had met years before. Sometimes all it takes is a simple act of kindness to bring out the best of all of us.

So do what you can this Thanksgiving. If you’re doing well, pass that along to those who really need it. If you aren’t, then don’t feel ashamed to ask for help.

In a year like this, we all need help. Have a blessed holiday season.