If there’s one good thing to be said about the G-7, it’s that it's consistent.

Too bad it’s that it's consistently useless.

On Sunday, members of the G-7 decided they’d waste some time by banning imports of gold from Russia.

And U.S. Secretary of State Antony Blinken said on CNN that gold, “is the second-most lucrative export that Russia has after energy — it’s about $19 billion a year — and most of that is within the G-7 countries. So cutting that off, denying access to about $19 billion of revenues a year, that’s significant.”

So let’s break this down.

First of all, Blinken is correct that Russia exported about $19 billion worth of gold last year. And that $19 billion is a significant amount of money… to most people.

But $19 billion is no money at all relative to the Russian economy.

The total value of Russian exports last year is estimated to be about $275 billion. That’s down from about $330 billion in 2020. So $19 billion in gold exports is a drop in the bucket relative to the country’s total exports.

Moreover, the G-7 consists of Canada, France, Germany, Italy, Japan, the U.K., and the U.S. — seven countries. That’s it. There are more than 180 other nations that aren’t part of this ban. And the G-7 nations really aren’t the biggest importers of gold to begin with. 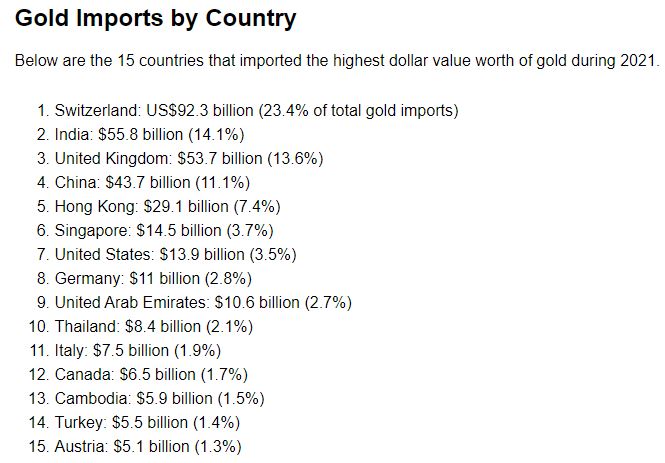 So what’s this all about?

Well, it turns out that Russia’s gold exports are mostly specific to one single country: the United Kingdom.

For American and American investors, the ban on Russian gold imports virtually means nothing at all. That’s simply because the United States doesn’t really import gold from Russia.

According to the World Gold Council, Russia is the world’s second-largest gold producer by volume. Last year, the Russian Federation exported about $17 billion worth of gold, making it the world’s fourth-largest exporter. Of that $17 billion, it’s estimated the U.S. only imported $11,000 worth of Russian gold — that’s about 0.00006%, if you were counting.

The bulk of Russia’s gold exports goes to the U.K.

The details of the new gold import ban aren’t very clear, which is no surprise. The G-7 is not known for its clarity and transparency. But I think it’s pretty clear the ban has something to do with preventing high-net-worth government sympathizers and high-level Russian officials from using gold to launder money and skirt financial sanctions already established by way of the United Kingdom and Switzerland.

Two days prior to the G-7’s announcement on Russia’s gold ban, Bloomberg reported the Swiss Federal Customs Administration was tracking more than 3 metric tons of Russian gold, worth more than $200 million, that entered the country through the U.K.

The media outlet reported Swiss refiners “can still legally import gold from Russia, according to the customs administration, though most have said they won’t” because “Russian gold has become taboo in the West following the country’s invasion of Ukraine.”

Nevertheless Bloomberg said, “The industry has been abuzz with speculation about the trade, especially after the association of Swiss refiners said its members hadn’t imported the metal.”

I think it’s pretty clear the G-7 had this investigation in mind when deciding on the Russian gold ban.

It’s worth noting that in the past 15 years, Russia has been adding to its gold reserves faster than any other country on Earth. Since 2006, Russian gold reserves have increased nearly 500%. 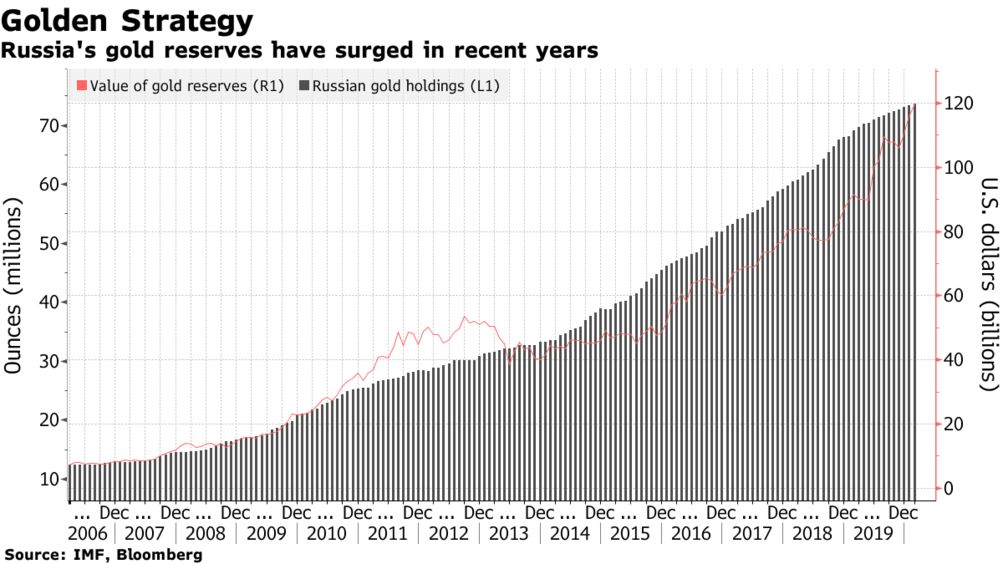 We have to wonder if Russia’s accumulation of its gold reserves has anything to do with what’s happening now.

For the market, the Russian gold ban is a non-event. Gold prices were up slightly following the G-7 news. But it’s more likely gold was following the dollar.