Founding Fathers "Dancing in their Graves"

With the stroke of a pen, President Trump has ushered in a new era of agricultural industry.

After almost a century of being banned in the United States — without any really good reason — hemp will be legal once again. The 2018 Farm Bill called for the legalization of industrial hemp and has been passed by the Senate and House. Trump signed off on it yesterday.

It will be removed from the federal list of controlled substances.

That means that a plant that has been marginalized, ignored, and downright vilified will now be able to contribute to our country’s economy and take us back to our very agrarian origins.

Contrary to popular belief, hemp is NOT marijuana. Hemp and marijuana are both cannabis plants, however, they are different varieties and have very different uses. Hemp doesn't get people high. It is simply a useful plant that could make clothing, food, cosmetics and — most importantly for my investing purposes — cannabidiol (CBD) that will be used in cannabis-based medicine and beverages.

It is that legal distinction and those different qualities that will make investors a nice chunk of change next year...

The country was founded on hemp. Both George Washington and Thomas Jefferson grew the plant.

Jefferson was particularly fond of it and grew it at his home at Monticello and on his plantation at Poplar Forest. He wrote in 1781 about the plant being “useful for fabrication.”

Our oldest navy ship, the USS Constitution, required 120,000 pounds of hemp fiber for the lines, rigging, and sails.

Hemp was even used as a form of currency for some time in my home state of Maryland. In 1619 Virginia passed a law that required farmers to grow the plant, which could then be used as currency not only in Maryland, but Virginia and Pennsylvania as well.

It was so popular and important that citizens could even pay their taxes with hemp.

But then Congress stepped in and ruined the whole party...

In 1937 it passed the Marihuana Tax Act which basically banned hemp production out of fear of its close relative, marijuana. It was Reefer Madness.

But today, we’re looking at the hemp plant — and its close relative marijuana — in an entirely new light…

President Trump said “This is an industrial-use product, medicinally as well as other products, and we look forward to developing markets for it if it’s a profitable crop. Agriculture needs new products.”

It is a profitable crop. As I mentioned, CBD will be a massive new market that — unlike marijuana — will have the opportunity to flourish without the risk of federal crackdowns.

Just look at the sales projections: 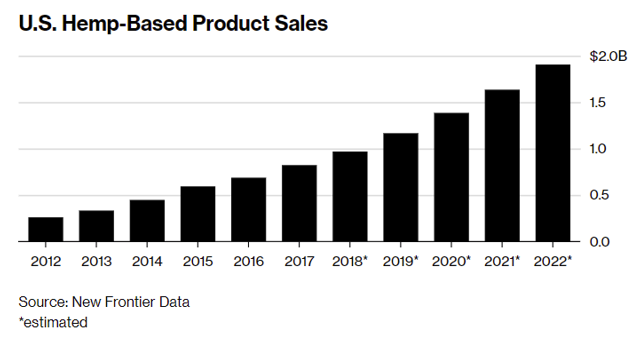 Now, a two-billion-dollar market sounds great, but the Farm Bill could make that figure skyrocket.

Some projections have put CDB ABOVE marijuana in terms of sales. Cannabis analysts at the Brightfield Group have stated that "the hemp-CBD market alone could hit $22 billion by 2022."

That is why you need to take a stake in companies that are prime targets for big buyouts...

Like I told you yesterday, giant, name-brand companies like Coca-Cola, Heineken, and Molson are in the process of pouring billions into cannabis. Other companies will follow and smart investors need to place their bets on which companies are the next ones to get bought out.

The fact that they can now do so without the fear of federal interference means that this process will intensify.

It will be everywhere and — right now — you need to buy into companies that are in prime position to ride this trend.

I have a list of companies for you right here...

The founding fathers would be proud.