Ford Signs Deal to Buy Lithium From U.S. Mine

Last week, Ford announced several plans to source new EV batteries and related minerals, including lithium and nickel, to support the company’s goal of achieving annual production of 600,000 electric vehicles by next year and over 2 million by 2026.

And it didn’t stop there.

The company also announced it was working with multiple mining companies to source nickel and lithium needed to produce the new EV batteries. Ford said it has signed nonbinding memorandums of understanding (MOUs) with:

But there was one agreement that received more attention from the announcement than the others — and that was a binding offtake agreement with a little-known company called ioneer (ASX: INR) or (OTC: GSCCF).

Ford’s press release simply says the company “has signed a binding offtake agreement with Ford for lithium carbonate from ioneer’s Rhyolite Ridge project in Nevada to support EV production beyond 2025.”

Ioneer’s press release goes into a little more detail, saying the company will supply Ford with 7,000 tonnes of lithium carbonate per year over a five-year period beginning in 2025.

Of all the agreements with mining companies, Ford’s deal with ioneer stands out. Several articles have been written about the deal, and it’s the focus of much talk on social media.

One of the main reasons ioneer is getting most of the attention is because it’s the only binding agreement of the bunch. The others are nonbinding.

A July 21st Reuters article pointed out that “the deal is one of the first binding agreements between a U.S. lithium company and [a] U.S. automaker amid rising pressure from Washington to domestically source metals for the green energy transition and curb reliance on China.”

But there’s also this… 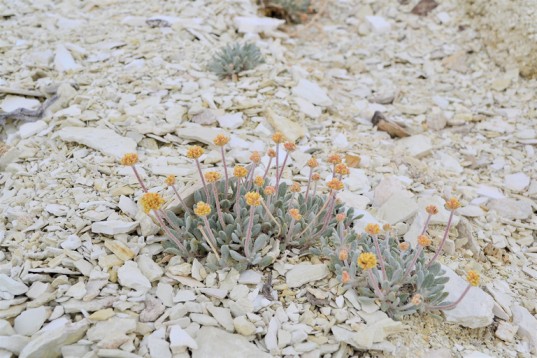 Never heard of it? Well, that’s no surprise because it's an extremely rare plant that’s only known to exist in one small area in far Western Nevada.

According to Allison Melton, a staff attorney at the Center for Biological Diversity, the Tiehm's buckwheat's habitat is restricted to a total of 10 acres spread across two miles in Western Nevada — and it’s right on top on ioneer’s Rhyolite Ridge project.

The Center for Biological Diversity has been fighting with ioneer to protect the Tiehm's buckwheat since 2019 after a whistleblower from the Bureau of Land Management told the center about mineral exploration near the flower’s habitat.

The Center for Biological Diversity, an environmental group, said Ford "needs to rethink this poor decision" to partner with ioneer and should source the metal elsewhere because of concerns about the flower's fate. 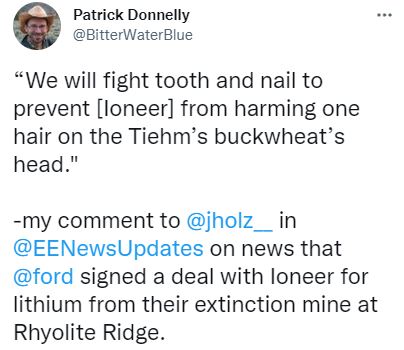 What’s so important about this Tiehm's buckwheat?

I was unable to find any practical uses for the plant, and all questions directed to the Center for Biological Diversity regarding why Tiehm's buckwheat is an important species that should be saved have been ignored. The only thing I can guess is the Center for Biological Diversity is so adamant about protecting this (apparently) useless plant simply because that’s its mandate. I mean, “biological diversity” is right in its name.

There are currently plans to zone off more than 900 acres near the proposed mine site to protect the Tiehm's buckwheat. But it’s very likely that groups like the Center for Biological Diversity will continue to fight off mining at Rhyolite Ridge. So there’s still a chance no one is getting the area’s lithium, binding agreement or not.

But I think we have to make a choice...

Do we want to mine important EV minerals from the largest known lithium deposit in North America? This is expected to:

Or do we want to save this seemingly useless plant?

P.S. I’m sure you’ve noticed the destruction of trillions of dollars in the crypto space recently. People who were speculating that everything crypto would go up are getting killed in the market. But the sell-off has created an opportunity for in-the-know investors who’ve pinpointed a set of coins that are poised to explode off this newly created bottom. You’ve got to see what they uncovered to understand why they’re so bullish.