Flight of the Ostrich, Strength of the Vulture

“Presently I shall take leave of you. By guiding these wings up and down, I should ascend like the birds. If all goes well, after soaring for a time, I should be able to return safely to your side.”

These are the words of Abbas ibn Firnas — the first man in recorded history to actually test a flying machine.

It worked: the 70-year-old astronomer and poet jumped off of the minaret of the Mosque–Cathedral of Córdoba in Spain, using only “a loose cloak stiffened with wooden struts”.

Looks rather majestic, if you ask me... 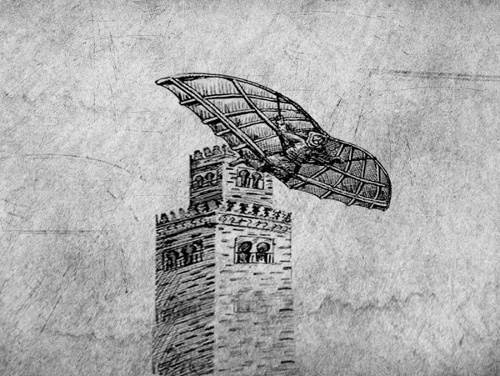 The flight itself was a success — in that he flew at all and didn't immediately swan dive to his death. The landing, however, was less than ideal: ibn Firnas slammed into the ground, wrecked his back, and was lucky to be alive.

According to the Dictionary of Scientific Biography:

"He hadn't taken proper account of the way birds pull up into a stall, and land on their tails. He'd provided neither a tail, nor means for such a maneuver.

He surpassed in velocity the flight of the ostrich, but he neglected to arm his body with the strength of the vulture.”

His groundbreaking (pun intended) mission was so dangerous that he was told he should never attempt it again. He heeded those warnings...

Unfortunately, America's own Boeing (NYSE: BA) did not...

To say it's been a rough year for Boeing would be like saying Icarus got a slight sunburn.

The company is set to testify before Congress next week, which could hand it a browbeating at the hands of pearl-clutching government officials who will certainly hem and haw about the company’s miscues.

As they should, and “miscues” is putting it very lightly. These mistakes led to the deaths of hundreds of human beings.

If you recall, Boeing 737s have killed 346 people in two separate incidents within one year: Lion Air Flight 610 that went down in Indonesia last October and Ethiopian Airlines Flight 302 in March.

What in the hell went so wrong? If your entire business is to make flying machines that transfer people safely across the world, how do you crash two planes in a year without the help of some hideous maniacs hijacking the damn things?

The key here is the Maneuvering Characteristics Augmentation System (MCAS). For those of us who cringe at the very thought of deciphering what that means, here’s a quick definition:

It “adjusts horizontal stabilizer trim to bring the aircraft nose down when it detects that the aircraft is in imminent danger of entering an aerodynamic stall, based on input from airspeed, altitude and angle of attack sensors.”

Now, I’m anything but an aeronautics engineer, but I have flown on enough planes and and am smart enough to realize that if an automated system brings the nose of the plane down — INTO THE GROUND — there is obvious cause for concern.

Boeing didn't feel the same way, and the Wright Brothers must be propelling in their graves…

The crashes may have been avoided if the company listened to its heart instead of its wallet. I know that is a cliché thing to say when talking about investments, but here are a few horrifying tidbits that make me want to dump the company out of moral considerations…

Way back in 2016, a Boeing pilot warned the company of issues with the MCAS flight-control system — which was the major issue with both crashes. He said he “unknowingly lied” to regulators about its safety before they cleared the 737 to fly.

He may have had some "internal support" on his acquiescence.

Boeing also assumed that an MCAS failure had a safety risk that ranked as “major” — less severe than “catastrophic”, according to the National Transportation Safety Board. The company assumed pilots would easily recognize an MCAS failure and counteract it.

They didn't, and I'm hard pressed to find comfort in major issues versus catastrophic ones when I'm sitting with my family, 30,000 feet above the ground...

The biggest failure was the faulty sensors that measure the "angle of a plane’s nose relative to the oncoming air", which set off loud alarms that tended to confuse the pilots.

A confused pilot is arguably worse than a "funny" one who jokes around before a Southwest flight.

So why would you spend your hard-earned dollars taking flights on death traps, or investing in a company that is so blasé in its safety practices?

There are hundreds of great stocks out there that don't lie about what they're doing when lives are at risk. I've gotten in plenty of arguments with fellow investors about the “bottom line” and why you should be emotionally agnostic about your investments.

I'm not. I am emotionally invested in my investments. That's why I'm dropping Boeing with a 200% gain for my Crow's Nest readers.

But as far as "the bottom line" goes, the 737 MAX is still grounded. Revenue fell 21% year over year in this quarter. The company delivered five 737s last quarter. Last year, they delivered 138 of them in Q3.

They're going down, and unlike the passengers on those flights, I'm sure they'll eventutally get back up, but I'm not holding out a helping hand for them to do it...

There are too many reputable and honorable companies out there that I'd be happy to invest in.

My colleague Jason Simpkins studies the defense and aerospace industry in far more detail than I ever could. He's been covering companies like Boeing for many years now.

He recently highlighted a new technology that doesn't kill people: it saves them.