In the blink of an eye, they have gone from the shady kid selling drugs in the school parking lot to the principal of the high school.

The S&P 500 added 13.1% during the first quarter of the year, which is very good and almost twice the historical average return of 7%.

The biggest pot ETF, ETFMG Alternative Harvest ETF (NASDAQ: MJ), on the other hand, returned 54% during that time.

Even more impressively, 14 pot stocks have gained at least 70% since the start of 2019.

A few years ago, you couldn’t buy cannabis stocks in the U.S. outside of thinly-traded over-the-counter markets or if your broker allowed you to trade on the Canadian Stock Exchange or the Toronto Stock Exchange.

Frankly, it scared a lot of retail investors enough that they completely sat out the first wave of marijuana profits.

Fast forward to today, and many cannabis stocks have graduated to some of the largest exchanges in the world: the New York Stock Exchange and NASDAQ.

That is a huge deal... and if you are interested in making those returns, it’s time to pay attention…

Uplisting to a major stock exchange is a game changer for several reasons:

1) It legitimizes the company and judiciously vets its financials

3) And, most importantly, it allows them access to institutional U.S. investors, which will be a massive influx of capital as the years go on

It also puts the company front and center to audition for a buyout from a major beverage, tobacco, or Pharma company — which has happened to a few companies after being uplisted. It sent those lucky stocks soaring.

That’s just what we saw with Cronos Group (NASDAQ: CRON), a vertically integrated cannabis company with one of the largest and most scalable operating platforms in the global medical cannabis industry.

Cronos was the very first cannabis stock uplisted to the NASDAQ — way back in February of last year. It was a historic day for the industry, and it didn’t take long for it to pay off for investors... 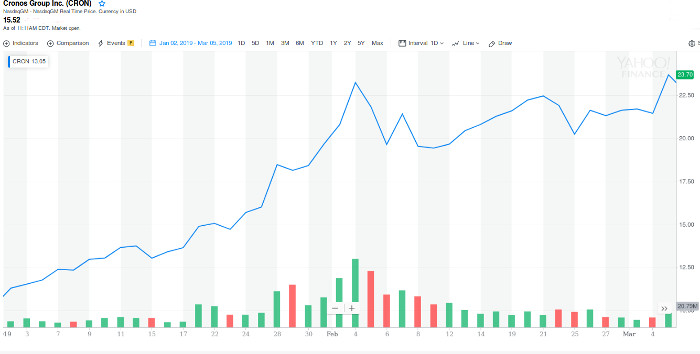 That’s a cool 211% in just months. Behold the power of the "uplist to buyout" frenzy!

Recently, a new cannabis stock was crowned, and it has potential to be the next big buyout target…

Just this week, Organigram (NASDAQ: OGI) became the most recent cannabis company to become crowned and uplisted to the NASDAQ.

Organigram is a Canadian licensed producer of medical and recreational marijuana. I’ve been following Organigram since 2015 — when my Crow’s Nest readers banked a very respectable 74% from the stock.

Back then, I thought that was a big score. But after banking countless triple-digit cannabis gains left and right since then, boy do I wish I had held on to Organigram...

It has quietly become a big player in the market, mostly due to its low-cost production. In fact, it is one of the most efficient producers in the space. While the industry average is around 100 grams of production per square foot, Organigram is more than double that. It expects to produce a whopping 231 grams per square foot.

That low-cost structure makes it an ideal buyout candidate for Big Beverage, Big Pharma, or Big Tobacco. These companies need reliable, scalable, low-cost cannabis and Organigram checks all of the boxes.

I compiled a list of five companies that also meet this buyout criteria.

Organigram is among them, so you can have that one on the house. As for the rest of them, I highly suggest reading the report so you can be prepared for the next "uplist to buyout" blowout.

Don’t wait, things happen fast. In fact, I’ve had to revise and update this report because three of my picks were bought out already.