The Fed's Engaging in a Danergous Mission...

When government workers and institutions stop asking what they are allowed to do, and start doing whatever they can get away with that serves their goals... well, that's when you know something is profoundly wrong.

The best term for this is mission creep. And once it happens, it's nearly impossible to claw back the powers or privileges and return them to legislatures or the people.

This has been going on for decades.

Just look at how bloated the Dept. of Homeland Security has become; watch as revelations about the NSA's unilateral and unconstitutional programs get increasingly worse; and consider how the Fed has expanded over the years, taking on a dangerous level of power that undermines the basis of the modern economy and capitalism itself.

Back in 1913, as the Federal Reserve Act rose out of a great money panic and bank run in 1907, J.P. Morgan almost single-handedly stopped it with the vast wealth and influence he wielded.

It was clear that the patchwork of national banks set up during the Civil War was fatally flawed.

The day before Christmas Eve, creation of the Fed was authorized for 20 years. Eight to 12 private regional Federal Reserve banks were created. A new currency, the United States Federal Reserve Note, was born. And all nationally chartered banks were required to become members by buying non-transferable stock of their regional Federal reserve bank.

Uncle Sam now had a single authority for banks, an elastic currency, and a way to rediscount commercial short-term, unsecured loans.

What happened next was mission creep kicked in...

The main goals of the central bank expanded to support maximum employment, stabilize price changes from inflation or deflation, and controlling interest rates.

Over the last 100 years, 200 changes have been made by law — and many powers assumed with flimsy legal support.

As it assumed new powers and stretched its legal authority further and further, it has become crystal clear that it has abandoned its mandates and is thwarting the free market.

First up is maximum employment. Official unemployment figures are designed to systematically ignore those that are not actively looking for work and those that are severely under-employed.

By combining long-term discouraged workers with marginally-attached workers and people forced to work part-time because they cannot find full-time positions, it is obvious that the Fed has either utterly failed, or has no desire to maximize employment at all. 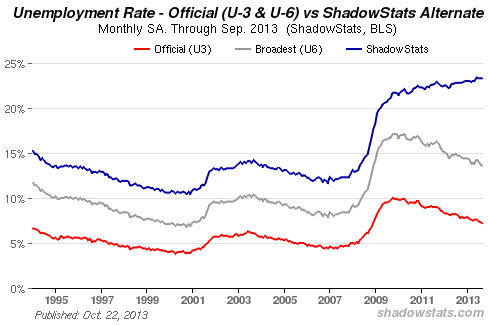 As for inflation, the official calculation has been changed more than 20 times since 1978. Each time, the equation was changed to lower official numbers.

If we stuck with the system used in 1980, inflation would be over 8%. Even then, cost-of-living increases disproportionately affect the elderly, who will see a paltry 1.5% Social Security benefit increase.

Once again, the Fed has quietly abandoned its duty to control prices. 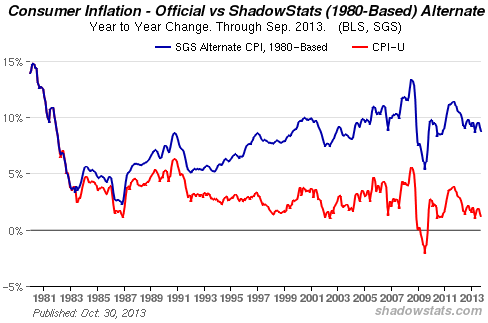 Both charts courtesy of shadowstats.com

Banks and corporations are now dependent on this flow of easy money. It has been used solely to enrich multinational entities, even while the credit market for small businesses and personal loans remains incredibly tight.

It cannot possibly use interest rate changes without making the situation it created worse — though it hardly seems to care...

After all, it has taken on a far larger job, and breaking down interest rates for loans and savings serves this new, self-imposed responsibility.

The Fed has assumed the duty of instilling market confidence and driving gains in stock prices. Never mind the asset bubble it creates.

It is now in charge of making the economy look good, even if it is a complete disconnect from reality. Just look at the disconnect play out whenever government and economic data is released. When the Fed announces the economy is still too weak to risk tapering the endless flow of money into the market, the market reacts by pushing the Dow and S&P 500 to new record highs.

Even hard data that should be the driving factor for the near-term outlook for equities have the opposite effect...

We're seeing negative outlooks in soft data, too. A good measure for this is the Citigroup Economic Surprise Indices. They compare actual data releases to the average expectations in Bloomberg economic surveys: If you examine the correlation to the S&P 500 returns in this data, you can see how the Fed has perverted and introverted the market...

It is a bit complex, but once you put it on a graph, it eloquently captures how the market is behaving when the economy is beating or falling short of the expectations of a broad consensus.

Here is a chart of it from Guggenheim: 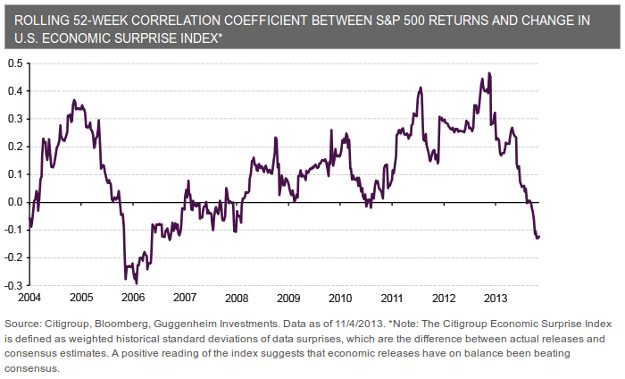 Reality, along with the quaint notion that economic data should be used as guidance for investors, has been perverted and inverted.

This trend will have to reverse itself. It is clearly unsustainable.

The Fed is creating an asset bubble by divorcing market performance from reality as traders binge on the 21% year-to-date returns like pigs at the trough. You have to go back to late 2005 through the end of 2007 to find any period in the last ten years where negative correlation was so pronounced. (Of course, that was the run-up to an implosion in the market and the Great Recession.)

By abandoning its true purpose and taking over the free market through one of the most egregious examples of mission creep in history, the Fed has set us up for another crippling blow.

As bad as things have become with the Fed, the trampling of our rights by the NSA and the police state, and the destruction of the lower and middle classes for the gain of a select few, I do believe we'll be stronger in the end...

It has been a long time since we've had to go through a trial by fire in our society. We may be due.

After reading the research Nick has been doing, I think reasonable minds will prevail in the end. I just hope the hardship won't be too much for many of us to bear.